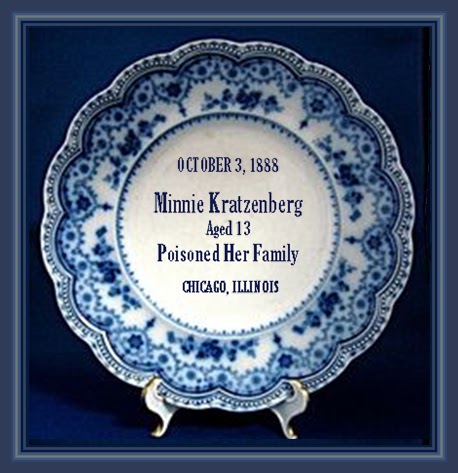 FULL TEXT: Chicago, Oct. 3. – One of the most remarkable cases of youthful depravity on record came up before Justice Lyon Tuesday morning.

One of the defendants was the little girl Minnie Kratzenberg, at 3100 Wentworth avenue, who put “rough on rats” into the food of her family with the deliberate intention of causing the death of her relatives. Her companion in trouble was Mrs. Margaret E. Snyder, charged with having instigated her to commit the deed. Minnie is a well-developed maiden of of 13 years, with dark features, black hair and black eyes. In these lurk the spirit of intense hatred, which glowed out at the objects of her displeasure as she stood in the dock before the justice. She cooly admitted every charge made against her, professing not the slightest remorse for what she did. John Deitz, step-brother to Minnie, testified to the family having eaten of the beefsteak which had been poisoned by the girl Friday night. He himself had been taken ill, and the mother now lies in a critical condition. Lizzie, the sister of Minnie, said that she made some soup Sunday and took a little to her mother, who was lying ill from the effects of the previous poisoning. When she came back to the kitchen she examined the bowl of soup more closely, and to her horror discovered that it was permeated with rat poison.

“What’s the matter with the soup!” she asked.

“I didn’t put anything in it,” said Minnie, guiltily.

Dr. Lynch attended the family and found Mrs. Kratzenberg suffering great agony. He discovered symptoms of arsenical poisoning and administered proper relief. Minnie was called upon to say what she desired.

“This woman,” she said, indicating Mrs. Snyder, “told me to do it. I went to her house and said that my step-brother, John, had been scolding me. She said:’Why the devil don’t you poison him?’ I asked her how to do it. She told me to put carbolic acid in the milk, but said afterward that he would be apt to smell it. She then told me to put some ‘rough on rats’ on the beefsteak.”

The young girl then went on to tell in the most heartless manner how she had administered the poison, and how the first dose failed to operate fatally.

“I went to Mrs. Snyder,” she said, “and told her that it didn’t work. She told me to try another dose, and I went home and put a quarter of a teaspoonful in the soup.”

“You wanted to poison in his plate alone then, and not in the food which the whole family was to eat?”

The girl could give no reason. The only cause for Minnie’s strange conduct that could be given was a scolding which had been administered to her by her step-brother six weeks before on her neglect to prepare supper for him when the rest of the family had gone away to a picnic. On this occasion Minnie ran away to Mrs. Snyder’s house where she stayed awhile. On this occasion a slight quarrel arose between the woman and Deitz, but nothing serious resulted at the time.

Mrs. Snyder unequivocally denied every allegation of the girl. She said that she never spoke on the subject of her, and that she never spoke on the subject to her, and that the girl had not been in her house more than twice without being accompanied by her sister. She had no reason, she said, to instill such a devilish idea into the mind of a child. Justice Lyon could do nothing under the circumstances but hold the two in bonds of $1,500 to the criminal court.

No one seemed seemed to know just why the girl had made this strange and murderous attempt upon the lives of her relatives. Several inclined to the theory that it was pure depravity which instigated her, others that she was a subject for a court of insanity. Justice Lyon thought that her brain was peculiarly susceptible to impression, and that she was mentally defective.

[“A Youthful Borgia – She Calmly Admits She Tried To Kill The Family – Minnie Kratzenberg, Aged 13, Confesses to Poisoning Her Mother, Brother and Sisters for Some Trifling Grievance – She Accuses a Woman of Instigating Her to the Crime – Both Held to the Criminal Court.” The Alton Telegraph (Oh.), Oct. 3, 1888, p. 2] 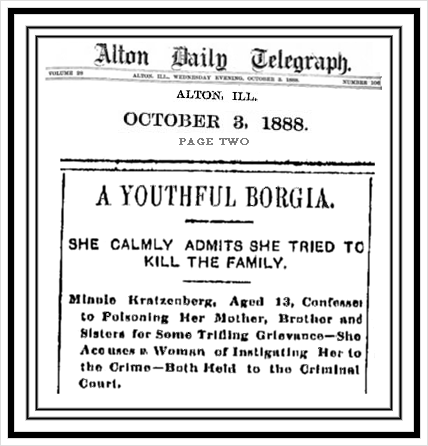