Wife in the Way: Female Serial Killers Who Eliminate a Wife to Marry a Husband 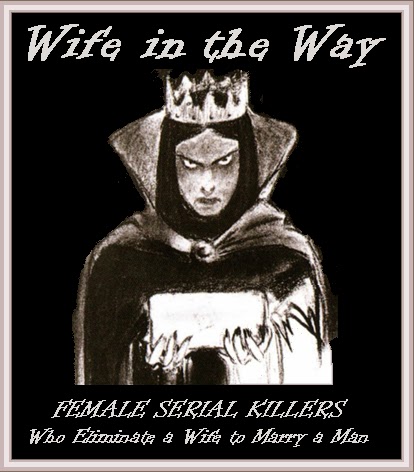 Fredegund is said to have strangled the Queen Galswintha in order to marry the king and to have murdered her three stepsons. Because her first two sons died in infancy, she accused a number of women of witch craft and had them tortured. She is also reputed to have ordered the assassination of Sigebert I of Austrasia in 575 and also to have made attempts on the lives of Sigebert's son Childebert II, her brother-in-law Guntram, king of Burgundy, and Brunhilda (sister of Galswintha).

Catherine Shoemaker was a very pretty girl in the employ of Mr. Sharp, a very wealthy citizen of Spencer County, Ky. Her mistress died – with a bad taste in her mouth, This Catherine married the widower, and he only arrived long enough to bequeath all his property to his young wife; when he died – with a bad taste in his mouth. – One more husband was to died before the black widow’s poisoning career was terminated.

It is … stated that Mrs. Danbrough had contemplated murdering a Mrs. McCloud, a neighbor, so that she might marry her husband, but these latter statements are not fully corroborated.

“Brigitte seems to have been very fond of married life, but unfortunate does not appear to have met with a husband entirely suited to her tastes.” She murdered her first husband before the honeymoon was completed. Number two was put out of the way a few months following nuptials. The murderess ran into problems when, after murdering the wife of her latest desired mate, a physician spotted the evidence of the poison homicide.”

She murdered sister so she could, she hoped, marry her brother-in-law. He declined, however, and thus was killed off too. [Jay Robert Nash, 1981]

“Mary Tressa fell in love with a married man with a wife and three children. She contrived to poison his wife and  the children, in the hope that she would then be able to marry the man herself.” Finally, she murdered the then-childless widower.

The woman Nemesis who gave the police important information regarding the deaths of nine persons that center mysteriously about Mrs. Louise Vermilya, and that promise to form the greatest poisoning mystery in the history of Chicago, was revealed today as Mrs. Minnie Mystock. She is employed in a bakery at No. 2902 Cottage Grove avenue. Mrs. Mystock is said also to have been interested in Bisonette, when Mrs. Vermilya said was her fiance.

Mrs. Demmer was investigated but not brought to trial. She was suspected of five murders. She claimed the man she was the housekeeper for (and “more”) had murdered his wife and later committed sucide. In any case, all the corpses exhumed contained arsenic. One of the deaths was that of a woman the soon-to-be-dead widower Mrs. Demmer was living with had been “paying too much attention to.”

“A young Japanese woman named Kaneko is being tried here on a charge of poisoning 18 people whose lives she had insured in her favour. Good-looking and well-educated, she cleverly tricked both doctors and insurance companies. First she murdered her sister, with whose husband she had fallen in love. Kaneko asked him to meet her at a Geisha house, where he told her that he had grown tired of his wife.”

Murdered the wives of two men, Bible and Malinsky, afterwards married them. Later on she murdered Mr. Bible. Mr. Malinsky fell under suspicion but was absolved by Elsie.

Marie Becker murdered Marie Castadot in the hopes of marrying the widower. Her passion was, however, unrequited.

African-American, 13 insurance murders, combining “Black Widow,” “killer mom,” killer step-mom.” She killed the wife of a minister to free him for marriage, then proceeded to murder him and the motherless children. She murdered 3 husbands altogether.

A variation on the theme. Laverne was suspected of having lured away husbands from their wives, marrying them, and then later murdering her matrimonial “catches.” 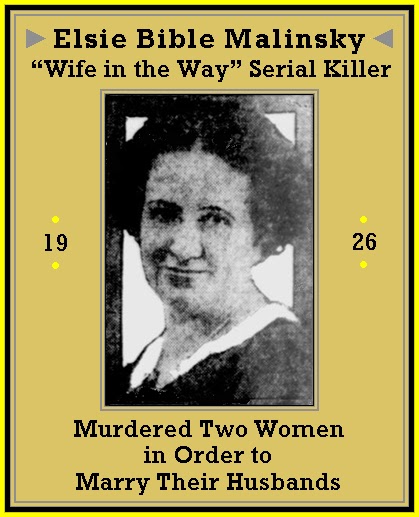