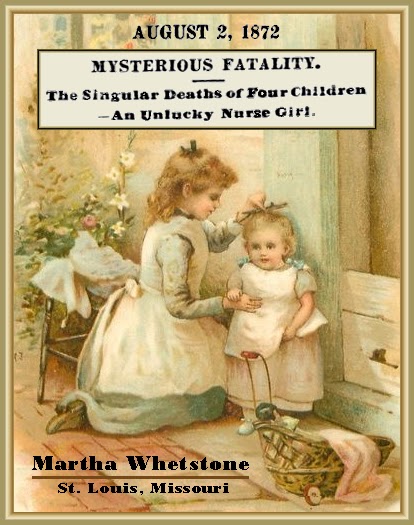 FULL TEXT (Article 1 of 2) A brief mention was made in the [St. Louis, Mo.] Times recently of the sudden death of George E. Watson, a little boy four years old, whose parents lived at 1,097 [?; partly illegible] Christy avenue. The Coroner made a full investigation and post mortem examination, but failed to discover any cause for the sad event. Certain facts, however, have become known which involve the whole affair in a mystery. The first tidings of the child's death came from a nurse girl who had been left alone with him some time previous. This is the fourth child who has died while left alone with this girl during the last four months. Her name is Martha Whetstone, and there is nothing about her particularly noticeable save, perhaps, a seeming lack of intellect. She is about sixteen  years old, has dull, expressionless features, and is of English parentage. Her parents live near Cheltenham. Thus far nothing has been discovered to criminate the girl, but a chain of circumstances point to terrible coincidences, if nothing more.

Last April Martha was employed as a nurse girl in the family of a butcher named Kohler, living on the Manchester road. – She had charge of the children, a little boy of three or four years and a baby. One day the mother came home after a temporary absence and found the youngest child dead. It had been left alone with the girl, and, although troubled with some childhood ailment, was not thought to be really sick. – A physician was called in who heard the statements of the girl and pronounced the cause inflammation of some vital part.

One afternoon, several days after the death of the baby, the mother came into the house where she had left the girl alone with the little boy, and missing the latter, made inquiry for him. He was a bright, adventurous youngster, and the unwonted silence made the mother anxious. In reply to the question, the girl said that while she was left alone with the boy, he climbed upon the cupboard and then fell off. She picked him up and found that he had hurt himself. She carried him up-stairs, and placed him upon the bed. The mother at once went to the room indicated and found her little boy a corpse. An inquest was held and a verdict of death from concussion of the brain was returned. Nothing was found to implicate the girl directly or indirectly, but inasmuch as there was nothing left for her to do, she was discharged and went home.

Several weeks later a sister of the girl, about four years old, died very suddenly and under very peculiar circumstances. The mother went away from home leaving the little girl in Martha’s care, and when she returned was met with the announcement that the child was dead. The cause of the last death was declared to be heart disease.

A few weeks ago Martha came to the city and obtained a situation as nurse-girl in the family of Mr. Watson, on Christy avenue. The boy, of whom she had the special care, was a bright, healthy little child, and at the time of his death was perfectly will with the exception of a cough. When the mother went out Thursday afternoon she left directions with Martha to give the boy certain things which he wanted in order to have a tea-party with a playmate. When the lady returned, Martha met her at the door with the exclamation. “Mrs. Watson your baby is dead.” The mother turned into the house and found the dead body of the little boy lying on the floor in the dining room.

The circumstances are given by the girl as follows: The little boy played about the house for some time, and when he got ready for his tea-party was grieving because his playmate did not come. She offered to play the part of company and set down at the table with him. They ate supper together, and had a good time. Afterward, while she was clearing away and washing the dishes, the little fellow complained of being tired, and said he would lie down and take a nap. He curled himself up in one corner of the dining room, and soon dropped to sleep. She passed through the dining-room once and saw him sleeping quietly. Going in the second time she thought something was wrong, and accordingly went to him. She put her hand on his heart and found that it had ceased beating.

A physician was summoned, and it is reported gave it as his opinion, after examination, that the child had met with a violent death. Those who first saw it say that there was a purple tinge about the lips and face, but otherwise nothing noticeable.

The event has caused intense excitement in the neighborhood where it occurred. – The authorities have made careful inquiries and investigated matters fully, but, as already stated, ran find nothing of a criminal character. The bereaved family have gone to Ohio with the body, and the girl has returned to her friends in Cheltenham.

FULL TEXT (Article 2 of 2): It is not easy to understand the constitution of a human creature who can deliberately resort to murder as a pastime. Even such monsters of depravity as the French peasant executed a few months since, who was proved to have followed assassination for a livelihood, with as much system and as little compunction as a mechanic in following his trade, are less difficult to comprehend. But where are psychologists to place a young girl who devotes herself to killing little children, with the same zest and pleasure that other girls of her age might take in a new dress, or a dance or an evening at the play? That was ascertained about a year ago to be the favorite diversion of Agnes Norman, the London nurse girl, who had already sacrificed a half dozen of the hapless little innocents put in her charge, before she was discovered or even suspected. And the other day there turned up, in St. Louis, another nurse girl, who, if not a second Agnes Norman, is certainly the most unlucky nurse girl that ever lived. She is named Martha Whetstone, sixteen years of age, and noticeable in no way, except as being rather dull of intellect. Hereafter she is likely to be remarked for more fatal peculiarity. Since last April no less than four children left in her charge have died when alone with her, one of them being her own sister, four years old. In one family where she was employed to take care of two children, one an infant, the other a little boy of three or four years, the mother returned one day after a brief absence to find the bay dead. Soon after, during a similar absence, the little boy fell from a cupboard and so hurt his head that he died. In another family, the mother went away in like manner, leaving her only child, also a little boy, in perfect health, alone in Martha’s care. On her return he, too, was found dead. The death of the girl’s sister occurred under similar circumstances.

Here certainly is a chain of most startling coincidences. Yet a coroner’s jury have failed to find anything criminating the girl is innocent her situation is one of peculiar hardship, since her ill fortune will lessen very much her chances of making a livelihood. Few parents would care to employ a nurse of so ominous a record. If she be guilty no pains should be spared to find it out, since the the crime is at once one of the most detestable and the easiest of commission. The memory of Agnes Norman may excuse if it did command the strictest scrutiny into so unfortunate an experience as that of Martha Whetstone. 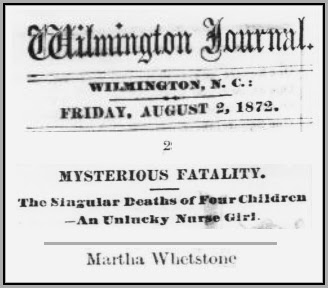