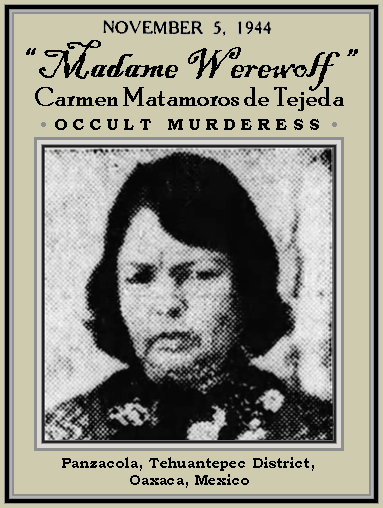 NOTE: If the two babies were confirmed to have been murdered by the suspect (with others suspected), it would seem reasonable, based on the likely intent to murder the Soledad Garcia at some point as well, to classify Carmen Matamoros de Tejeda as a serial killer. Two different spellings – “Matamoros” and “Matamoras” – appear in English language news reports.

***
FULL TEXT (Article 1 of 2): Apizaco, Mexico, May 20. – Excavation of the flower-covered yard of a home near here proceeded today under the direction of state authorities investigating the reported disappearance of 16 children.

Half-hidden among roses, daisies and bougailvillea vines in the yard is the opened grave where police earlier this week found the bodies of two children.

In jail at Tiaxcala, the state capital, a few miles away, the occupants of the home, middle-aged Carmen Matamoros de Tejeda and her husband, Angel Tejeda, factory worker, continued under guard to prevent any lynching attempts during investigation of the case.

The two were arrested after a 16-year-old girl, Soledad Perez Garcia, told police she had been imprisoned nude in the house and mistreated. She directed police to the grave. Police later disclosed they had reports of 16 missing children. 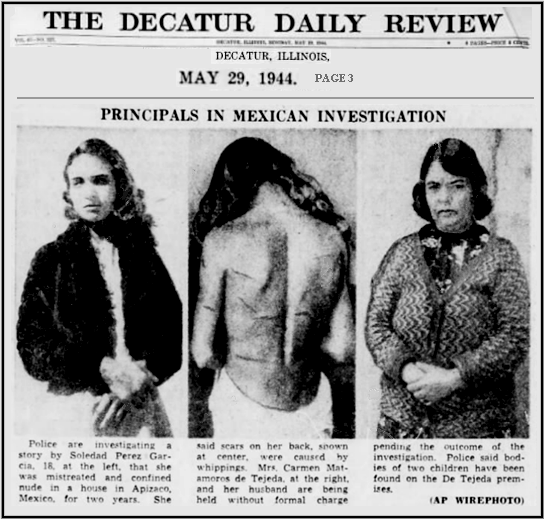 FULL TEXT (Article 2 of 2): New York, Saturday. — When police of Mexico City swooped on an eerie house and garden in the quiet town of Panzacola to free a nude, half-crazed, 18-years-old girl, whose chained body bore savage imprints of teeth, strange welts, and hideous scars, they uncovered a cesspool seething with the paraphernalia of witchcraft and black magic. But more petrifying was the subsequent discovery of the bones and bodies of two tiny babies, and from the surrounding countryside swelled the enraged roar of “Burn the witch” as Senora Carmen Matamoras de Tejeda, owner of the house of weird cults, was held fast in the local gaol to await her trial.

FLASHY Senora Matamoras, arrogant, and with lingering traces of a once handsome appearance, has been held on a charge of detaining in slavery the nude victim, Soledad Perez Garcia, and of frequently whipping and torturing her.

Tempestuously she has defied the police, denied having committed any crime, and remained impassive while a search goes on for more tiny bodies, because on her a clamoring populace has now fixed the blame for the disappearance of 16 babies in recent years.

She has been labelled “Madame Werewolf” [presumably "Mujer Lobo" in Spanish]. Her 18-years-old victim has told of having been bitten by the woman until blood flowed and she fainted from pain. The villagers speak with horror of the long, pointed teeth and vulpine mouth of the Witch of Panzacela. 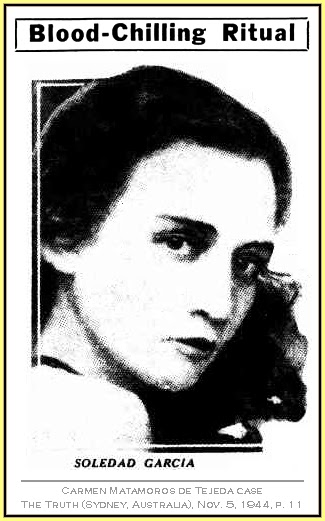 In the walled patio of the House of Horrors was found an altar, on which was enshrined the skeleton of a jackal or dog. The skeleton was flower-bedecked and candles burned at its feet. Beneath the altar was found the body of the first infant.

Nearby the bones of the second child were unearthed and experts were called in to investigate a case which had moved from plain, sadistic cruelty to the realms of necromancy and diablerie.

Slender Soledad Garcia looked younger than her 16 years when she disappeared from her home in the large neighboring town of Apizacb two years ago. Recently her father was told anonymously that the girl was held captive in a house at Panzacola and had been seen emaciated and terrified at Mass one morning under the relentless guard of Senora Matamoras.

When she had been rescued from her diabolic imprisonment, doctors and nurses said they believed that some of her scars had been caused by repeated attacks by a dog, but close examination revealed the marks to be those of human teeth. Then the girl told, of her nightmare with Madame Werewolf.

Sometimes, she said, she was taken to the altar in the patio. There her jailer, with blood chilling ritual, would light the candles before the skeleton of the jackal, then sink her great teeth into the girl until she collapsed from the pain.

The girl told her father: “I was forced to go naked around the house and the patio. Only when it was so cold that I might die did she give me something to cover myself. She would smile and say that she didn’t want me to die of the cold, that she was planning the pleasure of killing me soon in a different way.”

A few days before her rescue, the girl was forced to dig her own grave by the altar, while Madame Werewolf cracked a whip. Followed the visit to church, be cause, Senora Matamoras explained, Soledad was to die next day.

From time to time, the girl was rented or sold to men. Once she was raffled, 300 participants each paying 12s for a ticket. With the winner, she was locked in a room, her arms bound. Next day, relentless Madame Matamoras appeared to reclaim her slave.

Soledad was also subjected to the revolting caprices of two of her captive’s nephews, and was once sold to a lawyer. He returned her next day, and the Senora whipped and starved her because she had not pleased the elderly satyr. 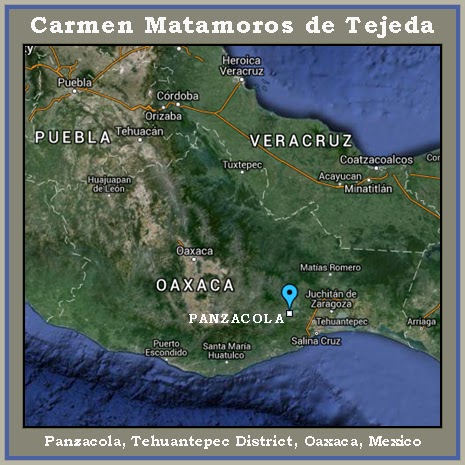 The martyrdom of Soledad Garcia became a secondary issue when she divulged strange rites, meaning of which she had no conception, that occurred in the moonlight, before the altar bearing the animal’s skeleton. In the course of one ghastly ceremony, she said, a tiny child had been slain.

Advice from experts on the criminology of witchcraft has been sought by the police. They find analogies in the case of Senora Matamoras and other similar horrors, perpetrated before altars enshrining the bones of dogs, hyenas and wolves.

Authors of these crimes, they say, immersed in sorcery, believed themselves to be transformed at times into the form of gross beasts.

“The circumstances of the Matamoras case,” says one authority, “contain so many parallels with past and present practice of the foulest forms of witchcraft that it has all the earmarks of that hideous category known as necromancy.”

Necromancy, this authority adds, is applied to that sorcery which employs corpses, bones and parts of the bodies of animals and humans and ritually murdered babies.

Case of notorious diabolist Gilles de Retz [sic: “Rais”], who once served as field-marshal for Joan of Arc, has been quoted by the experts. After sacrificing infants before an altar, he went about on all fours, foaming and gnashing his teeth, under the hallucination that Satan had transformed him into a wolf.

Children found in his dungeons bore teeth marks similar to those which scarred Soledad Garcia. 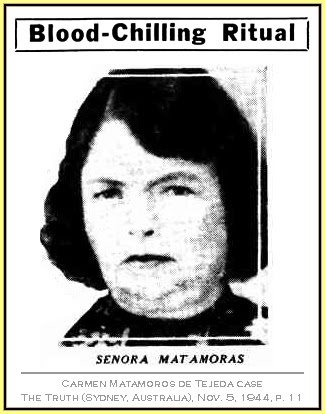 Hungarian court records contain the case of Countess Elizabeth Bathori, convicted for witchcraft. It was proved [not accurate; it was an apparently apocryphal legend] that she habitually bathed in the blood of young girls and infants, believing that by so doing she could transform herself into an enormous cat with power to pass through walls and locked doors to attack her enemies. [Bathory, The Blood Countess's actual crimes were not, apparently so much occult as sadistic sexual serial torture/murder, with a bit of non-religious cannibalism.]

Like Senora Matamoras, the Countess always kept one girl alive and chained. Her victim was continually whipped, beaten and tortured. This girl was the witness against the Countess just as Soledad will point chief accusatory finger at Madame Werewolf, unless new and more potent witnesses are found.

In Paris, in 1933, the police arrested an alleged sorceress, Yvette Rostaud, against whom the original charge was simply cruelty to animals.

In a panther skin, and to the accompaniment of tom toms, she tore live rabbits and puppies with teeth and fingernails. She had many degenerate audiences. But the body of a human child was later unearthed in the cellar of a country villa she once occupied. She was sent to an asylum for the criminally insane for life.

In a separate cell to his wife is Angel Matamoras, a textile worker. He sullenly repeats that he knows nothing of the charges against her, and never saw her abuse Soledad. About his wife’s witchcraft and the apparently murdered babies he maintains a grim silence. 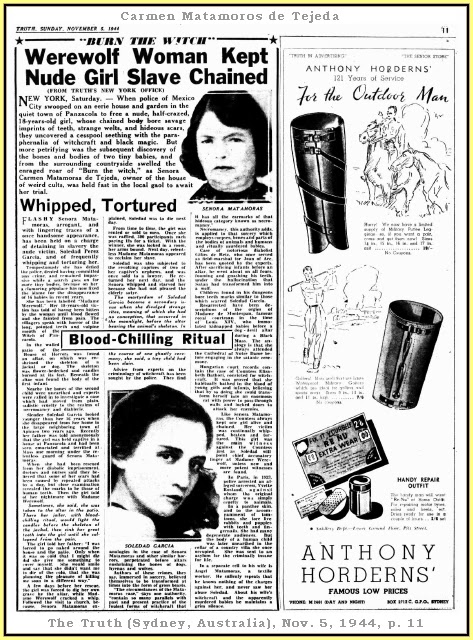 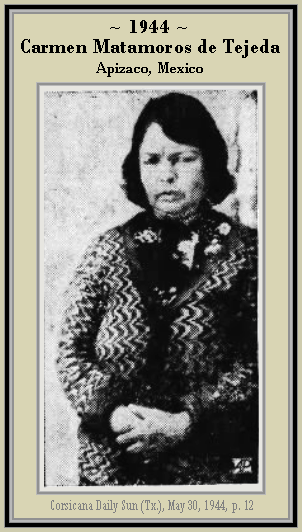 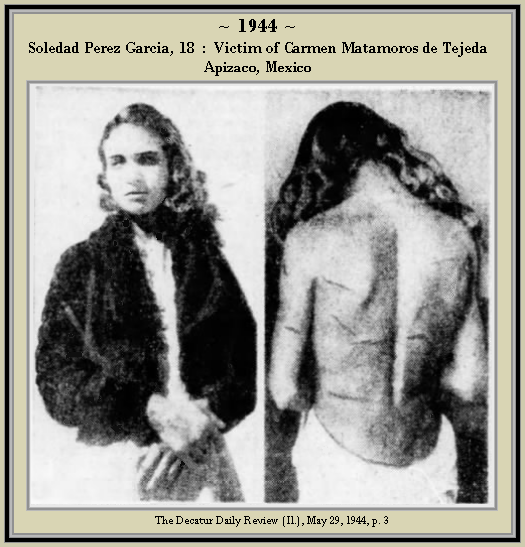