Dorothee Buntrock, Half of a Serial Killer Couple - Germany, 1892 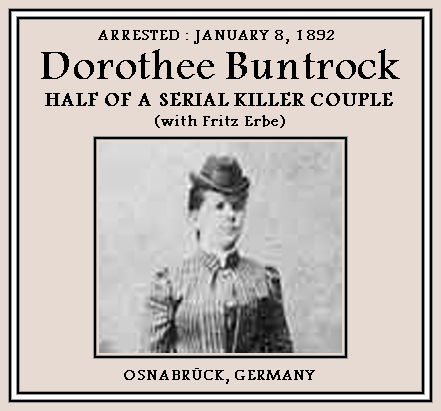 The couple, Dorothee Buntrock and Fritz Erbe, likely committed more than the two murders that they were convicted of and executed for. It is common in prosecutions of serial killers to indict for only one or two murders that can be efficiently proven in order to secure a sure conviction, while allowing other suspected or incompletely proved cases to go unprosecuted.

Some reports give the name as “Dorothea”

In 1890, Fritz Erbe and his lover Dorothee Buntrock placed job advertisements of the same name appeared in several newspapers in the Westphalian and North German regions. They sought young women, preferably from a good family, who wanted to serve in an unnamed aristocrat’s household. Several women replied to the ad. Two of the respondents, in May and August of 1890, disappeared. Nobody knew what happened to Emma Kasten (30) Dora Klages (17). More than a year later the two women’s dismembered corpses were discovered in remote forest areas.

It was later learned that two girls responding to the ad became suspicious because of Dorothee’s nosiness and refused to walk with her (to what would have been the site of their murder.) Another respondent missed her interview with Dorothee because her mother failed to wake her on time to make the appointment. [Friedlander]

In November 1891, a forest keeper from Magdeburg, on patrol through the Neuhaldesleben forest, whose agitated dog led him to it, a badly decomposed and gnawed bare torso next to a tree root, which was lying around in the open. Then discovered a pair of severed arms and legs and the head.

Investigators located a witness who described the employment agent who placed the job offer advertisements. The description led to the identification of the 30-year-old tailor Dorothee Buntrock, who had since moved to Osnabrück and taught at a girls' school as a tailor. On January 8, 1892, Detective Schmidt, the chief investigator, from Magdeburg, arrested Frau Buntrock there. The suspect was wearing a dress and jewelry, it was soon revealed by the aunt of the victim, that had belonged to the murdered woman.

Frau Buntrock confessed and described the murder. She had solicited to lure women for her paramour Fritz Erbe, whom the man intended to rape and murder. She held the victim’s head while her partner cut her throat. Dorothee incentive was clothing and jewelry. She also got 60 marks (about $15 US) from the corpse. Further aggressive questioning revealed that she had interviewed four young women in August 1890.

The method used by the killer couple was for Dorothee to lead the victim to a fork in a road at the separate paths to Lohe and Weyhausen and then pretend she was lost. Then she would suggest that the girl take a break and wait for a passer-by who could show them the right way. after a few minutes her accomplice Fritz Erbe would stroll past. The trio would walk a while, picking blackberries. The couple would attack the victim, Dorothee putting a gag in her mouth.

Police managed to get Dorothee to tell them the location of the still-missing remains of Miss Klage. Her memory was imperfect. On March 19, 1892, locals searched but found nothing. Eventually, a week later, the county postman Eggers found them some 200 meters from the place Dorothee had directed them to.

The rape, murder and dismemberment of the first victim in the forest created a bloody mess. They would carry a bottle of water to clean up the mess the next time. From the nearby town of Eschede, they drove back to Hanover.

Dorothee was almost 39-weeks pregnant when she lured 17-year-old Dora Klages to her gruesome death. Erbe raped the girl and decapitated the girl with a butcher knife while he was still kneeling on her. The pregnant accomplice testified later that Dora’s headless body "fidgeted" for ten minutes before becoming completely lifeless. Erbe took the portable shovel he regularly carried with him and dug a hole. Dorothee stripped the body of its clothes. She could not easily remove the girl’s ear-rings finger-rings so she took a knife and cut off the ears and fingers. The pair further dismembered the corpse, dumped the pieces into the hole and covered it with moss.

The killers left an empty water bottle at the crime scene.

During the June 1892 trial in Magdeburg Dorothee revealed herself to be a simple-minded psychopath.

Presiding Judge: "You knew the girl had no money, and yet you murdered her?"
Dorothee Buntrock: "But Miss Klages had very nice things."
Chief Judge: "Because of such trifles, you butchered the girl like a cow?"
Buntrock: "She had a very pretty dress."

Prosecutor Maizier hinted that the suspects had committed other murders, yet he lacked sufficient evidence to charge them. The couple was convicted on June 29, 1892. In the subsequent sentencing hearing they were sentenced to death. They were executed by ax early on May 24, 1893 in Magdeburg

FULL TEXT: The agent Fritz Erbe and the seamstress Dorothea Buntrock, who were sentenced to death by the Magdeburg jury court for luring two girls into the forest, murdering them, robbing them and then burying the corpses, were executed by ax early on the 24th of this month in Magdeburg.

Mar. (?) 1892 – On the basis of a request from the public prosecutor's office in Magdeburg, who believed in further victims of the couple, the relatives of the 17-year-old Dora Klages from Hameln.

Mar. 12, 1892 – body of Dora Klages located. police scheduled an on-site visit to Eschede. B Buntrock remember the exact scene of the crime.

May 24, 1893 – Buntrock and Erbe were executed. Decapitation with axe. 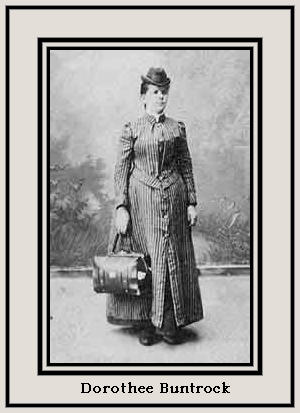 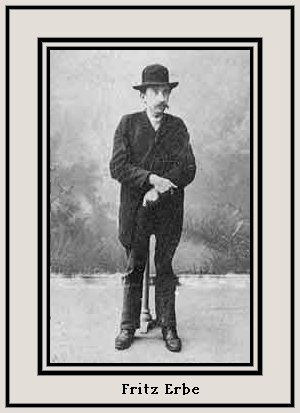 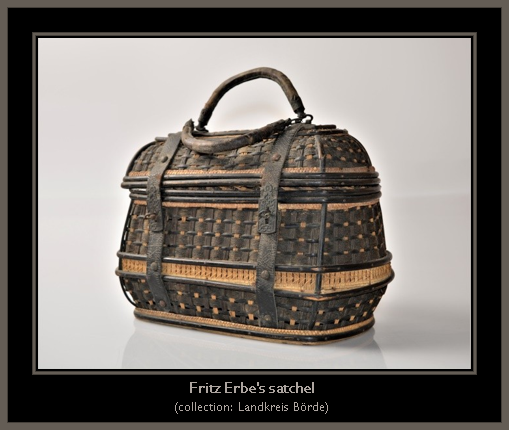 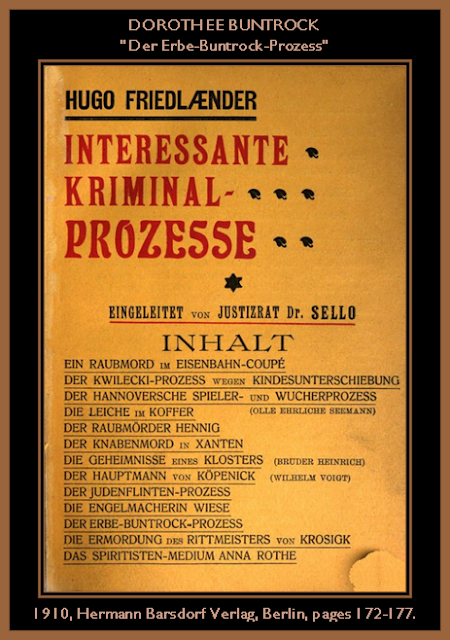 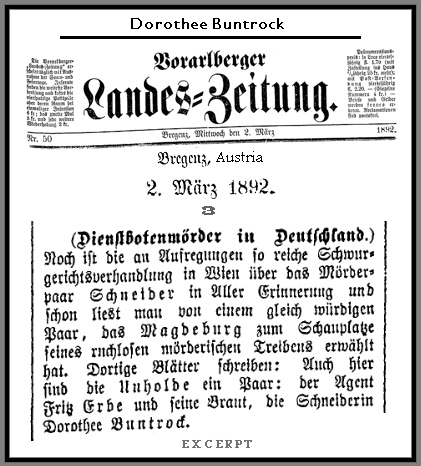 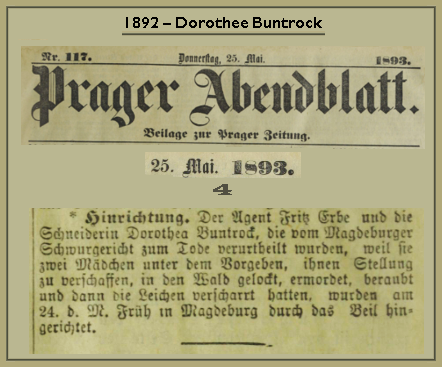