100 years ago: Insurance Against Alimony Slavery 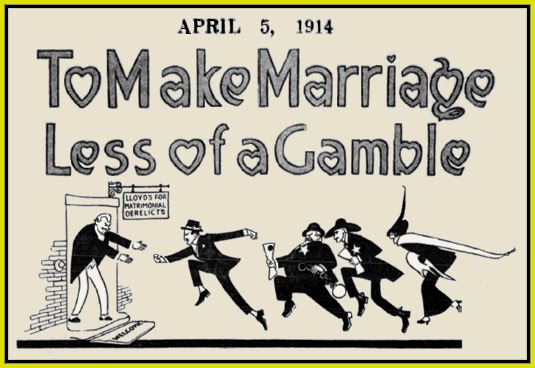 FULL TEXT: Widespread recognition in Christian countries of the element of chance in marriage has created the saw that “marriage is a gamble.” Human frailty, the swamping of the sense of proportion and of foresight by the love vibrations, unforeseen complications, all menace the matrimonial bark. It is, in fact, conceded that no lottery ever offered ingenuous patrons a greater risk. Witness the manifolding of divorce.

An ingenious and philanthropic plan for lessening the risk in this greatest of human relationships has passed the incubation stage in New York. Not that a Solomon has arisen wise enough to guarantee that love will last, nor to propound a formula for the blending of human oil and water. That problem still baffles the magi. But an organization has been completed to make the hurt of sundering the ties less. It proposes to offer you, on your wedding day or before, an immunity policy. It will make your marriage gamble less by itself gambling on the risk.

It enables a man as he leads his blushing bride to the altar to reflect comfortably that if things don’t turn out right he has behind him a concern which will keep him from going to jail for not paying his alimony; while the happy bride can be happier in the conviction that if he doesn’t turn out right the same concern will provide her with the sinews of war to make him regret it and also provide her with the alimony he won’t or can’t pay.

To the objection that such a proceeding is destructive of true romance the promoters answer that it is romance that puts the mar in marriage and that it is the plain intention of the plan to substitute a little useful business foresight. the objection that it is immoral. In that it affords protection against certain consequences of breaking the marriage vow, and so, in theory, encourages such violations, the promoters point to similar insurance taken out by physicians, dentists and automobilists. The doctor will take out a policy which insures him against the financial consequences of malpractice or carelessness, even to the killing of a patient; the dentist takes out insurance against the consequences of pulling the wrong tooth, or breaking the jaw or infecting the patient; the automobilist in the same way takes out insurance that puts the cost of the thing when he smashes another machine or runs over a pedestrian upon the insuring company. 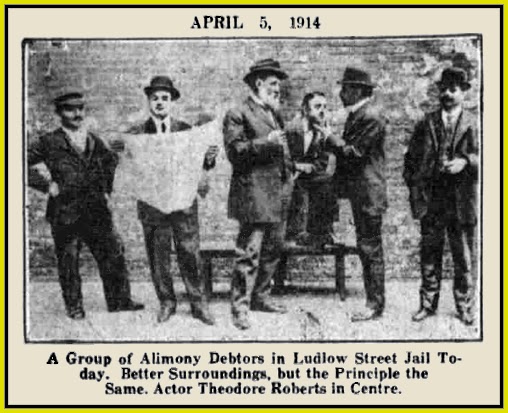 Three are acknowledged and “legitimate” risks. It might be urged that the doctor’s and dentist’s policy puts a premium on inefficiency and stupidity in that if either knew that damages must come out of their own pockets they would be more careful. And the automobilist would not drive so recklessly if he knew that damages. Would come out of his pocket instead of the rich companies. So the alimony insurance men point out they are at least in well-known if not distinguished company. Besides, they say anything which will keep a man from the criminal absurdity of loafing in prison because he can’t pay a debt, or help along a poor abandoned wife, has much better morals in it than the cases of the professional men and autoists.

Furthermore, whatever profits accrue to the concern will not be used for dividends, as in the case of the insurance companies. They will be used, instead, to promote uniform divorce legislation throughout the United States.

Mr. Mimbeau L. Towns, the distinguished New York attorney, is the founder of the relief measure, which came into being at the time the handsome and romantic actor, Convay Tearle, was cast into Ludlow Street Jail, that New York dungeon for debtors and matrimonial delinquents.

“Five men who have married and suffered sympathized with Mr. Tearle,” said Mr. Towns, who has curling white hair, a luxuriant beard the color of snow, flashing dark eyes and the gift of poetic imagery. They are men of high standing locally and in the professions or business. One is rated as the owner of eight millions. They proposed to help Mr. Tearle and others like him. Realizing that a man might spend all his life in jail because the law permits him to be rearrested again and again for non-payment of alimony, while in jail we planned his relief. How was it done? It was very simple. Each of the five men contributed $800. Out of the $4,000 thus collected they paid the paltry $400, which represented Mr. Tearle’s failure to pay his wife a stipend at $25 a week for four months.”

To the Ludlow Street Bastile for Husbands, where Mr. Tearle was not languishing his specialty is not languishing, but champing his bit and saying rude and profane things about the laws of New York – went Mr. Towns on his errand of mercy.

Picturesque language, freely punctuated, bitter, staccato speech burst from the handsome prisoner. With arm on high and waving fist he bade Mr. Towns desist. He advised the attorney to choose less dangerous objects for his jokes.

“My boy,” began the lawyer when the actor stopped, “you are free. The newly organized Lloyds for Domestic Derelicts has paid the alimony. You will sign this note promising to repay the money in three months at six per cent and free from these clanging gates joyously as ever bird flew to yon mountain.”

Back went Mr. Tearle to Mrs. Tearle the second – formerly the charming Roberta Menges, known us the “Pearl of Sheepshead Bay” the cause and reward of his troubles with the first. 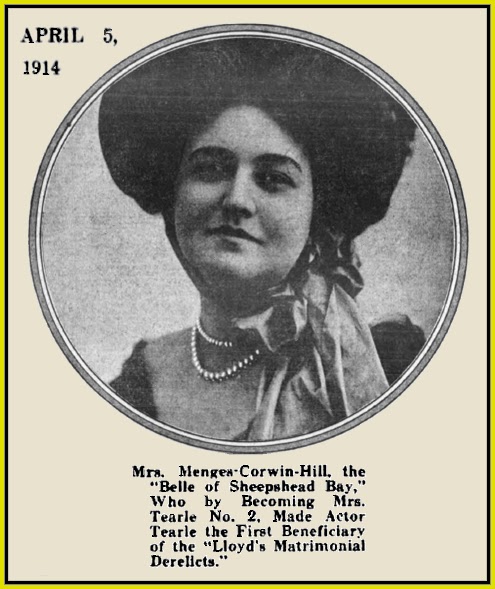 The promoters then went into executive session, drew up articles of incorporation, and these have now been passed upon and been O. K.’d by the Department at Albany.

“But we have another and higher purpose than alimony immunization in founding this organization,” said Mr. Towns. “A part of the surplus will be applied to the establishment of universal divorce laws legislation and to the abolition of imprisonment for debt.

“Divorce laws of New York and several other States are in a most chaotic condition. By a decision rendered last week by Justice. Samuel W. Greenbaum, a man who has been married for twenty years to his second wife may illegitimatize their children and cast her off on the plea that his second marriage was null.

It is unfair that the marriage contracted in Connecticut should have no standing in this State and that the wife in. that second marriage should be without social or legal standing in another State. The abuses accruing from lack of uniform divorce laws in this country cry out to heaven.

“New York is branded with a further shame the existence of imprisonment for debt in but one other State may a man be arrested for debt And Delaware is an archaic State, for it still has the whipping-post

“We are already at work in Albany upon a bill for the abolition of the Ludlow Street Jail shame, I have, here a message from an official in Albany who says: There will be no trouble at nil to secure the repeal of the Ludlow Street Jail act for alimony provided you act promptly. I am sure it will go through at once. When the organization has done that work in New York It will try to extend its humanity-aiding agencies to other States. If the Ludlow Street Jail and the cruelty it represents are abolished, half of Lloyd’s object for existence will be gone. That pushed, we can save men the embarrassment and ignominy of owing back alimony, which is as bitter to the spirit as the durance in Ludlow is oppressive to the body. 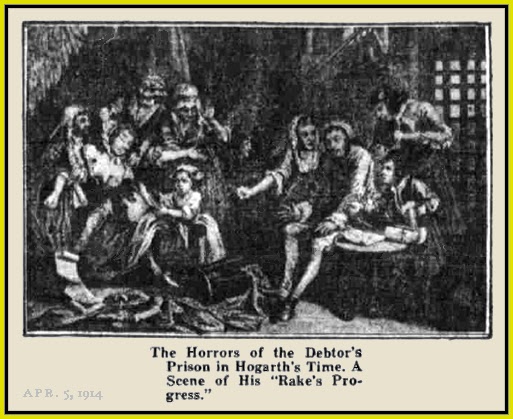 “Look at some of the pictures by Hogarth of the horrors of imprisonment for debt in his time. The surroundings are not so bad to-day but it is still the same horror in its essence.

“What of contributory negligence?” a representative of this newspaper asked Mr. Towns.

“Nonsense,” said Mr. Towns. “It a watchman in a bank knows how much wealth he is guarding he may be tempted to steal it. But has it ever occurred to you to give human nature the benefit of the doubt? Why think the worse of people? Think the best of them. They will rise to it.

“‘Be noble, and the nobleness that lies in others

Sleeping, but not dead, will rise to meet your own.

“The husband will pay weekly what we deem he is able to pay. Ho may make no more reservations with the Domestic Derelicts Association than he did with the Government when he filled the income tax blanks. If the weekly wage is ten dollars or less, we might require him to pay ten cents a week or less. If the salary be seventy-five dollars a week, he might be expected to pay seventy-five cents a week or less. The amount he and ‘Lloyds’ would have to arrange. The amount of the premium fixed, he has only to keep it up. Then, in case the matrimonial ship strikes the rocks, his wife will smile, even though bitterly, and on his own visage may be seen a reflection of that smile, for he won’t have to go to jail if he falls into arrears in alimony.

“On the other hand, if she belongs to the association she will not be distressed by her inability to employ a counsel to force her husband to pay or go to jail. At the same time she will be paid reasonable alimony. That is the privilege of the female member of ‘Lloyds.’

“Why do we call it ‘Lloyds?’ I will tell you. They will insure a ship ten days overdue. We are as courageous ns they. We insure matrimonial barks. Lloyds, of London, will insure lost jewelry, a cork leg or a flesh one, a tenor voice, the life term of a frock, or a scalp from baldness. We will insure lost happiness.”

“But suppose a wife and a husband both insure and then the marriage goes to smash?”

“We will be just to both,” said Mr. Towns. “It’s just the situation we want to create like two negatives making a positive.”

Mr. Tearle was the first beneficiary of the organization. Two others are about to feel its beneficence. The first is Theodore Roberts, the well-known actor, who recently for a debt to his wife, from whom the court had granted separation, endured the gyves for six months and is liable to be flung into jail again for the same offense if he dares to step upon the soil of Manhattan Isle. The other is Dr. Charles M. Hendricks, who in Raymond Street Jail, Brooklyn, sits in Achilles-like wrath thinking reminiscent thoughts, including Miss Laura Bigger. Dr. Hendricks say he reads by the stars that be would remain in jail for another hundred years but for the mercy of “Lloyds.” and “Lloyds” is inclined to be merciful, even though Dr. Hendricks has been adjudged his wife’s debtor to the amount of $60,000. In the enforced calm of Raymond Street Jail the doctor has been permitting the milk of human kindness, curdled in his bosom, to flow out to the world in the form of bitter epigrams against women, love and marriage.