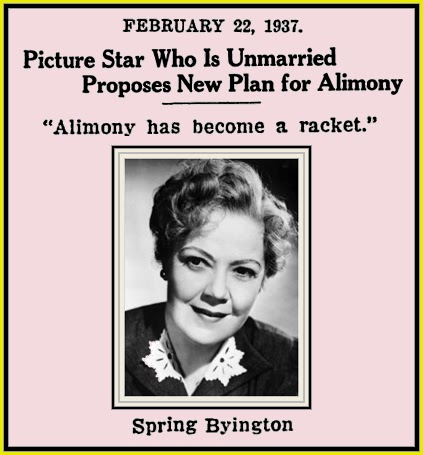 FULL TEXT: Hollywood, Feb. 20 – From Hollywood – no less – pretty Spring Byington of the films set out today on a campaign to revise California’s divorce laws with the declaration:

“Alimony has become a racket.”

The actress – she isn’t married – is campaigning for introduction of a bill in the state legislature which would make the term of alimony payments the same as the lenth of time the woman lived with her husband.

“If alimony were awarded a woman only for a period of time equal to the length of her married life, it would tend to fulfill the purpose for which it was created.

“That is, a woman who has given the best years of her life to a man would find financial protection, if she sought it. Conversely, these marriages that last only a few months, or at the most a year, would not turn out so profitably for the woman.”

She said that under no stretch of imagination could she see “the justice in saddling, for perhaps many years, a man with alimony payments who discovered after a comparatively short time that he had been married specifically for his money.

“After all, the theory of alimony is to protect a woman who has relinquished her ability to support herself. She deserves this protection. But like many other laws that were well conceived, the alimony law is being abused.

“It not only is providing thousands of undeserving ex-wives with a comfortable living, but it has been twisted into a weapon by which women vent their hatred on the men they once loved.”