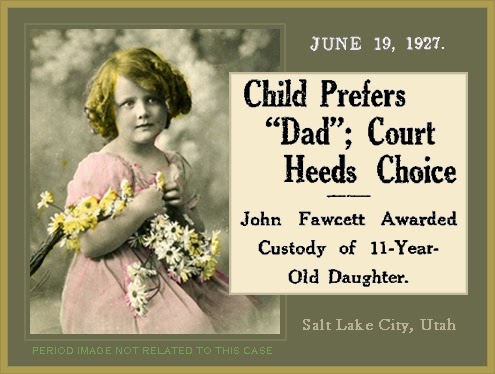 It was one of those cases where there must be so much sadness whichever way the judge decides. Judge Chris Matheson has had it in charge.

The little girl’s mother is dead. The mother and father were divorced, she alleging desertion and failure to provide in 1913. The child was given to the mother and the mother in turn lived with her own mother, Mrs. A. Mellick, according to the evidence.

The mother, on her deathbed, asked Mrs. Mellick to keep the girl, according to the evidence. Mrs. Fawcett died in July, 1926.

In a few months Mr. Fawcett laid claim to his child, contending he was entitled to her custody as natural parent. He did so through habeas corpus proceedings and on December 16 the court order that on his filing a bond of $1000 he should have the child to June 15, 1927, and on that date produce her in court for further hearing and final settlement. He has remarried.

The matter was hotly contested at the time. The grandmother claimed the child’s affections, and little Margaret in December turned her eyes toward her eyes toward her and away from the father. It was hard for the court to make the order. He gave the man an opportunity to care for his child, win its love and make good his claim to her.

On June 15 the grandmother failed to appear, and the court ordered permanent custody to the father, but reopened the case when Mrs. Mellick requested it.

Further hearing was had and the court held that the father had proved his right. He upheld the doctrine that the natural parent should have first claim. A grandmother was turned away sorrowing with the comfort only that she may visit the child, who now lives in Los Angeles whenever she chooses, under a part of an order. Mrs. Mellick lives in Salt Lake.