“For Protection of Men”: Against Being Murdered - 1895 1895: back then it was called chivalry, today it is called feminism: the assumption that a woman has a right to kill if she claims afterwards, even without a shred of evidence that she was “abused” (a term that includes, according to professional domestic violence operatives, virtually anything and slight that upsets a woman, including a boyfriend (or non-boyfriend she regards as a boyfriend) who does not return phone messages regularly enough).

In 2013, we have, in Canada, the spectre of law professor Elizabeth Sheehy calling for the legalizing of pre-meditated homicide (provided that the killer provide to the government a standard allegation of “abuse” of some type, or even a statement she felt “afraid” for some reason or other – no need to prove or justify or support with evidence of any kind).

It becomes clear then that the “boring” old stuff that goes by the name of “history” is increasingly pertinent value for those seeking to understand and resist the authoritarian irrational cult called gender ideology.

Here is an account from the mid-1890s showing how, despite the typical chivalric inclinations of the average man (chivalry being a particularly strong ethos in the South of the US South), a group of men organized themselves for the purpose of formally demanding respect for the rights of males, despite the ages-old tradition of female privilege that pervaded their nation. 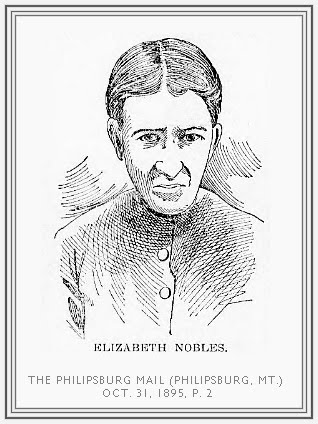 FULL TEXT (Article 1 of 2): Macon, Go., Aug. 8. – The voters of Twiggs County have passed resolutions calling on the Governor not to interfere with the hanging of Mrs. Dibble Nobles, who has been convicted of the murder of her husband."

Several weeks ago, when sentence was pronounced the women took up the idea that Mrs. Nobles had been driven to her crime by the exactions of her husband, and they started a petition to the Governor to commute her sentence. They wrote to sister societies in other States, and already letters are coming in from New York, Massachusetts, Illinois, and other States protesting against the death sentence for a woman. So strong has the move become that the male citizens of the county held a meeting and issued the following call for the protection of men by the execution of the female murderess:

"Whereas public sentiment is such in this country and vicinity that if executive clemency is granted under, each circumstances it would be difficult in future to prevent lynch law for murderers,

"Therefore, we earnestly protest against the extension in any form of executive clemency for this murderess, polluted with the lifeblood of her husband, and do hereby declare our perfect confidence in our chief magistrate and the belief that he will not swerve from the performance of his sworn duty by a desire to cater to a weak sentimentalism or transient public feeling, inspired, as be is, by a desire for equal justice and the sacred execution of our laws."

There have been three women executed previously in Georgia a husband poisoner, about 100 years ago; a girl accomplice in a murder, about twenty years ago, and a negro woman who was active in the notorious Eastman riot.

[“For The Protection of Men – Georgians Protest Against Clemency for a Woman Man-killer. – She Must Die The Death - Curious Resolution by Citizens of a Georgia County Looking to the Better Protection of Men From the Vengeance of Women Who Are Murderously Inclined.” The Evening Times (Washington, D.C.), Aug. 8, 1895, p. 2]

FULL TEXT (Article 2 of 2): What shall be done with the women who murder with the knife or pistol pr poison?

In a Georgia case where a woman murdered her husband, the governor is overwhelmed with petitions for her pardon, but it will be noted that the people of the county where she lived have held a mass meeting to protest against executive clemency.

In New York a strong effort will be made to save Marie Herbert, the slayer of her seducer, from the death penalty.

Speaking of these cases in The New York Press says:

Generic man is more chivalrous than he is credited for being. In recent years only one woman has been put to death for murder in the state of New York. Three or four others have been sentenced to capital punishment, since 1887, but their lives have been saved, mainly through popular protests. “Protect the woman!” is the first sentiment heard when she becomes involved in the meshes of law. indeed, the greater the crime, the more severe the threatened punishment, the louder is raised the demand that she go scathless or inadequately punished. In short, man practically has two codes – one for rigorous punishment of male offenders, one of redress and rectification for women who do wrong, save it be one in.

Our contemporary, The Memphis Commercial-Appeal, discusses the question on the same line with the following illustrations:

Some of the most depraved criminals, some of the most conscienceless homicides, have been females. The Druse woman, who was hanged in New York a few years ago for killing her husband – chopping him to pieces with an ax and secreting his remains – deserved her fate. The Georgia woman, Mr. Nobles, who is now under sentence for hiring a negro to kill her aged husband, went about her work with the coolness and premeditation of a fiend, and should not be allowed to escape the severest punishment. These are instances fresh in the mind, but the criminal calendar is foul with such cases of female wickedness. In the Forum for August Major Griffiths, her majesty’s inspector of prisons, mentions as cold-blooded and callous murderesses as Catherine Hays, who caused her husband’s death and wished to cut off his head with a penknife and boil it; Mrs. Mrs. Manning, who dug the grave for her victim three weeks ahead, in front of her kitchen fire, where she roasted and ate a goose the afternoon of the crime; Kate Webster, who dismembered the corpse of her mistress and boiled it piecemeal; Mrs. Browning, who flogged her two apprentices to death after starving them shamefully; Sarah Malcolm, the charwoman, who committed a triple murder, incited thereto by the sight of her mistress’s wealth in coin and silver plate. Mothers have murdered their children fror the insurance money, while the typical poisoner, Anna Zwanziger, followed poisoning for a livelihood. Any number of examples might easily be placed in evidence where women are heartless as the “Mr. Williams” whose crimes are written up by de Quncey. But the foregoing will suffice to substantiate the position taken, that while but few woman are “born” criminals, as contended by the Italian savants, Lombroso and Ferraro, some of them have been so lost to humanity and committed crimes for which execution on the gallows or in the electric chair could not be tortured into “outraging humanity.”

The Memphis paper holds that it is going a little too far to exempt a woman from the penalty for a fiendish murder simply because she is a woman. In the clear, cold light of justice and reason this conclusion seems to be the right ones. If women wish to escape the death penalty, they should not commit murder.