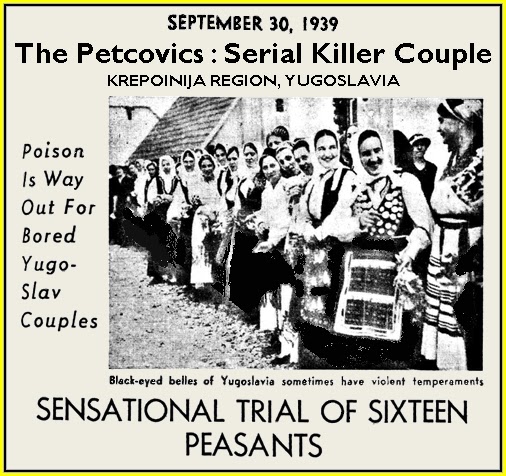 FULL TEXT (Translated from German): Belgrade, May 31st. - A monster poisoning trial has begun before the Pozarevac District Court, in which almost all residents of the eastern Serbian town of Krepolje appear as accused. The main accused is the "village witch" Stanka Penovic, who brewed a poison with a safe effect from various poisonous plants for all those villagers who wanted to get rid of any family member or relative About twenty people died one after the other without knowing exactly what the people had actually died of. Most of them were women who, with the help of the "village witch", sent their husbands, their parents, their siblings, even knew how to get rid of their own children to their deaths  for material advantages or other advantages. A number of death sentences are expected.

FULL TEXT: Sixteen peasants, each one accused of poisoning husband or wife or relative in order to marry a lover or get at an inheritance, are on trial in the district court of Passarovic [in Serbia]. Sketchy or even non-existent medical supervision in backwoods areas made possible the long series of mysterious sudden deaths

Blegrade, July. 30. – A sensational poison trial has just begun in the district of court of the city of Passarovic, Yugoslavia, a trial with few precedents in the history of all crime. Sixteen peasants, men and women, have taken their places on the benches reserved for the accused. They are variously charged with having expedited the death of a husband or wife or close relation [note: all victims mentioned in this article are male] by administering strong doses of poison.

The mere reading of the indictments would offer pointers to the most dramatic of detective stories. Young peasant women having allied themselves by marriage with rich, old men, then gave way to a strong temptation to rid themselves of their burdensome husbands in order to inherit their fortune and then marry their lovers. In other cases children administered poisonous food to their fathers and thus entered quickly into possession of their long-coveted patrimony.

Such horrible facts have been revealed by the inquiry.

It had been noticed that the small district of Krepoinija during 1936, 1937 and 1938 an unusual number of men in perfectly healthy and robust condition died in strange and mysterious ways after remarkably short illnesses. Suddenly they would be taken with terrible pains, and, after a few days, would die in horrible suffering. Since medical supervision is almost non-existent in the country districts of Yugoslavia, the deceased were buried before anybody could establish the real causes of their deaths.

Then one day Farmer Dragomir Pasojevic presented himself at the local police station with a story for the chief.

“I have just overheard a conversation between my brother Krsta and his wife, Persa Kolarcevic,” he said. “They are planning to poison her father, who is eighty. He recently decided to get married again. They wouldn’t stop at anything to keep from losing the inheritance. Something must be done quickly.”

The police immediately started an investigation. Soon they found that a couple of providing poison to the inhabitants of the locality.

A search was made of the Petcovic household. In the clothes-closets the detectives discovered much arsenic and numerous pots and boxes of dried, poisonous plants, and vials of snake venom. The quantity of noxious material discovered at the Petcovics was sufficient to end the lives of the entire population of the district.

Investigations revealed that the couple had cleverly extended the circle of their acquaintances among the peasants of the locality until they had gained the confidence of a large number. In this way they had been able to line up possible clients who would pay well.

There is the case of Irina Pitic, now 22 years old, married at 18 to a rich peasant of 68. nut everyone knew she loved a young shepherd who would not marry her because she had no dowry. Irina had hoped that the old peasant would die soon and leave her his fortune, but the old man was strong. Meantime it was suggested to the young woman that she get rid of him with a strong dose of arsenic. She finally agreed to the plan and at the end of the week she was a widow.

A peasant woman, Militza, is charged with having put a powder she got from the Petcovics in the soup she served her father, who was 76. she was his only heir and her husband was eager to get the inheritance immediately, so as to be able to straighten out his financial situation.

Naum Novacovic, another peasant, and his wife are charged with having poisoned their nephew, who had land from his father and mother. His uncle, Naum Novacovic, had been named his guardian and trustee and they wanted the boy’s fortune.

After eating the poisoned food he was served, the boy collapsed with violent stomach pains, and developed a burning thirst.

He asked for a drink but his aunt refused him. The suffering boy still had the strength to drag himself as far as the courtyard, where he drank from a bottle of stagnant water. The next day he was completely recovered. Naum Novacovic and his wife denied having tried to poison him.

Another woman is charged with having poisoned her husband with whom she had lived for 42 years, with a powder obtained from the Petcovics. She had for many years been the mistress of a young laborer on the farm. Immediately upon the death of her husband, she began living openly with this young man.

But among the cases listed in the indictment, that of Jagoda Jeftic, 29, is without any doubt the most tragic. She is also accused of having given her husband poison. On the day the funeral was taking place, the house was full of mourners. Somehow the vial containing the remainder of the poison fell into the hands of her son, who was only seven years old. The child drained the vial and died two days later in the most terrible suffering. His funeral was celebrated just four days after his father’s.

Cases mentioned in this article:

Požarevac (Serbian Cyrillic: Пожаревац, pronounced [pǒʒareʋats]) is a city and the administrative center of the Braničevo District in eastern Serbia. It is located between three rivers: Danube, Great Morava and Mlava.  As of 2011, the city has a population of 44,183 inhabitants, while the city administrative area has 75,334 inhabitants. 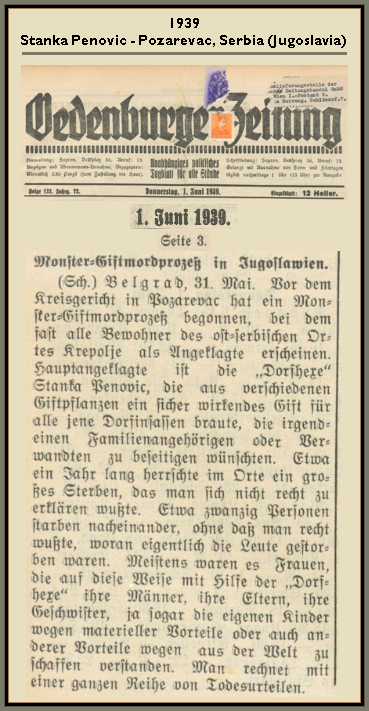 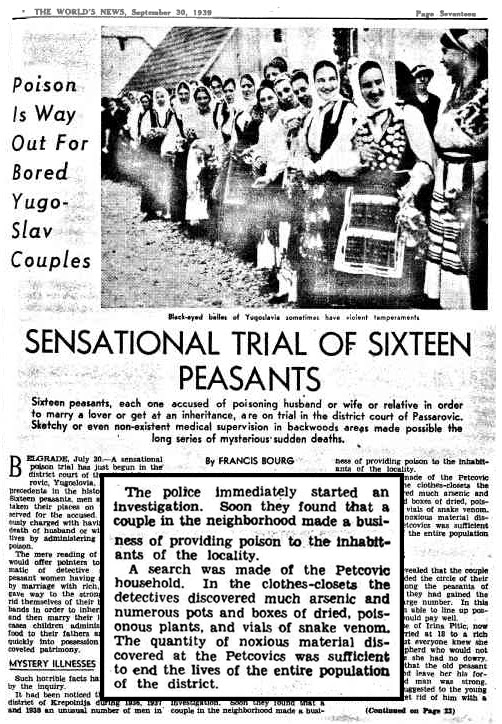 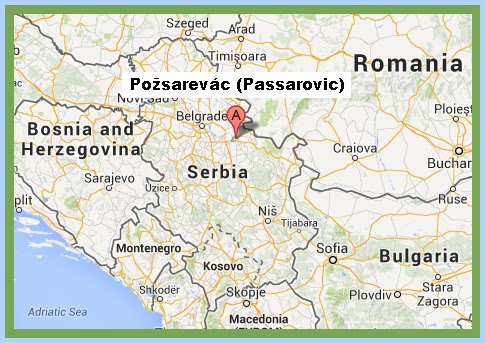