Wife Defends Herself from Husband’s Oppressive Abuse (Abused = not always getting your way; Defense = initiating violence) - 1909 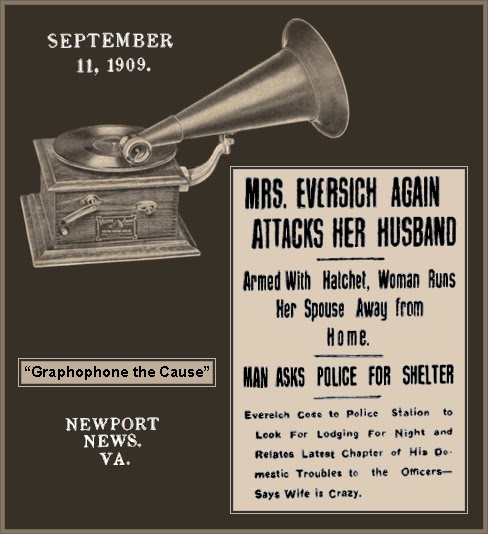 Why men’s shelters are needed: anecdotal evidence from the dark ages of institutional patriarchal oppression, incessant rape and wife-beatings (i.e.: before women’s suffrage).

EXCERPT (Article 1 of 2; excerpt from article on several cases): Two true bills were returned yesterday in the case of Mrs. Josephine K. Eversich, who on July 25 twice shot her husband because, it is said, he insisted on playing the gramophone. She first fired a 22-calibre rifle, inflicting a slight wound in the arm, but later in the day she shot him with a 32-calibre revolver, the ball entering Eversich’s left leg just below the knee and shattering a bone. Eversich was in the hospital several weeks and his wife was held a prisoner at the city jail until he was able to get about and arrange bail for her. This case was set for trial tomorrow.

FULL TEXT (Article 2 of 2): Mrs. Josephine Eversich who twice shot her husband, Antonio Everisch on July 25, and who is now out on bail pending her trial for that crime, attacked her husband again last night with a hatchet and drove him away from the family home, 512 Thirty-fifth street.

After being driven out of the house, Everich went to the police station to seek lodging for the night and while »here he related to the officers the latest chapter of his domestic troubles, he says that the row last night started over an apron his wife was wearing When the supper dishes had been washed. Mrs Eversich announced that she was going to visit her cousin, who lives nearby. Eversih told her to take off the apron before she left the house.

It seems that this request or demand angered the woman and she set fire to the apron, burning it up This provoked a quarrel which terminated when the woman grabbed up a hatchet and made for her spouse. Remembering the graphophone incident, Eversich decided that discretion was the belter part of valor and he did a “hot foot" for the front door. Mrs. Eversich followed brandishing the weapon, and when she found that her quarry had made his escape she told him that he had better spend the night out as it wouldn't be healthy for him to return to the house.

~ Their Happiness Not Complete. ~

Eversich also told the police that since he was released from the hospital and his wife from jail their happiness has been broken. They have quarreled frequently and she has accused him on numerous occasions of having left the hospital, where he was suffering from a pistol-bullet wound in the left leg, and gone to the family home and made off with the $32 which was taken from the place on the night following the shooting. Everslch says that the charge is absurd as the bone in his leg was shattered by the bullet and he could not walk a step. This accusation, he says, together with other peculiar acts on the part of his wife has led him to the conclusion that she is crazy.

Eversich was limping slightly from the effects of the wound when he appeared at the police station last night. He was dressed in his working clothes, consisting of a suit of overalls, and he told the police that he would not he admitted to a hotel in that garb. The station keeper said he could not sleep at the station unless he wanted to be locked up in the "jug." Eversich declined this kind offer and left the station house, stating that he supposed would have to lodge in a dry goods box all night.

Mrs. Eversich's case was called for a preliminary trial before Justice Christian yesterday morning in the police court, but if had to be continued on account of the illness of an important witness she was not arrested last night.