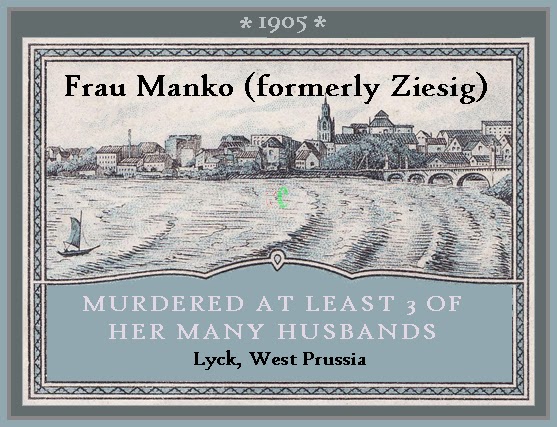 FULL TEXT: The trial of a woman named Manko has begun at Lyck, in West Prussia. Manko is known as the “female bluebeard,” and has had an extraordinary career. A  woman of extreme beauty, she was married eleven years ago, when eighteen years of age, to a man named Zirsig who died suddenly after three years of an unhappy conjugal life. Her second husband also died suddenly, while her third lord shot himself with a revolver, but circumstances connected with his death raised the suspicion at the time that the revolver had been placed in his hand after death. Years of adventure followed, some of them spent in Paris, in which she had three or four matrimonial experiences, ending disastrously to her husbands, who either disappeared or were divorced. The body of her first husband, Ziesig, has been exhumed and although so long buried, sufficient strychnine was still found in the remains to kill two men. About ninety witnesses are to be examined, among them being a man from Paris with whom Manko lived.