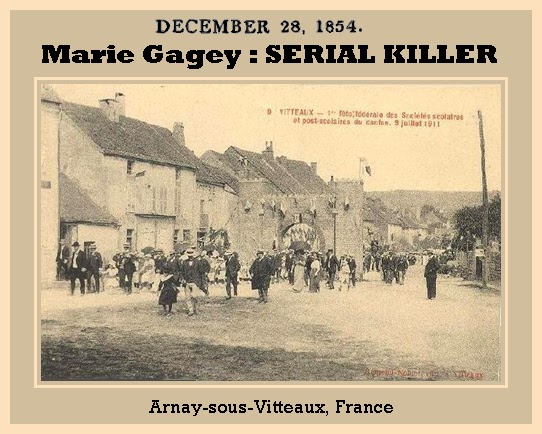 FULL TEXT: The court of assizes of the Cote d’Or, has just been occupied three days (says Galignani) in the trial of a woman named [Marie] Gagey, aged thirty-five, for poisoning an old man named Dougerelles, formerly a workman at the Imperial printing office, lived for some years at Semur on a pension of 600 fr., and had besides a considerable sum in his possession. In September last year he resolved to remove to Arnay-sous-Vitteaux, and he arranged to board and lodge in a public house kept by the woman and her husband. He went there on the 2nd October, and took with him in his portmanteau a sum of 9500 fr., chiefly in gold.

The woman knew that he was well to do, but she asked her servant who carried his portmanteau up stairs if it was heavy, and if she had not heard money chink in it. On being answered in the affirmative, she said “He is well off, the old fellow!” and she subsequently told another person that her new lodger had at least 3000 fr. Some days after Dougerolles, after breakfasting, was seized with violent vomitings and pains in the bowels. The medical man who was called in did not doubt for a moment that he had been poisoned. He employed all the resources of his art; but the old man died after a few hours’ of dreadful sufferings. The next day the judge de paix went to put the seals on his effects, and found that his portmanteau had been forced open, and it contained no money at all, nor anything of value.

It immediately became rumoured, that the map had been poisoned and robbed. On this, some gendarmes were placed in the house to prevent anything from being touched until a judicial investigation could be made, After a while, the woman taking advantage of a moment in which she thought herself unobserved, slipped a little packet from a cupboard into her pockets. The packet was seized, and was found to contain arsenic. Questioned as to how the become possessed of the poison, then stated that she had found it, in the presence of a neighbour, under the bed of Dougerelles, a few days before his death; but the neighbour positively denied that she had done anything of the kind. She was arrested, and the body of the deceased was examined. The stomach exhibited all the signs of poisoning, and a considerable quantity of arsenic was found in its contents. Arsenic was also found in what he had thrown up.

The arsenic, it appeared, had been put in some coffee, and this coffee had been prepared by the woman. Before the man’s death she had been inconvenienced for money; immediately after it she paid a creditor 200 fr., her husband paid another 507 [semi-legible] fr., and on searching her house about 700 fr., were found.

Moreover, part of the man’s clothes were discovered secreted on her premises, after her arrest, it was discovered that in April, 1845 one of her husband’s aunts named Claudine, died suddenly, and with all the symptoms of poisoning, after being attended by her, her husband being the woman’s heir. In December, 1849, she went to visit another aunt of her husband, to whom he was also heir, named Reine Comrad. When she arrived Reine was in good health; but on accepting some bread and wine, offered by the woman for her breakfast, she was seized with rocking  pains in her bowels, and after repeating vomitings and frightful sufferings, died. In March 1851, one of the woman’s own children, a girl aged only fourteen days, was suddenly seized with vomitings, and died. In May, 1852, another of her children, a boy, aged four days, was also seized with vomitings, and died.

The bodies of the two women and the two children were dug up, and in the bowels of all arsenic was found. In addition to all this there was strong reasons to suspect that the accused had, in 1845, poisoned a woman named Bernard to whom her husband owed a life rent of 300 fr.; that woman having been taken ill after being visited by her, and having died with all the symptoms of poisoning. The jury brought in a verdict of guilty, and the court condemned the woman to death.

Marie Gagey was convicted of 5 murders and executed, according to a 2012 article in La Bien Public. 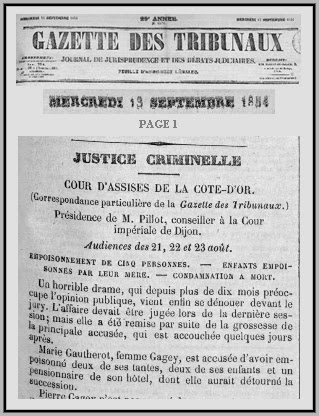