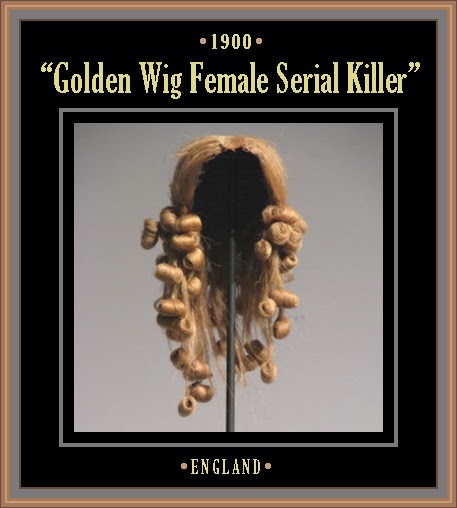 NOTE: The following fragmentary description does not indicate whether the case in question, in which a woman had poisoned three persons, involved the death of each victim nor whether the crimes were serial in nature. The case is, nevertheless of great interest, thus it is included in the serial killer category her provisionally pending the discovery of more details.

EXCERPT: Another notable example is that of an old woman with gray hair, who becomes homicidal when she is deprived of a beautiful golden wig suited to a girl of seventeen. The experiment was tried one, but so much violence resulted that the Commissioners recommended that she should be allowed to retain her headdress.

Before admission to the asylum she had poisoned three persons. But the wig and plenty of pink powder keep her peaceable and content.

FULL TEXT: It is a curious fact that many insane women are possessed with an insatiable vanity and a mania for “make-up,” says the London Express.

Sometimes the only way to keep the peace with such patients is to allow them a certain freedom in the use of cosmetics.

A wave of unmanageableness often passes over the woman’s side of an asylum if the material of a new uniform dress deserves the title of dowdy.

Many insane women will tear a somber brown gown to shreds. But if it is a pretty blue or a smart red, they preserve it carefully against spots and dust.

The effect that dress has on the insane is so well known that the Lunacy Commissioners make special comments in their official reports to the Lord Chancellor on the colors and materials of the gowns supplied to women in the various asylums.

Very clever devices to obtain cosmetics are resorted to by patients infected with the mania of vanity, who have been accustomed to artificial aids to beauty.

They soak paper roses in water and use the tinted result as a check reader. Or they put the red covers of books borrowed from the asylum library in a basin of boiling water and bottle the carmine fluid for future face use. Fresh flowers of reddish tinge are crushed and used on faded checks and wrinkled skins.

One former society beauty, now in an asylum, is perfectly tractable so long as she is allowed to water a curly false fringe and to use a modified amount of rouge and powder. If these are taken away she becomes suicidal and refuses to eat.

Another notable example is that of an old woman with gray hair, who becomes homicidal when she is deprived of a beautiful golden wig suited to a girl of seventeen. The experiment was tried one, but so much violence resulted that the Commissioners recommended that she should be allowed to retain their headdress.

Before admission to the asylum she had poisoned three persons. But the wig and plenty of pink powder keep her peaceable and content.

The friends of patients who find their happiness in personal decoration bring them small packets of cosmetics, or rather they smuggle them in, for such articles are contraband and against the rules. Though their minds are gone, the patients are clever enough to make little holes in their mattresses and to invent most cunning biding places for their treasures.

In those case where restriction of toilet appliances increase insane outbreaks, the attendants let these little beauty stores pass by unnoticed. So long as the make up is not too evident the attendants do not interfere.

Strictly speaking curl papers are not allowed in asylums. As a matter of fact their use is overlooked. Curled fringes and wavy locks often make all the difference between peace and rebellion. The ingenuity displayed by feeble in turning every-day articles to facial use is often surprising.

A handful of flour, begged from the kitchen, is an excellent substitute for toilet powder, while gray or faded hair is sometimes tinted with a strong decoction of tea leaves. A tendency to tight lace to such tiny proportions as to interfere with sanity and bodily health in another foible of the woman with unhinged mind. Abnormal waists are counteracted by lacing the corset with elastic.

An insane asylum would not seem to offer many temptations to its inmates to rival one another in dress and beauty. But generations of women patients appear to make themselves happy by following a feminine instinct to be personally attractive.

[“Varieties of the Insane – Domestics, Wigs And Curl Papers In Demand In Asylums. – Brick Dust in Lieu of Rouge – Crazy Women Who Are Fastidious in Regard to Their Families – Rivalry of Dress Among the Mentally Unsound.” The Turners Falls Reporter (Ma.), Sep. 26, 1900, p. 7]