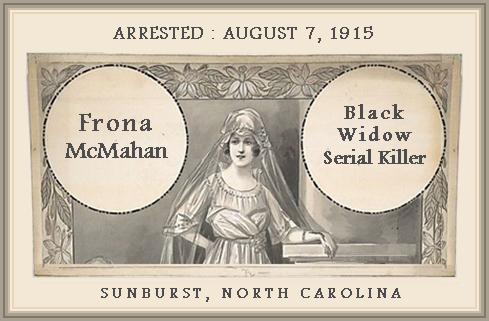 [Note: Some sources erroneously spell the name as “McMahon.”]

FULL TEXT (Article 1 of 4): Doug D. McMahon, a section hand on the Tenn. and N. C. R. R. was found shot and dying in his home above Sunburst last Friday [Aug. 6] morning about 5 o’clock, and a pistol was found about 2 feet from the left side of the bed on the floor.

Mrs. McMahan, the wife, was in the kitchen and another woman, Mrs. Hamilton, was in another room near by and they cried out. Charles Campbell was asleep upstairs and heard the shot and the cries of the women. He dressed hurriedly and came down. Mrs. McMahan gave him a lamp and he went in where the man was breathing his last on the bed. A pistol was on the floor. The wife did not go into the room.

Dr. McFayden, the coroner, held an inquest Friday and although the first news of the matter indicated suicide the jury was not satisfied with the theory and would not pronounce it suicide.

The funeral was held at Dillsboro Saturday and Mrs. McMahan was arrested and brought her for trial. A preliminary hearing was held in the court house yesterday afternoon before R. Q. McCracken, Esq.

It was shown that he must have been shot while laying on his back about a foot from the left or outside the edge of the bed and the shot went straight through the body, bedding and mattress. Mrs. McMahon never went into the room. The clothing was not much powder burned or scorched. The pistol was on the floor on the left side. These were the main suspicious circumstances the States representative, Grover C. Davis, relied on for holding conviction or holding the accused.

Gilmer Leatherwood represented Mrs. McMahan very ably. He put no witness on the stand. Mr. Campbell didn’t think the wife could have had time to be in the room do the shooting and return to the kitchen from the time he heard the short and her cry, just after which came from the kitchen.

After the argument Esquire McCracken announced that he could not find sufficient evidence to bind the defendant and she was released. – Mountaineer.

FULL TEXT (Article 2 of 4): Waynesville, Feb. 14. – In Haywood Superior court Saturday, Mrs. Frona McMahan entered a plea of guilty of manslaughter in having killed her husband at Sunburst, in this county, last August. Judge B. F. Long sentenced the woman to three years in the state penitentiary. Mrs. McMahan was tried at this term of court for murder in the first degree and after spending 53 hours in deliberation the jury was unable to reach an agreement, standing eight to four for conviction.

Mrs. McMahan is 34 years of age, and in the course of her short life has had six husbands, three of whom have died under suspicious circumstances and three of whom have deserted her. Small in stature [statue] and a decided brunette, she was the center of interest to one of the largest crowds ever attending a session of court here. Her story on the witness stand was most remarkable, and throughout the trial she maintained a perfectly calm appearance, never evincing any emotion even under the grueling cross examination to which she was subjected by attorneys prosecuting the case.

A native of this county, she testified that she was first married in Graham county, this state, when slightly under 16 years of age to a man named Thomas Meadows. That was April 4. On the 12th of the June following, Meadows killed himself in the presence of his girl wife and her two small sisters, shooting himself through the side. She was tried before a magistrate for having murdered him, but probable cause was not found and the matter was dropped.

Two years later in Tennessee she was married to William Metcalfe, with whom she lived for about five or six years, when he ran away with another woman. Without bothering about a divorce a little less than a year later she married William Gregory, also in Tennessee. Shortly thereafter he obtained a position at Proctor, in this state, and one day when he was journeying across the mountains to his home he was taken suddenly ill when about a mile away and died before aid could reach him. Less than six weeks the widow mourned for the departed for within that time David Shields had won her heart and hand. He was rather an old man and it was a month or so before he left for California without the formality of saying goodbye. The deserted wife was consoled by a younger man in a very short time, again without the usual divorce, this time to Luther Shields her truth being pledged. In the course of a few months, however, the domestic harmony was shattered, a lady from Little Rock, Ark., persuading the husband away.

Then came the sixth husband, Dove McMahon. The couple had been living as man and wife for nearly two years and were getting along fine at the big plant of the Champion Lumber company, at Sunburst, until one August morning last year the man was found dead in bed, a bullet hole through his heart.

The case against the woman was entirely circumstantial. She testified that he had gotten up and then came back to bed, she getting up then to prepare breakfast. A few minutes later the pistol shot rang out, while she was in the kitchen according to her testimony, and she was discovered dead. There were several people in the house at the time, but no eye witness. From the wound and the position the pistol was found the state argued that the state argued that he could not have killed himself, and that his wife was found to be the guilty party. She pleaded innocence, and the jury could not agree.

FULL TEXT (Article 3 of 4): Mrs. Frona McMahon, only 34 years old, has begun her sentence of three years for killing her husband, Dave McMahon, in Haywood county last August. She has had six matrimonial experiences, three of her husbands dying under suspicious circumstances, and three abandoned her. She remarried after each abandonment without the formality of divorce.

FULL TEXT (Article 4 of 4): Durham, N. C., March 3. – Mrs. Frona McMahon of Haywood county went once too often to the altar. As a result of the death of her sixth spouse she started a three-year term in the state penitentiary for manslaughter, pleading guilty after a jury failed to agree in a fifty-three-hour session.