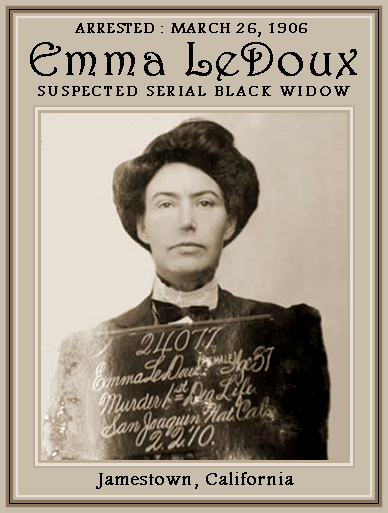 Emma LeDoux, born Emma Head in 1871, tall and beautiful, was a Vamp – a sexual predator. She married five men during her matrimonial career. Four of them died (according to one source). The first she married At the age of 16. They each met their deaths in remote places where Emma was known to nobody, then she moved on.Charles Barrett, no. 1, died in Mexico. The widow claimed he had been killed by bandits. William Williams, no. 2, according to one source, died in Arizona under mysterious circumstances leaving the widow a large sum of money.

It was in 1902 that she married no. 3, Albert N. McVicar, who, when he discovered her with another man, separated from her. She became, it was said, a prostitute. Then, without any intervening divorce porocess, came No. 4. While still legally married to McVicar, and staying with her mother in Stockton, California, Emma took on another husband on August 12, 1905, Eugene Ledoux, an elderly fellow.

On Mar. 11, 1906 she accidentally came across McVicar, not telling him about her bigamous marriage to LeDoux, and they ended up reconciling. Emma purchased some cyanide and that was the end of him. His bloodied corpse was found at a train station. The trunk was traced to Emma and she was tracked down and arrested. She never admitted guilt and was tried for bigamy and murder. She was found guilty on both counts: a prison term for the lesser count, a death sentence for the greater. She managed, nevertheless, to forestall execution and in 1909 trade a confession for commutation of sentence.

After parole in 1920 she was in and out of prison, having been caught violating parole. It was the illegal selling of the property of her late post-prison husband, no. 5, a Mr. Crackbon, whom she is believed to have murdered, that sent her back to prison for good, where she died in 1941. 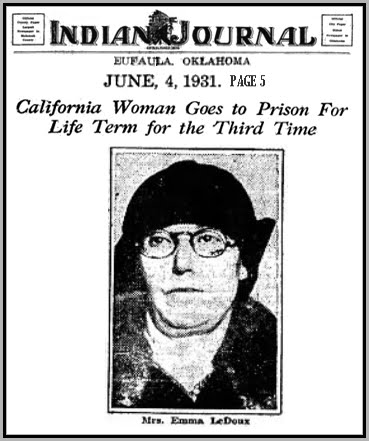 Although she now is faded and close to 60, men and romance brought about her latter-day downfall just as they did in the days when, as the “trunk murderess,” she was known all over the United States.

Emma LeDoux achieved notariety as the “Stockton trunk slayer” in 1906. She also was the first woman sentenced to hang in California. Also, she was the first woman to be paroled, break the parole agreement, and win yet another chance. Now, she faces the prison walls for the rest of her life.

Men and romance have figured in her life for 30 years. Her great regret, as she returned to prison, was the blasting of her latest romance.

“I’m afraid it ‘s all over now,” she said. “We were to he married next month. He is a Portland contractor, whom I met several months ago.

Romance blossomed early in the life of the woman, born to parents of comfortable circumstances on a California ranch. She was little more than a child when she married. She divorced this husband. Her next husband was Jim Williams. He took out heavy life insurance in his wife’s favor, and died suddenly.

Then she married Albert N. McVicar, miner, Arizona. And it was his death that has given the woman so much prison life.

The LeDoux “trunk murder” was one of the most sensational criminal cases ot 1906, attracting oatioDwide attention.

A trunk, left at the Stockton, Calif., station for shipment to San Francisco, was left behind, because it was not properly labeled. A baggageman became suspicious and called police. They found the body of a man, dead from poison.

He was identified as Albert N. McVicar, undivorced husband of Mrs. LeDoux, with whom she had been at Stockton several days. Mrs. LeDoux was traced to San Francisco, where she met a man infatuated with her, and was arrested later, hiding in a small town.

At the trial, the prosecution brought out the fact that Mrs. LeDoux left McVicar, and married Eugene LeDoux in 1906 without getting a divorce. She and LeDoux lived on her mother’s ranch.

Early in 1906, she met McVicar. The latter was working in the Mother Lode mining district. Mrs. LeDoux joined him there, apparently reconciled. They ordered furniture in Stockton to be shipped to the mining camp. The furniture shipment was ordered delayed, and soon McVicar quit his mining job to go, he told friends, to his mother-in-law’s ranch as superintendent. In Stockton, they ordered more furniture, this to be shipped to the ranch. A few days later, McVicar’s body was found in the trunk.

The prosecutor contended that Mrs. LeDoux. was fearful of having her bigamous status exposed. They coupled the furniture purchases to support their theory that she sought the furniture for herself and LeDoux, and poisoned McVicar to get him out of the way.

After conviction and sentence to hang, a new trial was granted by the Supreme Court. Just before this, she entered a plea of guilty, and won life imprisonment.

In 1920, she won parole. But freedom was short-lived. Within a year, she was in trouble again, and back in San Quentin. Five years later she again appealed for parole. She was 52, and wanted to live a life of usefulness. She was given another chance by the parole board.

Little was heard of her until her marriage to L. A. Crackbon, a California rancher. The couple lived quietly until Crackbon’s death in 1929.

Of recent months, parole officials have received disturbing reports. Court records showed her in and out on minor charges, mostly check cases.

Then came word, according to parole officers, that at 68, she still was a lure for gullible men; that through a matrimonial bureau for which she was sole correspondent, she was hearing from scores of lovelorn men with money.

She was arrested in Oakland on a minor charge, and given a suspended sentence. Parole officials began a search for her. And now the woman, who was sentenced to hang and. twice paroled from a penitentiary, faces incarceration the remainder of her life.

Emma has made three requests of the warden, now that she’s back for the rest of her days. She wants her old prison number again. She’d like to have the same cell she occupied so many years. Also, she wants to again be given work as a prison seamstress.

When arrested, Emma said, "I expected it, but I did not think I would be caught until I reached my mother's home in Jackson." 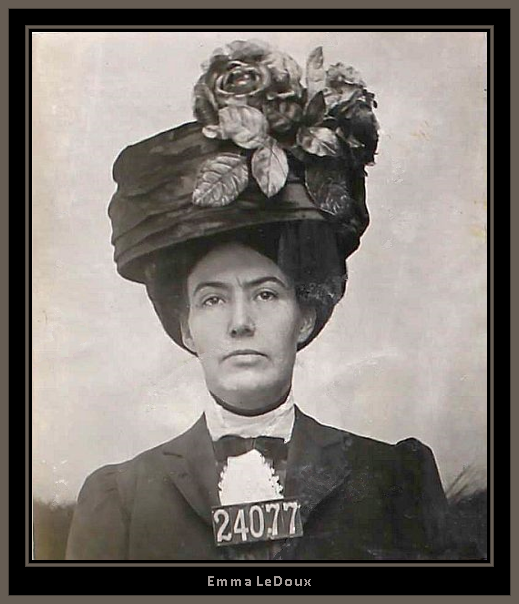 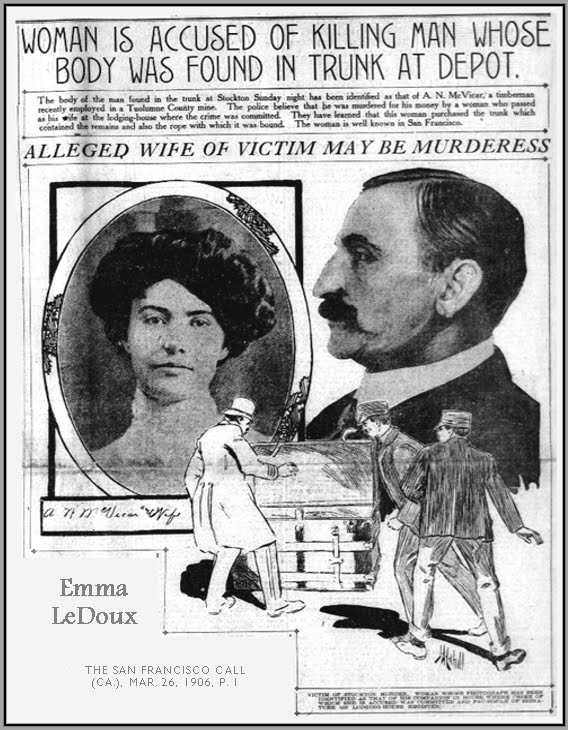 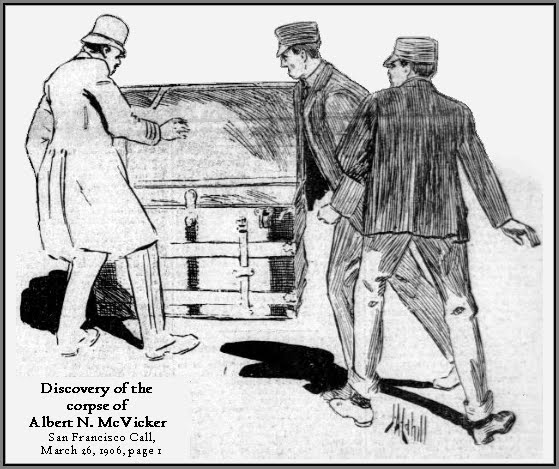 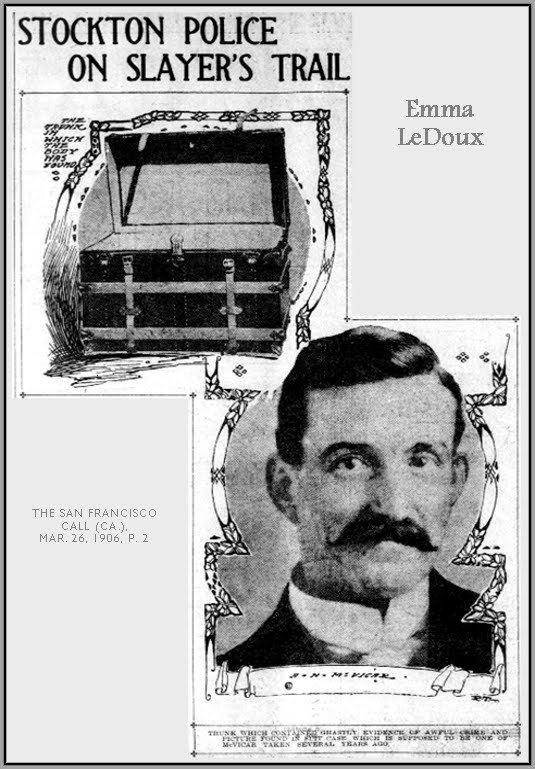 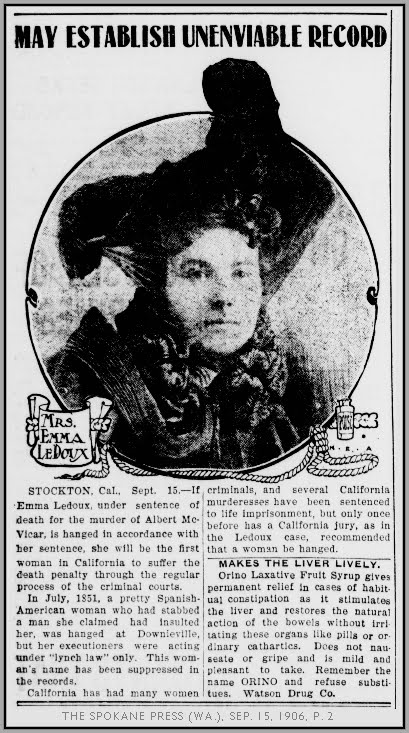 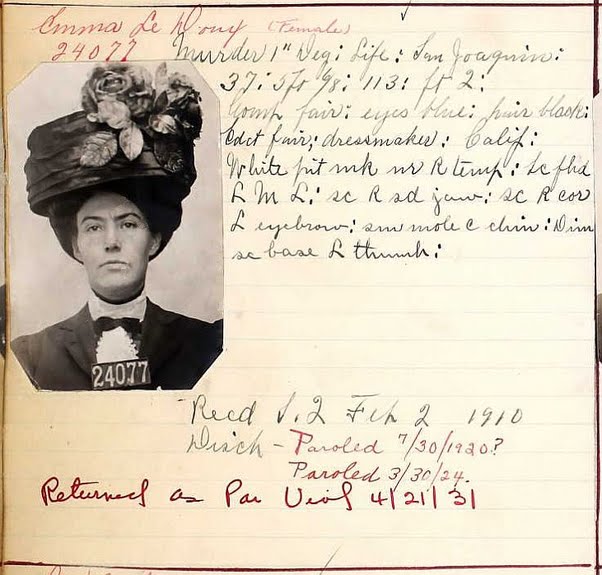 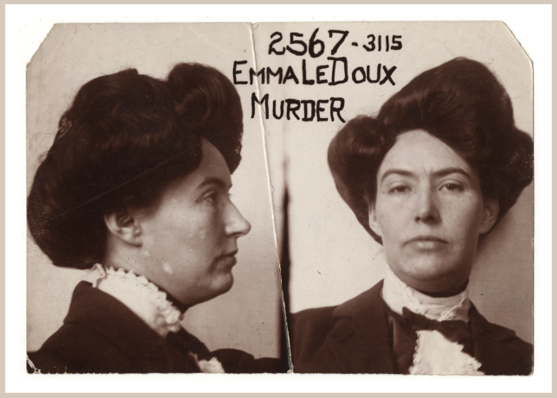 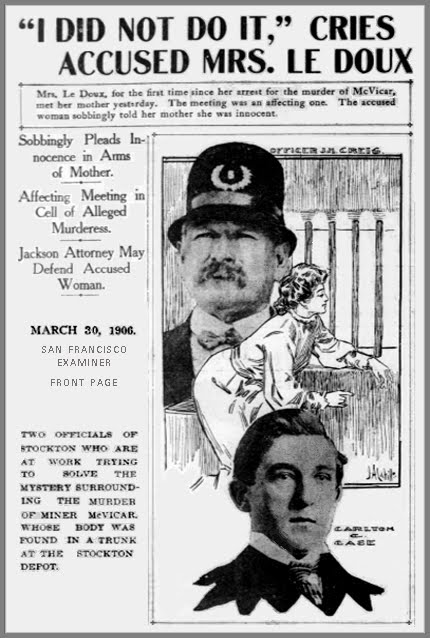 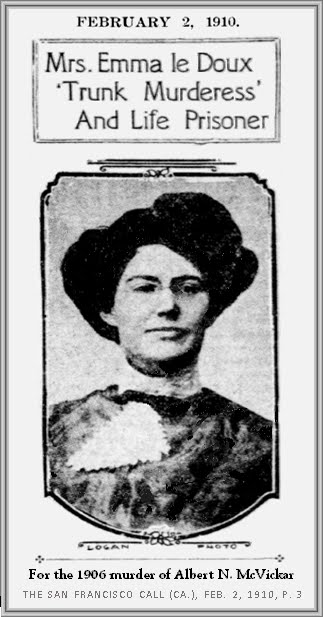 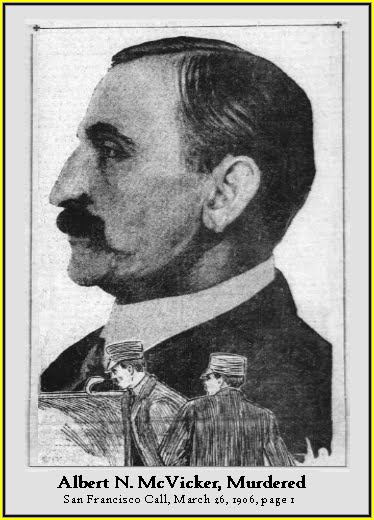 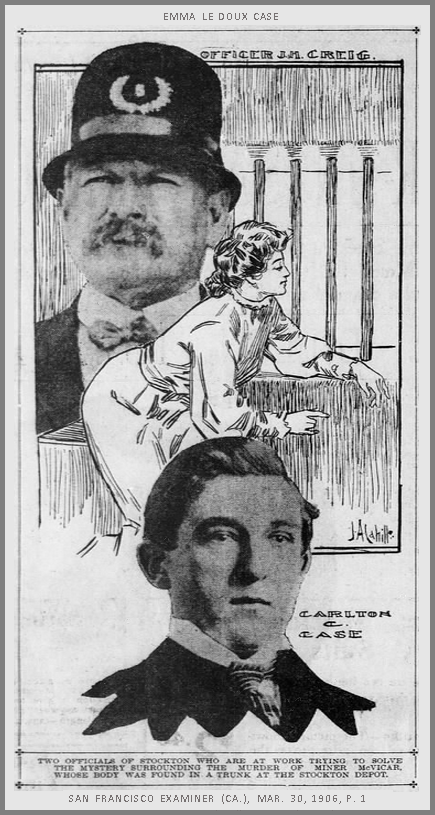 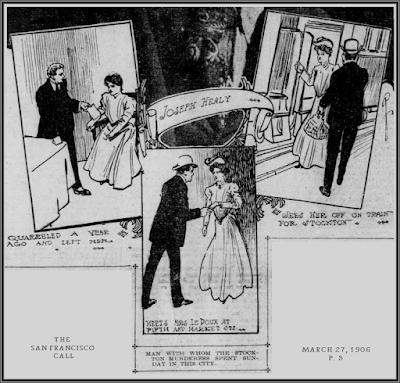