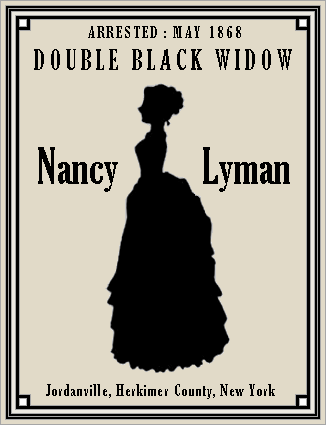 FULL TEXT: A woman named Nancy Lymans [sic] has been arrested at Jordanville, Herkimer County on the charge of having in February last murdered a former husband, Ephriam Garner. She has had three husbands. The first, named Knox, died six years since, under suspicious circumstances. In January last, she married Garner. After living with him six or seven weeks he suddenly sickened and died, under circumstances that indicated foul play. Within four weeks after the death of Garner, she married her present husband Mr. Lyman. Two or three weeks after the death of Garner, his body was exhumed, and the stomach portions of the liver were sent  to Prof. Charles Porter, of Albany. After a careful analysis, considerable quantities of arsenic were found by the Professor, upon the report of which the arrest was made. It is stated that a few days before the death of Mr. Garner the woman purchased a quantity of arsenic for the alleged purpose of killing rats. The affair causes considerable excitement at Jordanville and throughout the town of Warren.

FULL TEXT: The Grand Jury of Herkimer County, N. Y., on the 22nd inst., found a bill of indictment against Mrs. Nancy Lyman for the murder, by poison, of her late husband, Ephraim Gardner. Gardner died in March last, under suspicious circumstances. Shortly after the body was exhumed, and portions of it were sent to Albany for examination. The analysis was made by Dr. C. H. Porter, who discovered in them considerable quantities of arsenic.