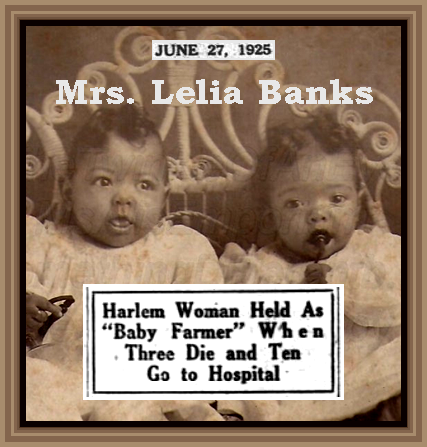 NOTE: This is the only report on this African-American case so far accessible. The story appears in an out-of town African-American paper, so we can be sure that eventually more details will become available as more papers are scanned and posted in online sources. The other Manhattan baby farmer case, Helen Geisen-Volk, was a national story for months.

FULL TEXT: On complaint of Superintendent Pisarra, of the Society for the Prevention of Cruelty to Children, Mrs. Lelia Banks, of No. 2153 Seventh Avenue, was locked up in the West One Hundred and Twenty-third street police station, charged with violating the section of the penal code relating of the boarding of children without a permit.

According to Mr. Pisarra, Mrs. Banks occupied an eight-room apartment. The children she had in charge were kept in two front rooms, he said.

NOTE: The Pittsburgh Courier was an African-American newspaper published in Pittsburgh, Pennsylvania, from 1907 until October 22, 1966.