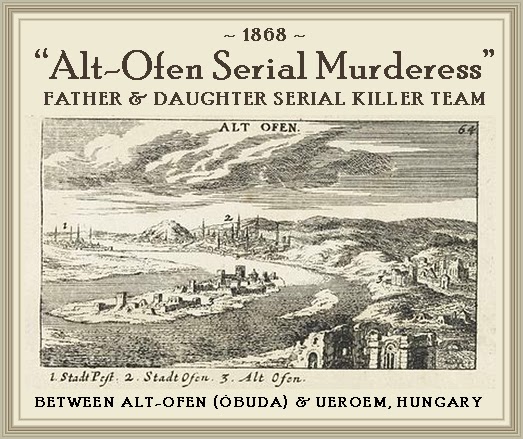 FULL TEXT: The General Correspondence of Vienna says: – “A letter from Pesth informs us that the daughter of a man employed on the roads near that city, and who resided in a cottage between Alt-Ofen and Ueriem, has just confessed, in a fit of remorse, that in concert with her father she had committed not less than sixteen murders during the last ten years, for the purpose of robbing their victims. Seven skeletons have already been discovered by the authorities, and information given by the young woman has led to the finding of the nine others.”

Wikipedia: Óbuda was a city in Hungary that was merged with Buda and Pest on 1 January 1873; it now forms part of District III-Óbuda-Békásmegyer of Budapest. The name means Old Buda in Hungarian (in German, Alt-Ofen). The name in Croatian and Serbian for this city is Stari Budim, but the local Croat minority calls it Obuda (the name "Budim" they use for the fortress in Buda).