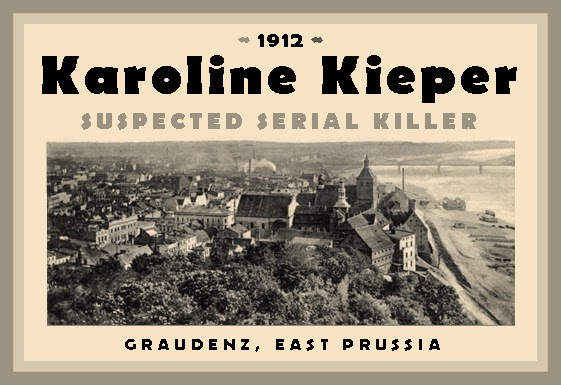 FULL TEXT (Article 1 of 2): Frau Karoline Kieper, a widow, 50 years of age, was placed on trial at Graudenz (Germany) on a charge of poisoning her 73-year-old mother, her 80-year-old father, and her husband. The indictment also suggests that she poisoned her first husband in 1889, but as more than 20 years have elapsed she cannot be prosecuted on that charge.

FULL TEXT (Article 2 of 2): The German public (says the Berlin correspondent of the London “Daily Telegraph”) are following with intense interest the trial of Karoline Kieper, a woman, aged 50, at Grauden [sic], in East Prussia, on the accusation of having poisoned no fewer than four persons. According to the Crown prosecutor, she is a veritable Borgia. Her third husband died from a mysterious disease, and an examination revealed the presence of arsenic in the body. It was then remembered that Kieper’s parents and her first husband had also died suddenly, and the bodies were exhumed, when traces of arsenic were again found.

The woman declares that her first husband poisoned himself to escape from the suffering consequent on a painful disease, and that her third husband poisoned her parents and then himself in despair. The second husband, who is still living, apparently escaped in untimely death by divorcing the woman. She stated that she had never been in a police court before, except when fined £5 for beating her last husband. The prisoner appeared in widow’s weeds. 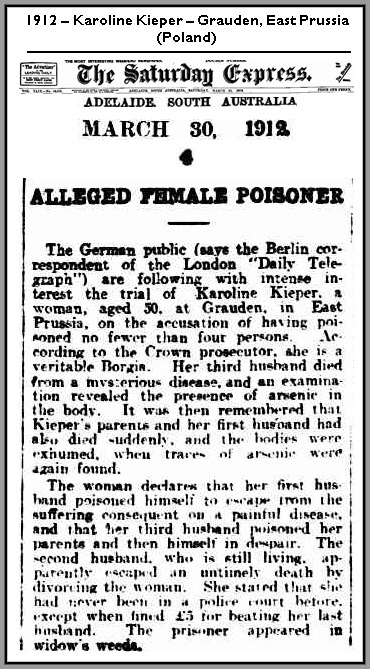