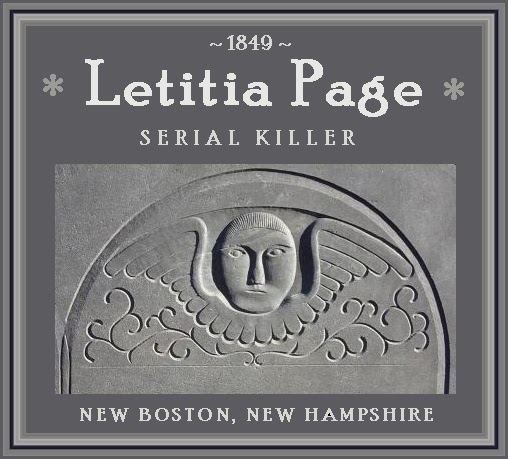 EXCERPT (Article 1 of 3): Benjamin F. Blaisdell moved from the easterly part of Goffstown to New Boston Village, purchasing the farm now owned by Charles Shedd, and engaged in mercantile pursuits. His family consisted of himself, wife, and four children, also his mother, Mrs. Sally Foster Blaisdell, widow of the late Henry Blaisdell.

On the 13th of January, 1849, Letitia S. Blaisdell, an adopted daughter of the late Henry and Sally Foster Blaisdell, came to New Boston to visit in the family. At her own request, the night after her arrival, she slept with her adopted mother. The next morning the old lady was taken sick, soon became insensible, lingered through the day and the next night, and died on the morning of the 15th. New Boston history has the following in regard to the affair:

“After the death of Mrs. Blaisdell, Letitia went to Wentworth, spent four weeks and returned February 16. The next day after her return, Benjamin E., a boy two years and a half old, was taken sick and after twelve hours of suffering died, the physicians affirming that the child must have been poisoned.

"Soon after the burial of the child Mr. Blaisdell and his wife were taken sick with every symptom of poison, but by timely aid were relieved. Suspicions now began to rest on Letitia, and she soon confessed; admitted that she had administered morphine to the aged mother and the child, and put the same in the tea which Mr. and Mrs. Blaisdell drank, and that she had provided herself with strychnine if the morphine failed. She held a forged note against Mr. Blaisdell and intended to destroy the whole family. This was undertaken from no ill will towards any member of the family, but evidently with the impression she could gain possession of the property. To this crime she affirmed she had been impelled by the assistance of another person."

She was arrested and indicted for murder, and Franklin Pierce, afterwards President of the United States, and David Steele were assigned as counsel.

April 24,1849, was the day set for the trial. The house was filled with interested spectators; the indictment was read, and in an audible voice she pleaded guilty, and she was sentenced to be hung on the 30th of August, 1849, but this sentence was commuted to imprisonment for life, and in 1861 she was pardoned by Governor.

Goodwin, and subsequently married a man who had likewise served in the same prison. The person whom she charged with impelling her in this nefarious crime was never afterwards held in very high esteem by the people of Goffstown.

Soon after this Mr. Blaisdell returned to Goffstown, purchasing what was known as the Dr. Gove place in Goffstown Village, where Dr. Charles F. George resided at the time of his decease. Here he continued to reside during the remainder of his life, engaged in trade and manufacturing.

FULL TEXT (Article 2 of 3): One of the most unaccountable attempts we ever heard to destroy a whole family, occurred a few weeks since in New Boston.

Some five or six weeks ago Mrs. B. F. Blaisdell’s mother, an aged widow, residing with him, was taken suddenly ill, and, after remaining in an unconscious state about twenty-four hours, died. No suspicions were excited by this death. On the 18th of February, Mr. Blaisdell’s son, a child about two years old, was taken sick in the same way, and died in about twelve hours later. A physician was called, who declared that the child must have been poisoned. No one was then suspected of administering the poison, neither could any traces of it be found in the house. The evening of the day on which the child was buried Mr. and Mrs. Blaidell sat down to the tea, but soon desisted from drinking it on account of its unusual and disagreeable flavor. They were immediately taken unwell. A physician was called who pronounced them poisoned. They were very sick during the night, but their lives were saved with great difficulty.

A few days since the whole mystery of the affair came out as follows: A girl by the name of Letitia Page, from 23 to 25 years of age, had been living in the family from early childhood as the adopted daughter of the old lady, Mrs. Blaisdell. For the last six years she has worked in the Cotton Mills at Manchester and Nashua. – Some weeks since she came up from Nashua to spend a short time in Mr. Blaisdell’s family, and to make preparation for marriage. Soon after Mr. B. and his wife were taken sick she left to visit a family in Goffstown, who were living on a farm formerly owned and occupied by Mrs. Blaisdell. At this time Mr. B. had some suspicions of her. He went to see her on the subject, but she persisted that she was innocent. But a few days since she returned to Mr. B.’s in New Boston, and confessed to him and his wife that she was guilty of poisoning them all with morphine, which she purchased at Manchester for that purpose at the suggestion of a certain woman in Goffstown. She further confessed that a forged note of hand for $400.00 against Mr. B. running to her was put into her hand, and she was told that she could collect it, especially if Mr. B. and his family were out of the way. The note she destroyed before she made the confession, but she had shown it to two individuals. When asked why she should attempt so horrible a crime, she could give no reason, nor assign any motive. She said she had not the least ill will against the family. She had always called the old lady mother, by whom she had been reared up, with much maternal kindness and care, and to whom she had always been dutiful and affectionate.

FULL TEXT (Article 3 of 3): N. H. March 10, 1849. – The girl who confessed having given a fatal dose of morphine to the mother and child of B. F. Blaisdell, Esq., of New Boston, N. H , a short time since, and also one which nearly proved fatal to himself and wife, was yesterday, (Friday) committed to the county prison without the form of a trial, to await the April session of the Court of Common Pleas.

Two or three others are implicated in the affair, one of whom was arrested last evening, a Mr. Cheeney of Goffstown.

It seems the girl had in her possession several foreign notes against Mr. B., which she expected to collect at his decease. Mr. C. is in some way connected with these notes, and with having advised the act of poisoning.

A respectable gentleman saw taken from the girl’s trunk two notes against Mr. B. besides several parcels of poison one marked “rat poison,” another was a blue crystallized substance, resembling blue vitriol; the third a white powder, supposed to be sulphate of morphine.

Considerable sympathy is felt for this young girl, who, up to the time of having left Mr. B.’s family, had always sustained a reputable character.

Two or three years ago, she left to seek employment in Manchester or Nashua, obtaining which, (as report has it,) instead of seeking for her companions the good and virtuous, she became the associate of the vile and licentious, and passed rapidly down the successive steps of crime, until now the State’s prison or gallows awaits her. Hon. David Steele, Counsel for State; Franklin Pierce, for the defence.

P. S. – There are many other things connected with this singular and painful tragedy in which I do not think it prudent to give publicity at present.