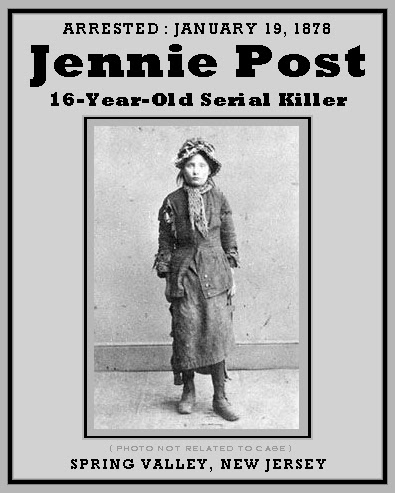 NOTE: Although her third victim seems to have – barely – survived, Jennie Post was clearly inclined to continue murdering all who crossed her, thus she most certainly was a serial killer who merely got stopped early in the trajectory of a career that might well have taken many lives.

FULL TEXT (Article 1 of 2): New York World, 17th: Jennie Post, the little girl who upon several occasions has put arsenic in the food of people whom she didn’t like, and who, as related in yesterday’s World, was arrested and brought before Justice Farrington, at Spring Valley, Saturday, for poisoning General von Weicht and his wife, her master and mistress, will be brought back from New City, where she has been in the county jail meantime, to Spring Valley to-day, for her final examination, when it will be determined whether she is to be proceeded against in lunacy, or whether her case is to go before the grand jury in regular manner. Jennie tells the story of her poisoning, and indeed of her whole life, with the utmost readiness, and from appearances, an idiot with shrewdness enough to know whom she dislikes and how to injure them, but without the sense to conceal her actions and utterly without moral sense. She is now between thirteen and sixteen years old, with brown hair and eyes and a childish body, rather common-looking and unnoticeable. She says that she and her mother went to the poor house in Paterson when she was two years old, and that, her mother dying, she remained in the poorhouse till she was taken away by a lady of Rockland county, about four years ago. It was in the poorhouse, Jennie says, that she learned how to mix poison, from observing the matron prepare arsenic for mice, she was greatly interested in the whole operation, and when she saw what quick and extreme effect the arsenic had upon the mice, she studied its preparation with the utmost eagerness, and even stole a little upon one occasion, and hid it carefully away for future private use.

It was a peculiarity of Jennie’s that if anybody refused her anything she had set her heart upon, no matter how trifling, she would straightway vow his destruction, generally expressing herself in the terms “You just wait; I’ll fix you.” Mr. Peter De Baum, with whom she first lived after coming from the poorhouse, was an old man and his astonishment was very great when upon one occasion Jennie began to address him in the most indecent and ribald manner. He corrected her with a good deal of severity, when she vowed, in her usual manner, to “fix” him; and she did it immediately by putting arsenic in his soup. Mr. Le Baum died very suddenly and unexpectedly of pneumonia, and no poisoning was suspected at the time, though its occurrence now seems probable, since Jennie herself says she did it. General von Weicht and his wife, with whom Jennie came to live about thirteen months ago, are wealthy Germans, General von Weicht was in the Prussian army, and some two years ago bought an extensive farm and a capacious house in the neighborhood of Spring Valley, where he lives with his wife in good style and surrounded by a great many comforts.

Mrs. von Weicht, having a weakness for poor children, one unlucky day came across Jennie, who had passed through several hands since the death of Mr. DeBaum, and, finding her poor and shabby enough, took her home. She still preserves the dress in which the girl appeared, consisting of an alpaca skirt, torn lengthwise and across beyond what one would think possible; a calico waist that looks no way in particular except scrimped and dirty, and a straw hat, with dirty, very dirty, ribbons, which looked as if Jennie had used it habitually to sit down upon. Mrs. Von Weicht soon discovered that her new charge was addicted to some startling vices, but she did not desert her on that account; on the contrary, she was only the more earnest in her care of Jennie, hoping for and contemplating her reform in good season. The girl was supplied in neat, fresh dresses in plenty, a warm, handsome sack for the cold weather, a whole heap of white linen underclothing, and all such matters, so that she was perfectly comfortable and respectable anyway, and a perfect princess in comparison to what she had been. Mrs. Von Weicht set herself to the task, also, of teaching the young person and spent time with her every day, and bought her religious books; but this part of the lady’s work had absolutely no effect on the girl.

She remained vicious, and time and again shocked the family almost beyond bearance. She had a violent temper, and, taking some pique at the German cook, cut her feather bed all to ribbons one day with a pair of scissors. Again, she slit up a pair of new trousers belonging to Mr. Von Weicht; and she threatened to poison a young lad of fourteen in the neighborhood by sending him arsenicated frosted cake, because he refused to be her lover. One evening, not long ago, Mrs. Von Weicht went up stairs to go to her room, but seeing Jennie inside, standing quite still, at the foot of the bed, and seemingly doing nothing, she stopped in the hall, where it was dark, to watch the girl for a moment. Jennie was talking to herself, and what was Mrs. Von Weicht’s horror to overhear her speak as follows: He wouldn’t do what I wanted and I put poison in his soup.

Then I put poison in her soup so as to get all her dresses and jewels. If that doctor interferes any more I’ll poison him, too. Then I’ll poison the cook, and then I’ll go off with my fellow and have a good time. It was after both General and Mrs. Von Weicht had been taken sick, and before they knew what the matter was, that the lady overheard this soliloquy from Jennie. Then she was charged with putting poison in the food, and admitted it at once. She said that she had intended to poison General Von Weicht because he had refused what she had asked of him, and because he had rebuked her, and that she had poisoned Mrs. von Weicht in the hope of inheriting her dresses and jewelry. Jennie used no less than three kinds of poison upon Mrs. Von Weicht arsenic, nitric acid, and muriatic acid, the lady is lying in a precarious condition. Her stomach, of course, is dreadfully inflamed by the poisons which she has taken into it, and she cannot bear any, even the simplest, food upon it. The milk in which the girl mixed her doses will probably prove her salvation, if she lives. Dr. Wigton, who attends her, says that at present there are reasonable hopes of her recovery.

[“Jennie Post. - The New York Pauper Girl, who Seeks to Avenge her Slightest Grievances by “Fixin” her Victims with Poison Potions. - She Attempts to Possess Herself of Fine Dresses and Jewels by Poisoning her Mistress A Strange Story.” The Memphis Daily Appeal (Tn.), Jan. 20, 1878, p. 1] 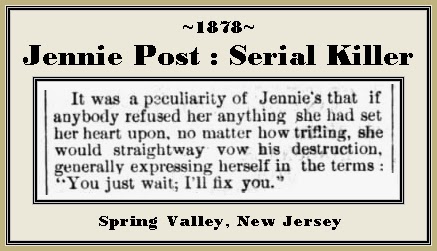 FULL TEXT (Article 2 of 2): The little pauper poisoner, Jennie Post, who, at Spring Valley and elsewhere, put arsenic in the food of people whom she disliked, or whose jewelry and silk dresses she coveted, has been committed by Judge Suffern to the House of Industry in New York. The girl was weak-minded and without moral sense. She was found by a lady about four years ago in the Patterson Poor-house, where she had been brought by her mother, who was an habitual drunkard, and where she learned how mix poison from seeing the matron prepare arsenic for mice. Jennie’s case is clearly one of hereditary depravity beyond the reach of educational cure. The only sure remedy for eradicating it is the Malthusian one of absolutely preventing it transmission to unborn generations. In the poor houses of this country, as in those of England, this heroic remedy must be supplied. Besides, no natural born prisoner can be left safely at large, any more than a mad dog, or a mad cat. That species ought not to be propagated.