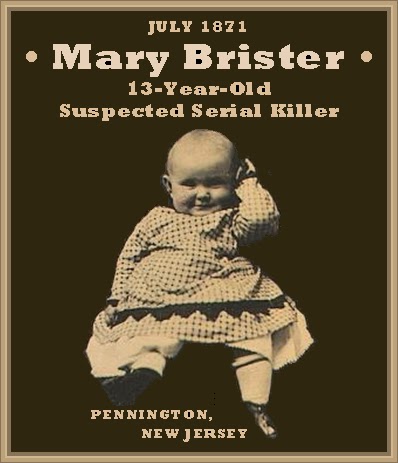 FULL TEXT: Mary Brister, a girl, 13 years of age, and daughter of Mrs. Weisner, of Pennington, N. J., by a former husband, is accused of causing the death of three children. The children had been left in her charge while her mother and stepfather were away at their daily labor. Two of them died about two years ago, very suddenly, and under suspicious circumstances. A third died a few days ago. The girl said it had fallen from the table to the floor, and when she found it, it was dead. A physician was called, who gave it as his opinion that the child had been strangled. The circumstances connected with the death of the last child naturally caused suspicions relative to the death of the others. The authorities of the township with the friends of the girl have tried to extract a confession from her; but she adheres to her story that the child died from injuries received from by falling from the table, and that the others died by accident.

***
FULL TEXT: Mary Brister is the name of a thirteen year old girl in Pennington, N. J., who is arrested on a charge of murdering four infants who, during the last two years, have been in her charge.

FULL TEXT: Pennington, N. J., April 25. – Much excitement prevails over here over the case of a young colored woman named Mary Brister, who is accused of murdering several children. The accused is a daughter of Mrs. Wesley Weisner, by a former husband. Mrs. Weisner’s children had been placed in her charge while the parents were employed at daily labor. All have died over two years ago, very suddenly. A few days ago the fourth child died, and a physician gave it as his opinion that the child had been strangled. Circumstances connected with the death caused a suspicion as to the death of the others to be thrown on the girl. All means to extract a confession from her have failed so far. 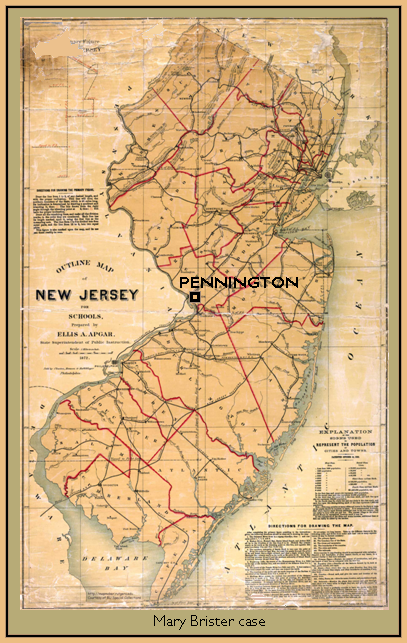 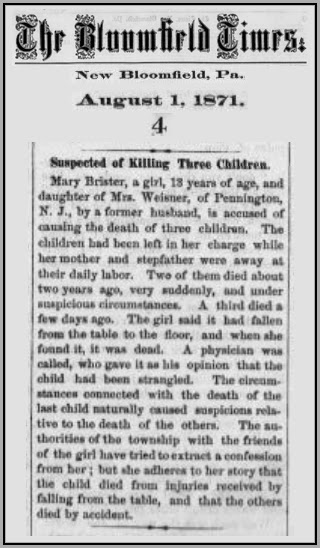 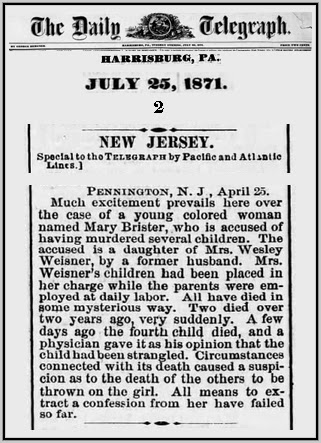