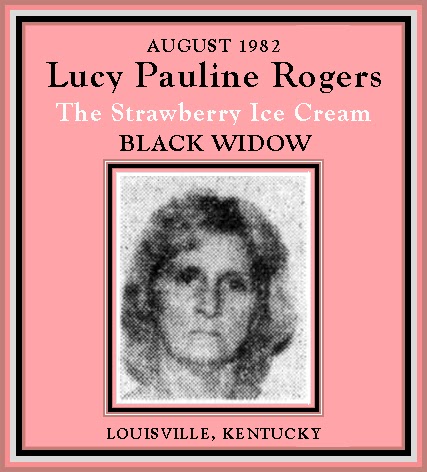 Note: Some early reports on the case erroneously give the name of the murder victim Morris Lee Amos as “Adams.”

FULL TEXT (Article of 2): Louisville, Ky. (AP) - The late husband of a woman charged with trying to kill her current husband died of arsenic poisoning and not of a heart attack as originally believed, the Jefferson County coroner says.

Morris Lee Amos, who was 46 when he died in 1977, "was killed by chronic and acute arsenic poisoning," Coroner Richard Greathouse said Friday. Tests revealed that parts of Amos’ body contained as as much as 540 times the safe level of arsenic, he said.

Lucy Pauline Rogers, who was married to Amos when he died, has been charged with poisoning her current husband, Luther Elmo Rogers, with arsenic-laced ice cream last month. Rogers 40, who had been working for the Ford Motor Co., is recovering at a Louisville hospital.

Police said that after Mrs. Rogers was arrested and released on $2,500 bond, she tried to poison herself with arsenic. She was reported in good condition at a Louisville hospital, police said.

Amos’ body was exhumed June 3. Tests at the state toxicology laboratory in Frankfort showed that the arsenic level in Amos’ fingernails and toenails was 27,000 micrograms per 100 grams of tissue, or as much as 540 times the safe level, Greathouse said. 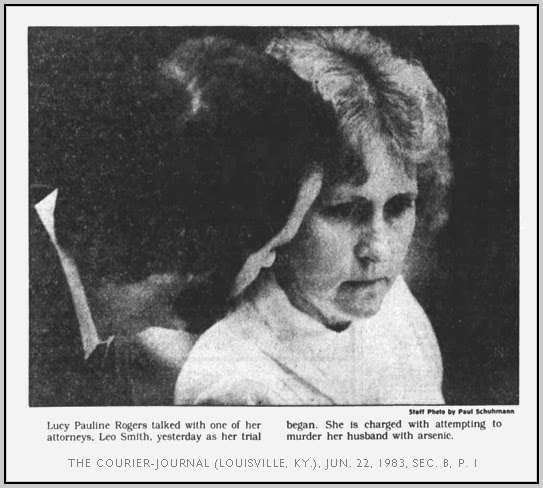 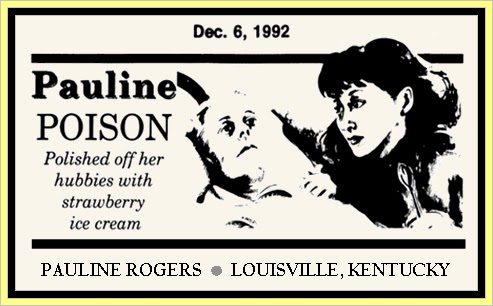 FULL TEXT (Article 2 of 2): Morris Amos was a big healthy specimen, never sick a day in his life, until he took the miseries in the winter of 1977.

Morris would bend over and complain that his bouts of cramp would be the end of him. On a good day, Morris could give Nostradamus a run for his money. He was dead on in regard to his future.

Morris’ wife Pauline was a rock. Folks from Kentucky are like that.

Whenever Morris complained, there was his Pauline with an encouraging word. When he began to lose serious weight, about 30 pounds in a few weeks, ever loyal, ever faithful Pauline was there at his side with piping hot chicken soup.

It shouldn’t have hurt, but it did. Morris complained of a burning thirst that wouldn’t go away. Pauline brought him quarts of strawberry ice cream.

Louisville neighbors were amazed at Morris’ rapid deterioration. He went from a good old boy with a substantial layer of suet cascading over his belt to a gaunt, feeble man, all in a few months.

Diarrhea on a daily basis will do that to a fellow.

Pauline insisted that Morris see a physician. The doctor took one look at him and agreed that something was drastically wrong with his 46-year-old patient. He prescribed vitamins and a high protein diet.

I would like to report that Morris’ condition improved, but such was not the case. His condition worsened to such an extent that he had difficulty walking. The tips of his fingers turned blue and his face took on a gray pasty look.

On a second visit to the doctor it was suggested that Morris reduce his work load, which was kind of redundant, since Morris was now too weak to do much more than breathe.

A week after the doctor’s latest advice, Morris was admitted to Suburban Hospital, where his illness was considered somewhat of a mystery.

Physicians there couldn’t figure out what was causing Morris to waste away to nothing. There were various suggestions, from muscular dystrophy to a virus, but all these conditions were ruled out.

Doctors believed that death had been caused by a heart attack, but weren’t positive. They approached Pauline, suggesting a post mortem which would clear up any doubts and reveal the cause of her husband’s rapid deterioration. Pauline wouldn’t hear of it.

She told the doctors: “My Morris would never approve of such a thing.”

The death certificate was duly signed. Morris was laid to rest, accompanied by the usual formalities.

Pauline wept into a dainty handkerchief while her husband was lowered into his final resting place. Pauline received the proceeds of a modest life insurance policy as well as social security checks.

Five years after Morris’ death was little more than a dim memory, Luther Rogers, an assembly worker down at the Ford plant in Louisville, was admitted to hospital.

He complained of severe diarrhea and a burning thirst. Doctors tried everything, but Luther went rapidly downhill. After several days in hospital, his health showed a marked improvement. In fact, Luther was so strong he was released into the loving arms of his wife.

Two months later, Luther, like a bad penny, showed up at the hospital again.

He could hardly walk. Tests indicated a drastic decrease of white blood cells, but medics were stumped as to the cause. They met and discussed every possibility.

Someone asked if Luther had ever been tested for poison. It was a long shot, but the doctors decided to conduct several tests. In the meantime, Luther’s intake was being carefully monitored.

Luther’s wife visited as usual. She asked her husband’s nurse if she could feed him some ice cream. After all, he complained constantly of his extreme thirst. The nurse could see no harm in ice cream.

Luther looked up gratefully as his wife spoon fed him heaping tablespoons of the cooling delicacy.

It was strawberry, his favorite flavor.

When Luther polished off the ice cream, his wife tossed the empty container into the waste basket. After she left the hospital, Luther’s lab tests were completed and given to his attending physicians.

Normal urine tests contain 200 milligrams of arsenic. Our boy had 20,000 milligrams. Someone was poisoning Luther. Doctors called in the police. Detectives inquired about Luther’s intake of food. They were assured that his entire diet was supervised and carefully monitored.

Nevertheless, the nosey detectives wanted to question Luther’s nurses. The nurses told the detectives that no one, absolutely no one, had fed Luther anything other than his prescribed nourishment, much of which was given him intravenously.

Of course, his wife was an exception.

She had fed him strawberry ice cream. As a matter of fact, she had been there earlier in the day and had tossed the empty ice cream container into the waste basket.

The container was retrieved.

Large traces of arsenic were found.

Luther’s home was searched for arsenic but none was uncovered. Finally, his wife Pauline’s background was investigated.

Quicker than you could consume a mint julep, it was learned that Pauline Rogers’ previous husband, Morris Amos, had died five years before under exactly the same circumstances which surrounded Luther’s illness. Both had been healthy, robust men who had wasted away in a matter of weeks for no apparent reason.

In each case, Pauline had fed them strawberry ice cream. It was all much too much.

County coroner Richard Greathouse was made aware of the facts of Morns’ death. Since arsenic remains in the hair and fingernails of deceased persons, he authorized the exhumation of Morris Amos’ body. In June, 1982, the body was transferred to University Hospital. A day later the result were delivered to the coroner’s office.

Morris had not died of a heart attack.

Arsenic had been found in the body, 460 milligrams in hair, 470 in the stomach and 18,000 milligrams in the liver. From the hair it was ascertained that Morris had been systematically poisoned for over a year. Pauline Rogers was taken into custody and charged with the murder of Morris Amos.

That same evening, she was hospitalized with severe stomach cramps. Pauline had poisoned herself.

He recovered, but the incident revealed that she was an avid gardener and had access to arsenic laced pesticides.

In August, 1982, Pauline Rogers was indicted on charges of murdering her previous husband, Morris Amos, and the attempted murder of her current husband, Luther Rogers.

Pauline was found guilty on both charges, although she never revealed the motive for her actions. She was sentenced lo 20 years imprisonment for murder and received the maximum sentence of 20 years for attempted murder.

The sentences were to run consecutively.

Today, Pauline resides in the Kentucky Correctional Institution for Women. Officials there tell me she is a model prisoner and gets along well with staff and fellow inmates. She will be eligible for parole in the year 2000 at the age of 64. 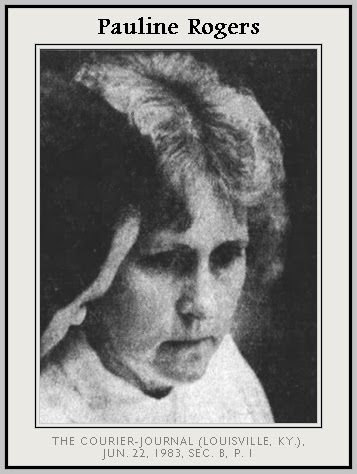 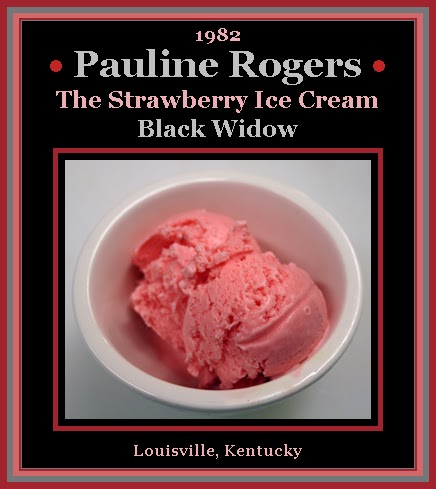 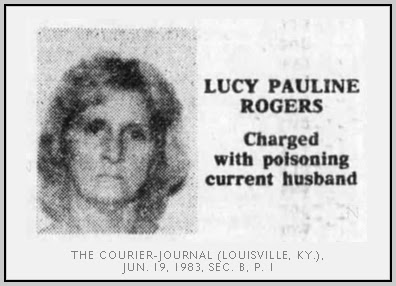