The Treatment of Domestic Violence in Delaware - 1886 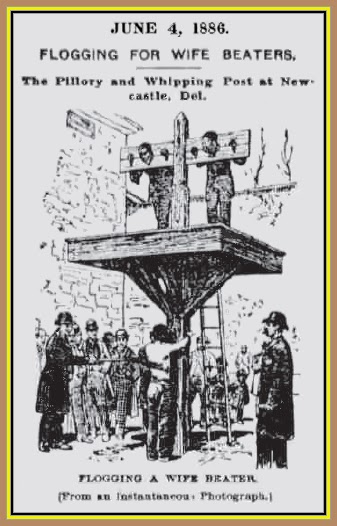 FULL TEXT: Delaware still retains the whipping post and pillory. It is a source of great curiosity to strangers, who, it is said, usually purchase the tails after it has been used on a culprit as a souvenir of their visit. The pillory is used for the perpetrators of petty offenses, and is on exceedingly humiliating punishment to those submitted to it. For some crimes it is said to have a wholesome effect on the offenders by advertising their faces so they become afraid to attempt the perpetration of similar offenses again.

The whipping post is used for wife beaters probably on the principle that “like cures
like.” Of course there is a strong diversity of opinion even in Delaware as to the value of retaining this old relic of English criminal law. The following letter from Frederick Douglass in answer to an inquiry put to him regarding the advisability of flogging wife beaters, will be of interest in this connection:

DEAR SIR:: If for any offense in the world a human being should be stripped to the waist and lashed till his warm red blood should stain the earth beneath, it is the offense of subjecting his wife and the mother of his children to that torture; but I am not sure of the wisdom of this sort of retaliation. In resorting to flogging something more must be thought of than the just punishment of the offender. We must consider the effect upon the man thus punished and the man who is required to administer the punishment, and if we succeed in whipping the brute out of the one and at the same time only whip the brute Into the other, little has been gained to humanity and decency by the operation. I know of few things better calculated to blunt and destroy all human sensibilities than tearing the living flesh of a man with a blood-clotted cowskin. The man who does it is unfitted for all moral and human influence, and diffuses brutality in every breath. Sad, indeed, it is for the world if only by flogging can men be made to refrain from beating their wives.

Coming from a condition of slavery as I have, where everything was done by the whip, I have perhaps a greater horror of flogging than I might otherwise have. Be this as it may, I would try many other experiments before I would resort to the whipping post as a remedy for wife beating. I write in haste, but I have said enough to indicate my views on the point upon which you have done me the honor to ask my opinion. 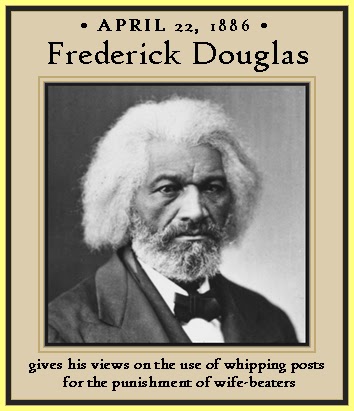