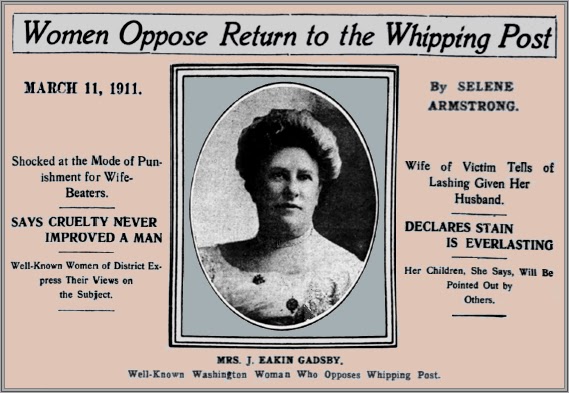 And Mrs. J. Eakin Gadsby, well known club woman, and District president of the Woman’s National Rivers and Harbors Congress, paused for breath before she recovered sufficiently from the shock to say what she thinks of Baltimore’s revival of the whipping post as a mode of punishment for wife beaters.

“Why, it’s simply barbarous, that’s what it is,” she announced. “Never having been beaten, I cannot appreciate the emotions of a woman whose husband uses this method of coercion. But a whipping post? It belongs to the dark ages I wish I could speak as strongly as I feel. The thought of cruelty to the flesh of any human being as a mode of improving his morals is so mediaeval, so altogether revolting, that one can only wonder what has driven an enlightened city like Baltimore back to three hundred years or more In its methods of dealing with wife beaters.

“Fine the man who beats his wife, or lock him up. But don’t degrade him and the community, by putting him in the whipping post, and beating him for the amusement of the public.”

“Is there any possibility that the whipping post may be established in Washington?” chorused the several women active in social work, who were today asked for an opinion concerning the return to the whipping post as a mode of punishment for wife beating made by the Baltimore city jail recently.

“Because if such a movement should gain any around here.” Some of the most emphatic speakers declared, “you may be sure it would meet with organized opposition from the women of Washington.”

Miss Harriet J. Hifton, president of the District Federation of Women’s Clubs, and one of the best Informed women in the Capital on sociological conditions in this and other countries, declared that there is but one way, both intelligent and humane, of dealing with
the wife beater.

“Let him be imprisoned,” she advocated: “put at steady labor, and the wages he earns turned over to his wife.” The wife beater, it is safe to assume, is also the non-supporter. Some jails are already settling the problem by seeing that he supports his wife during his term of confinement for beating her. But the whipping post? Why, that has been ruled out too long ago to talk about. So has physical punishment of any sort. Are children any longer beaten at school? Can any adult be by a spanking? Well, hardly.”

~ Views of Advocate Of Harem Skirt. ~

Mrs. A. L. Barber, who recently advocated the adoption of the harem skirt as the regulation dress of the suffragette, is also advanced in her ideas as to punishment of the wife beater.

“Advocates of the whipping post argue that wife beating is, in itself, a mediaeval pastime,” said Mrs. Barber. “Don’t they know that it is mediaeval to beat anything? Beating never reformed a man, a woman, or a dog. There is no law which has the right to lay the lash upon a sentient being.

“As to the wife beater, I should say, give him solitary confinement. Meditation is what he needs. He would find that affection for his wife increases marvelously during the period of his incarceration.”

“A retrograde movement,” is how Mrs. Mary Howe Totten, one of the leaders in the Anti-Vivisection Society of Washington, characterizes the revival of corporal punishment for wife beating. “If the man who beats his wife can imprisoned and set at hard labor, the profits of which shall go to his family, he will have learned his lesson than he could possibly learn it from the lashes given at a whipping post.”

Into the question of punishment of an individual, these women contend, there must enter the consideration of the himself, his family, and the community in which he lives.

As to the fact that a public beating lowers and degrades even the most degraded, they aver, there can be no doubt. They also believe that it stigmatizes a man’s wife and children, and that the spectacle of a man’s being publicly whipped has a tendency to brutalize the rest of the community.

“To punish even such a low offense as wife beating by physical means will be regarded as a step backward by every woman, I feel sure,” is the opinion of Miss Elizabeth Brown, of the Associated Charities. Washington women, however, were emphatic today in making it plain that they do not wish to deprecate the odium which should be attached to the gentle art of wife beating.

“It deserves the worst,” they “but to punish it by a method which is retaliative instead of reformative is to commit a crime against every social reform which has been accomplished in the past century.”

From a woman in Baltimore, who has had actual experience as the wife of a cruel husband, there comes a protest against the whipping post which is full of pathos and interest. Her husband, Frank McCauley, is the first man in Baltimore to be punished at the post. His wife, who lives at 509 South Fremont avenue, says in regard to the punishment meted out to her husband:

“We have one child, a ten-year-old daughter, and even as the ‘sins of the parent shall fall upon the child,’ so shall the stain of my husband’s lashing follow her all the days of her life, no matter how long she shall live.”

“Yes, I suffered untold physical agonies at the hands of my infuriated husband, but the aching of my heart when I knew the lash was being applied to his back was much more severe.”

“I would rather he would have been sentenced to six months – yes, six years in city jail than to have him receive one stroke of the cat-o’-nine-tails by a public official. Our little girl, and I feel more sorry for her than I do for myself or Frank, is the one who will have to suffer the most. Why, she cannot go out of the house until children point her out as the daughter of the man who was given a whipping at the jail whipping post.

“I do not know how Frank will feel about it when he comes out of jail, but I do believe this: That his conduct toward me might have been changed for the better by a jail sentence or a sentence to hard labor for a period of time, whereas now I think it will change for the worse.

“I am a member of a church. Our daughter attends Sunday school. I have been reared to follow the straight path, and am trying to train my daughter in the same way. But, let me tell you. It is mighty hard for us to go to church when we hear remarks about our relations to the wife-beater who was lashed at the jail.

“There may be homes which will be benefited by a husband and father who beats his wife receiving whippings at the whipping post, but as for my home, I cannot see any benefit.”

[Selene Armstrong, “Women Oppose Return to the Whipping Post -  Shocked at the Mode of Punishment for Wife-Beaters. - Says Cruelty Never Improved A Man - Well-Known Women of District Express Their Views on the Subject. - Wife of Victim Tells Lashing Given Her of Husband. - Declares Stain Is Everlasting - Her Children, She Says, “Will Be Pointed Out by Others.” The Washington Times (D.C.), Mar. 11, 1911, p. 6]