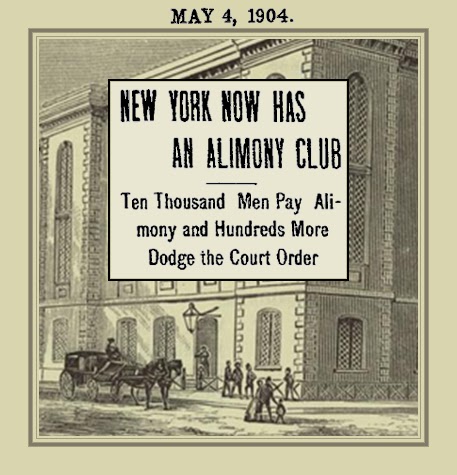 In the late 19th to early 20th century the Ludlow Street jail in New York was America’s symbol of the scandal of what came to be called the “alimony racket.” The jail was often called “The Alimony Club.” In the late 1920s the Ludlow Street jail was to become one of many nodes across the nation from which formal anti-alimony organizations were to spring. It would be fair to say that in the United States the men’s rights movement has its foundation in these anti-alimony organizations. (New research, however has uncivered the 1896 formation -- in Hoboken, New Jersey and Atlanta, Georgia -- of organizations that fought against proposals for bachelor tax.)

The American anti-alimony organizations drew inspiration from the jailhouse “strike” by Samuel Reid in California, who in 1925 began his highly publicized career as an “alimony martyr” and articulate activist for men’s rights. Before he finally left jail, almost 3 years before his campaign had begun, several formal anti-alimony organizations had sprung up across the country and offered assistance to Reid, popularly known as “Alimony Sam.”

The following article gives some indication of the early rumblings preceding the explosion of men’s rights activism of the 1920s.

FULL TEXT: Ten thousand men in New York, it is estimated conservatively, are paying alimony, says the New York press. Hundreds, perhaps thousands, are dodging it. Ten thousand women are receiving  returns from ventures in matrimony that lasted anywhere from a few days to many years, and hundreds would collect similar payments if they could. Many of these men are supporting two households. Some of them have married again and must provide for wife No. 2 as well as for wife No. 1. Others are called upon to furnish funds for the maintenance of their former wives, although these women may have becomes the wives of other men. The general rule of the courts is to allow the woman one-third of her husband’s income as alimony, which makes the payments range from $5 a week to $100 or more, although the larger amount is seldom reached.

The Alimony club of New York, as this aggregation of men is known, is one of the largest in the world and its non-resident list is a wonder. The out-of-town members are the dodgers, and these find it convenient to visit New York on Sundays, when writs in civil processes may not be served on them. They have taken up residence in neighboring states. New Jersey, Pennsylvania, and Connecticut, and Jersey City, Hoboken, Newark, Greenwich and other cities and hamlets have what are known as alimony colonies. Human ingenuity has worn its fingers to the bone to dig up some method of remaining in the state and avoiding the payment of the sums ordered by the courts, but the only way it has found is for the erstwhile husband to go to jail periodically and purge himself of contempt of court and at the same time get rid of the burden of accrued debt. A certain inconvenience attaches to this method, however, so that recourse is seldom had to it.

The size and influence of the non-resident list of the Alimony club has been recognized and members are catered to by transportation companies. Not for nothing does the Pennsylvania railroad run the “alimony train” from Philadelphia to New York on Saturday nights, landing passengers in the city just after the stroke of midnight. Not for nothing does it start the same train homeward again just before the “witching hour” on Sunday, for it is well patronized by men whose business keeps them away during six days and permits them “to blow in for a sniff of New York” only once a week.

“Whenever you see a man in the theater district looking often at his watch on late Saturday night,” said a railroad man, “you may know he is a member of the Alimony club. He is giving  himself until the last minute before starting for the ferry. You never can get one of them to forget the hour.”

Not for nothing are suburban trains and ferryboats of other lines run at the same hours, for the alimony colonies along the lines are deserted from Saturday evening to Monday morning.

One former resident of New York who lives in Philadelphia makes this trip every week. As soon as the decree was given against him he packed up his belongings, wound up his business interests and hied him away. But he could not cut the social ties that bound him to the glittering district of upper Broadway so he returns to it when the streets are clear of deputy sheriffs.

Another man whose home is in the same city makes the trip two or three times a month, but he never knows whether he will get back. He is far in his former wife’s debt and she is anxious to collect from him. She knows of his visits to New York and has obtained an order for him to show cause why he should not be committed for contempt. Every Sunday night a man with the order is waiting at the ferry station, hoping the debtor will miss a car or forget to look at his watch, so he will arrive after the midnight hour. Any little accident, and the man will remain in New York for an indefinite period.

A third man moved to Newark after the judgment of the court was given. He could not give up his business interests, as he keeps in close touch with them throughout the week by telephone and comes to his office on Sunday and goes over the week’s transactions.

In the colony in Greenwich is a man who directs his business by proxy. Full reports are taken to him every night by a clerk and he sends his orders back by the same messenger. The method is slow and not altogether satisfactory, he says, but it is better than paying alimony.

One class in particular that is on the non-resident list of the Alimony club is the actor’s. Many a player foregoes engagements in New York because he will not, or cannot, obey the mandate of the court that he hand over to his former wife a part of his stipend. Chief among these men was Robert Mitchell. For ten years he was absent from the city because of a decree issued in 1891, and he returned this season only when the death of his wife who had divorced him cancelled his liability. The award in the Mitchell case stands among the large ones on record, Judge Beach allowing $5,000 a year. Another large award is that made in the case of Mrs. Annette B. Wetmore, now Mrs. Markoe, against William B. Wetmore. That was for $6,000.

Highest on the list, however, is the case of W. E. D. Stokes, of the Ansonia. The referee advised an allowance of $12,000 a year. A compromise for a lump sum was made later, as is done in the majority of cases where the allowance is large and the man is wealthy. In such cases as W. K. Vanderbilt a division of property is made in lieu of alimony. 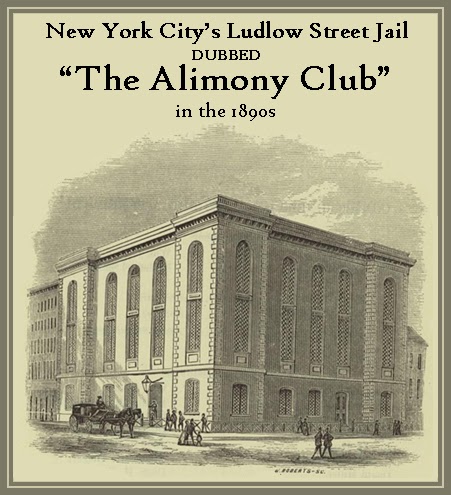