"A Dictatorship of the Eternal Woman Has Been Declared": The Soviet Alimony Racket - 1927 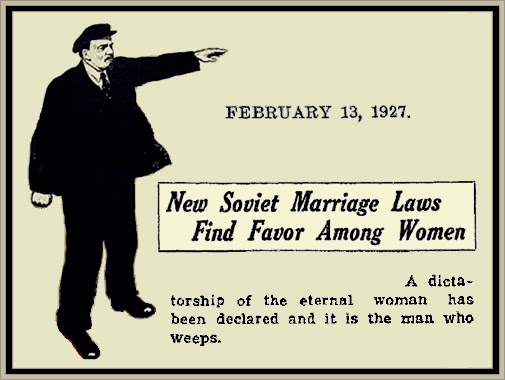 FULL TEXT (Article 1 of 3): Moscow, Feb. 12: — Frenzied feminists find the soviet marriage situation much to their liking. It is the male of the species that all new marriage laws attack. Once upon a time it was the woman who cried when she was deserted. Now the case is reversed. A dictatorship of the eternal woman has been declared and it is the man who weeps.

He weeps because a now law just passed in the Ukraine permits him to be married without knowing about it: He can simply be notified through the post that a certain lady says she has married him. That is enough, no other ceremony is necessary. The lady “announces” the marriage, and he is a benedict, whether he wishes it or not.

The law provides that either party may deal thus summarily with the other. But it is usually the man who finds himself married without knowing it. Then upon refusing to continue with the marriage, he can be made to pay alimony in case there is offspring.

Another cause for weeping is the fact that all over Russia a law now exists that will hold the man responsible for all matrimonial ventures, whether registered or simply do facto. He must pay alimony to any and all fair ladies who can prove that at one time, they lived in a state of de facto matrimony with him.

Cases that come to court show that this is easily proved. There is always some woman ready to swear that the defenseless man was the recognized “de facto husband” of her “girl friend.” A third person as a witness that the couple has a joint household, even if only for a few days, is all that is needed.

Should there be children, the question is settled without further ado. The woman collects. Should there be two women and two sets of children, they also collect and so on ad infinitum. So the new legislation insures a second thought on the part of the man before he goes in for a new and casual attachment.

The scions said the recognition of the de facto marriage as equally binding as the registered one would automatically quash any polygamous tendencies on the part of the man.

If he must divide his property with all the ladles of his heart, then he will take care that there is just one with a real claim upon him, reasoned the lawmakers. Perhaps there is logic in that.

The situation which the latest legislation strives to remedy is certainly bad enough. For the last few years there had been a new profession arising in the land of the Soviets. It is that of the “alimony widow.”

The “alimony widow” it is who lives in several short de facto marriages, and raises a brood of de facto children. For the support of her offspring she is legally entitled to collect a certain percentage of the wages of the men she names as the fathers of her brood. In this way she rakes in a much larger income than she could ever make working in a soviet factory or institution—and lives comfortably and happily ever after. 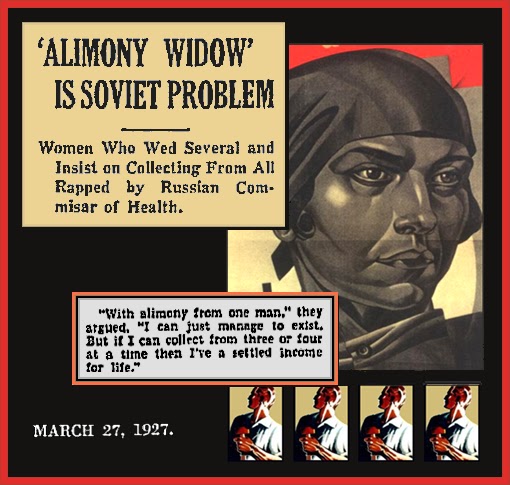 FULL TEXT (Article 2 of 3): Moscow. – Commissar Health Semashko condemned the superficial attitude toward matrimonial relations which exists among modem Russian boys and girls, in a lecture which drew a full house and enthusiastic applause.

As one method of control the Health Commissar suggested that Freud’s theory of converting sexual energy into more sublimated channels should be taught youths. Yet, he said, despite the lax living which is prevalent, university students of today are three times healthier than those of pre-revolutionary times.

These prematurely mated youngsters live “more intensely than common sense should permit,” he said. Semashko has just published a new book on the morals of the young in Soviet Russia entitled, “Rely on Alimony but learn to provide for yourself.”

This title is a parody on an old Russian proverb where the word ‘Alimony” has been substituted for “the Lord.”

Alimony has proved a stumbling block in the new order of matrimony. Young women who married for a week at various times were tar too clever in collecting a permanent income from the fathers of their assemblage of children.

“With alimony from one man,” they argued. “I can just manage to exist. But if I can collect from three or four at a time then I’ve a settled income tor life.”

Chiefly against these “alimony widows” Semashko directed the complaints in his book.

[“‘Alimony Widow’ Is Soviet Problem - Women Who Wed Several and Insist on Collecting From All Rapped by Russian Commisar of Health.” Syndicated, The Charleston Gazette (W. Va.), Mar. 27, 1927, p. 9] 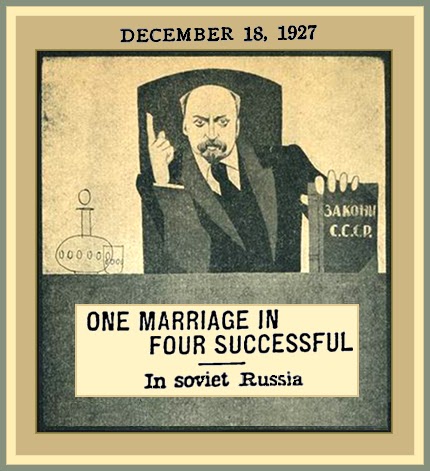 FULL TEXT (Article 3 of 3): Moscow, Dec. 17. – In soviet Russia a couple can be married one minute and divorced the next. The marriage need not cost anything; the divorce requires about 30 cents for the blank form and the official stamp dissolving the union. A marriage requires only the consent of both parties [not true; see articles above]; a divorce the consent of only one.

That is the explanation for the fact that during the first nine months of 1927 there were 9,681 marriages and 7,255 divorces. Many a citizen of the soviet has been married seven or eight times in a single year. Immediately upon issuance of the divorce decree each party is free to take another mate. And a woman may marry as many times as she pleases and still retain her family name.

For a related article see: Alimony Racketeering in the Social Justice Paradise of the Soviet Union - 1926 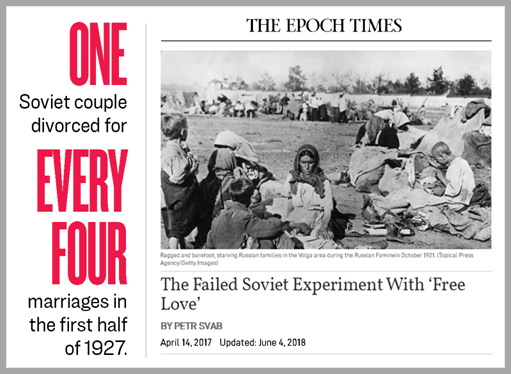 EXCERPT: Thinking of “free love” may evoke images of Woodstock rather than early 20th-century Soviet Russia, but it was in fact the early communist regime that undertook perhaps the most ambitious attempt at unleashing human sexuality in history—with predictable results.

As soon as the communists took power in 1917 in Russia, they began to systematically enact policies that followed the doctrines of Karl Marx. Their dream of a materialistic utopia could be attained “only by the forcible overthrow of all existing social conditions,” as Marx had written in the “Communist Manifesto.” 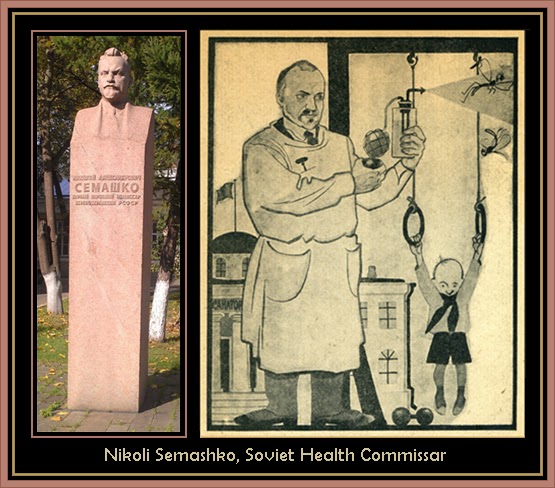