An Anti-Alimony Organization Attempted in the U.S. - 1912 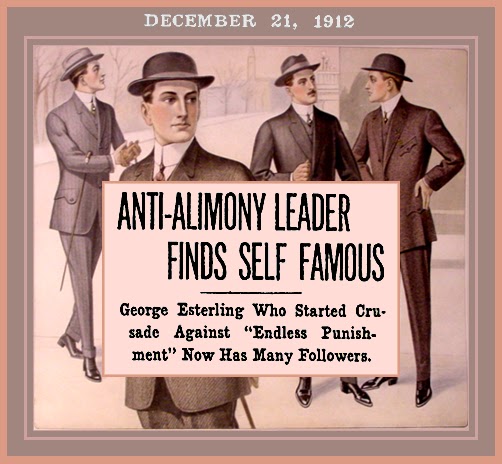 Here is a report of what may be the first attempt ever to establish an anti-alimony organization. It seems that despite some early enthusiasm from parties across the land the idea never coalesced into a true organization. it would take another 15 years until the founding of the American Alimony Payers Protective Association in New York City by Robert Ecob for that aim to be realized.

The articles below offer a his-and-her version of the subject at hand. At this early stage of what would become a major public debate the arguments were quite simplistic and the question of merited alimony versus predatory alimony racketeering, “polite blackmail,” perjury, debtor's prison and persecution is not broached.

NOTE: Definition of the word “grasswidow”: A woman who is divorced or separated.
***

This ad appeared in a Denver newspaper today. It was put in by Geo. R. Esterling.

Esterling is paying alimony to his ex-wife just now. He wants to form a league of grass-widowers and take the alimony question up to the supreme court of the United States.

Esterling’s is that is unconstitutional to fine a man for the rest of his life for a matrimonial mistake.


“When a man commits a burglary he is punished for a certain length of time,” says Esterling. “But at the end of that time, he is free to start life anew. Alimony goes on forever.”

FULL TEXT: Denver, Dec. 21. – George Esterling, originator of the plan for the organization of all alimony players in the country to make a country wide fight against “Paying alimony forever,” has found himself famous. From all parts of the United States scores of letters come from other “victims” practically all commending this scheme.

From Everett, Mass., comes a letter from a man who proposes to establish at least one alimony club in Massachusetts. He says: “I am in favor of making the fight for our rights a national one and I am sure that if we all stand together and fight this dreadful imposition of endless punishment, and fight it increasingly, we will accomplish our purpose.”

A letter from Newcastle, Ind. among other things, says: “Men as a class are a bunch of gelatin spined shrimps. All that a woman finds it necessary to do nowadays is to bring a charge against a man and all his neighbors will say: “Well, he’s always seemed a nice fellow, but you never can tell.”

“A woman can even murder her husband in cold blood with the certainty that right after her acquittal she can take her choice of taking a position in vaudeville, or in the office of some longwhiskered billygoat who has been watching the farce of a trial.” 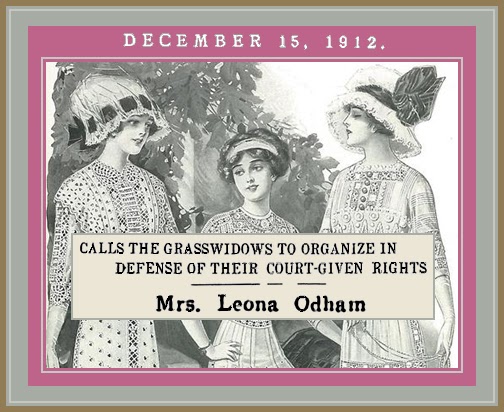 FULL TEXT: Denver, Dec. 14. When George Esterling, would-be benefactor of all divorced mankind, proposed two days ago an organization of ex-husbands to bring relief to those who have been sentenced to pay alimony to their former wives for the rest of their lives, he forgot that divorced womankind might have something to say.

A woman now aspires to be founder of an organization for the protection of ex-wives who, in her opinion, are the real victims of matrimonial blunders. She is Mrs. Leona Oldham, freed from her fetters after a ten minutes hearing in the county court Thursday.

“It’s a woman in nearly every case that bears the real burden of a matrimonial mistake. She is the one that makes the big sacrifice of her home, her friends, her position and herself,” said Mrs. Oldham.

“Too many men regard marriage as a mere pastime. They don’t feel any responsibility about marriage. A man has no business marrying a girl unless he expects to support her as long as she is his wife or his grasswidow.”