The American Dating Racket in 1938 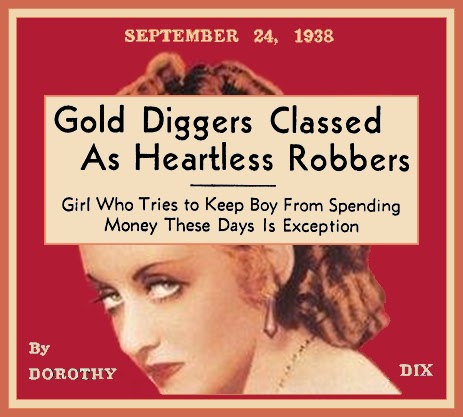 
DEAR MISS DIX – Do you think the girl who is always trying to save a boy’s pocketbook, even though she may not be going to marry him, is appreciated as much as the gold-digger who is out for all she can get? I have always in mind the fact that a great deal of money and try to keep him from spending money upon me, but my friends say I am foolish not to take all I can get, and certainly, as far as I can see, I get no thanks from the boys. So where am I? --- Mabel.

Answer – from the way boys complain about how the girls hold them up, and what it costs to take a Jane out for an evening’s diversion, I should think that all the young men of your neighborhood would fall on your neck with loud cries of gratitude.

For the gold-diggers certainly are heartless robbers. They go on the assumption that every youth is a millionaire, although they work right at the next desk to him and are perfectly aware that his pay envelope has no more in it than theirs.[Note: The “pay gap” theory, a fairly recent concoction, is a fraud. The idea that women could not support themselves before Marxian gender feminists took over universities and promoted government policies based on their fake data is also a hoax.]

They may know that one dinner-dance will send him to a cheap lunch counter for a month; that a taxi takes the shoes off his feet, and a theater strips the coat from his back, but so long as they are given a good time they should worry over what happens to the poor simp who lets them hold him up with a pair of blue eyes and who hasn’t enough backbone to say “No” to a female grafter if she has a peaches-and-cream complexion.

So one would think that the boys would simply mob the girl for dates who had enough heart and conscience to spare their pocketbooks; who would eat enough at home to stay her stomach until she got back and was willing to dance to a radio instead of demanding to be taken to a club where there was a 20 piece jazz band.

But men are funny things and there is no understanding them when it comes to the question of women and money. Somehow, they always want to make the grand flourish, anyway, as if they had the whole United States treasury be hind them.

The poorest boy is nearly always the one who grabs up the check and pays it, who sends a girl the longest-stemmed roses, who bus the most expensive seats at the theater and who gives a dollar tip when a dime was all that was needed.

There are very few men who ever have the courage to tell a girl they can’t afford a thing, and it offends most of them for a girl to show that she knows that they can’t afford it by suggesting doing something cheaper. So it is difficult for women to know what line to take with men. Perhaps the best way is never to suggest anything yourself but to fall in with the man’s plan. Then if he spends more than he can afford the crime is at least on his own head. Though that won’t save him from blaming the girl. But that is the chief pleasure men get out of women – making scapegoats of them.

Note: The original text has an additional letter/reply on a different topic which we have excluded here.

Email ThisBlogThis!Share to TwitterShare to FacebookShare to Pinterest
Labels: Dating