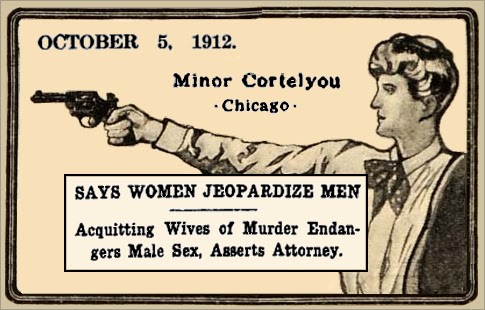 “She Fears You” is the name of a mandatory conditioning session initiated in 2010 which some universities require their male students to attend. It is “a program at which they will be pressed to acknowledge their personal complicity in a “rape culture.” “She Fears You” is based on the theory that men need a “combined cognitive and emotional intervention” in order to change their “rape-supportive beliefs.” 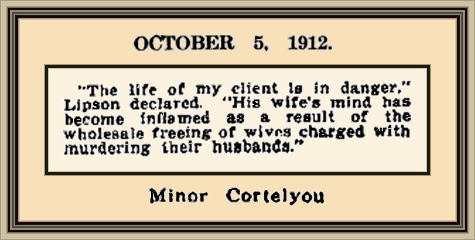 FULL TEXT: Chicago, Oct. 4. – Minor Cortalyou, a salesman, appealed to-day to the Court of Domestic Relations for protection from his wife. In arguing the case Isaac Lipson, his attorney, said:

“No man’s life is safe from an attack by an infuriated woman since the freeing of so many women accused of having murdered their husbands.”

Cortalyou testified his wife had threatened to kill him and had driven him from home. He had been arraigned for alleged wife abandonment. Within the last two years four or more women have been acquitted in Chicago courts of having either shot or poisoned their husbands, and in other parts of the country as many more were freed.

“The life of my client is in danger,” Lipson declared. “His wife’s mind has become inflamed as a result of the wholesale freeing of wives charged with murdering their husbands.”

NOTE: An article dating from 10 years following this one, called ”Woman – And Her Right to Kill” shows just how well-founded the concerns expressed by  Mr. Cortalyou in 1912 really were.