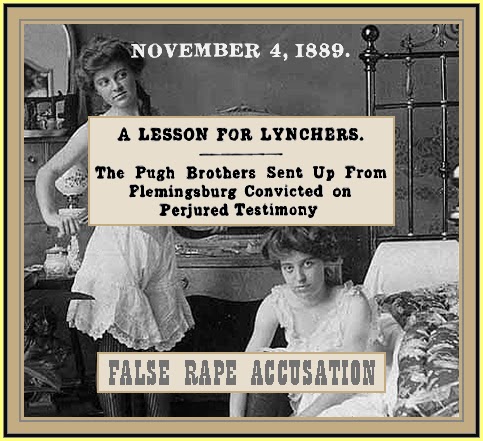 FULL TEXT: Readers of the Bulletin are no doubt still familiar with the facts in the case of Commonwealth against Grant and Elihu Pugh, who were convicted at Flemingsburg about a year ago, and pent to the penitentiary for twenty years for rape.

A special says it was developed Friday they were convicted on manufactured and perjured testimony; that the alleged victim was a notorious woman who now consorts with low colored courtesans to whom she confessed her schemes, and they have been verified by careful investigation.

There was an epidemic of criminal assaults in Fleming at the time, no less than eight being committed in thirty days, and the public mind was violently inflamed. One night a mob broke into the jail at that place. They secured but one of the prisoners a negro charged with rape.

He was taken to a bridge near the town limits and strung up. The Pugh brothers, however, were brought here for safe keeping and lodged in the Maysville jail until the next term of court, when their trial resulted as above stated. While here they were seen by a representative of the Bulletin and protested their innocence, asserting that the woman had accused them falsely. But little attention, however, was paid to their protestations at the time. The recent developments have put a new phase on the case though, and the Governor will be appealed to at once to pardon them. The petition is signed by all the magistrates of Fleming County, ten of the jury who convicted, one being dead and the other removed, and the county and district attorney who prosecuted.

Commenting on the case the Cincinnati Post says: ‘The men have served but a few months of their twenty years’ sentence, and now by the confession of their accuser they are found to be innocent. The application is obvious. If the mob had succeeded in murdering two innocent men in the blind fury of the moment their consciences must have been most unpleasant companions henceforth.”

[“A Lesson For Lynchers. - The Pugh Brothers Sent Up From Flemingsburg Convicted on Perjured Testimony.” The Evening Bulletin (Maysville, Ky.), Nov. 4, 1889, p. 3]