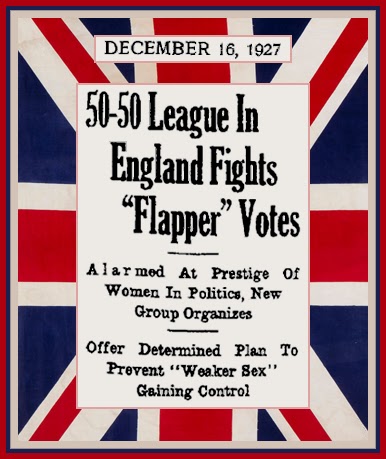 FULL TEXT (Article 1 of 3): London, Dec. 16.—With the “restoration of man’s “lost prestige” and “no votes for flappers” as its aims, the Fifty-Fifty league is the latest of the many anti-feminist movements in England.

With a membership roll of already 30,000, the Fifty-Fifty league is out to succeed where others have failed. It views with alarm the growing infiltration of women into public life, and. proposes to combat the “domination” of the weaker sex, and to ensure that in the future control of England men shall play at least as prominent a part as women.

“We are going to make a determined effort to put a stop to the handing over of the control of .England to women, and we mean to put man back. on his pedestal,” John MacArthur, secretary of the organisation, told International News Service. “The proposed extension of the English franchise to women of twenty-one is absolutely the last straw,” he added.
.
“Women want all the power of government without the responsibility men have to face,” MacArthur continued. ‘‘In other words, they want to dictate what we shall do, and then watch us do it.

“Man, since the beginning of time, has been the dominant sex but in recent years, women have made continual encroachments on his rights. If we can get a strong enough membership we hope to limit their powers on a fifty-fifty basis with men, and to achieve the emancipation of our sex. 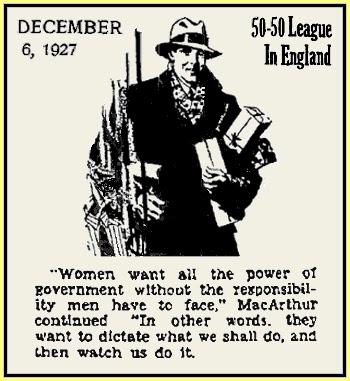 “If women get control of Britain they will lead us, intentionally or unintentionally, into war, and that will mean that the manhood of Britain will fight at the dictation of the woman voter—who does not fight.

“Women are responsible for Prohibition in the United States, where woman-worship is a mania, arid the legislation there is an absolute farce.

“Call us women-haters if you like, but we don’t ask that women be deprived of all their privileges, we want them to pay more attention, to the thing that concern them and to leave the government of the country to men,” MacArthur continued. 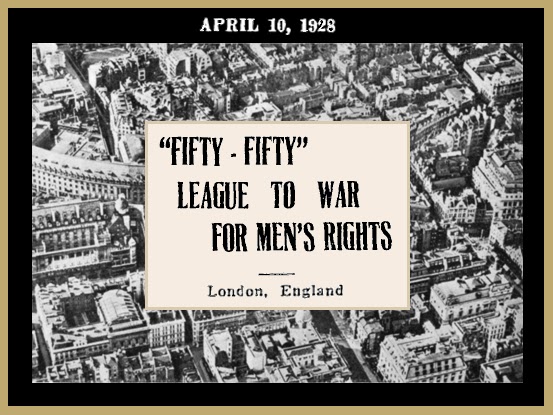 
FULL TEXT (Article 2 of 3): London, England, April 10.— The enfranchising of all women at the age of 21 has brought into existence. “The fifty-fifty league” whose members want to do something to offset the placing of men voters in a minority in the United Kingdom.”

The League stands for “the emancipation of men from feminist domination” and it has issued a manifesto headed “The Sex War.”

The leaguers contend that, as women will now be in a position to dictate the country’s policy, they must be prepared to accept the logical consequences.

The manifesto therefore demands that immediately political power in the country is transferred from men to women, and declares:

(1) Women shall be liable to military conscription on exactly the same terms and conditions as men are or may be liable thereto.

(2) All sex privileges, concessions, and immunities presently enjoyed by women shall be withdrawn.

(3) All laws and practices which relieve women of the economic consequences of their acts, shall be annulled.

(4) The marriage laws and all customs and usages which arise therefrom shall be rectified.

FULL TEXT (Article 3 of 3): Such is the cave man aspect of an international congress that is to be held in Vienna at the end of this month that the promoters are finding difficulty in securing British delegates for it. The promoting body is known as the World’s League for the Rights of Men [Aequitas Weltbund für Männerrechte, founded in Vienna early 1927 by Sigurd Hoeberth (Höberth) following schism of the organization he co-founded in March 1926, Bund für Männerrechte], and its primary object is to combat the political influences making for any increase in women’s emancipation in all countries. Anti-feminist societies and tourist agencies here have been approached to take a practical interest in the conference. The agenda submitted to them takes the form of a list of demands, which are to be discussed seriatim in the Old Royal Palace in Vienna Equality is the watchword, but the only Britsh organization that appears to take the movement very seriously is the Fifty-Fifty League, the chief figure in which is a Glasgow man in London – who is a bachelor.