Fighting the Alimony Racket in 1938 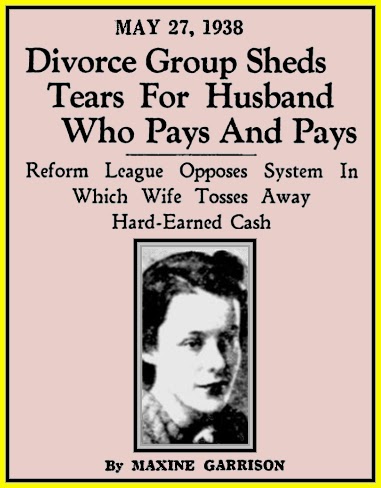 FULL TEXT: The National Divorce Reform League is upsetting all precedent by trying to give a break to a forgotten man of New York’s Domestic Relations Court, the husband. it seems that in a case of non-support coming before that court the wife is represented free of charge by the Corporation Counsel, but the husband must present his own defense or retain counsel.

Obviously, the husband in most cases can hardly afford lawyer’s fees, and the poor man usually gets lost in the legal jungle. Many men haled into the court have complained that they were talked into a stupor by the lawyers mustered for their wives.

The mere thought of someone’s taking interest in the husband of Domestic Relations is enough to bring tears to the eyes of even the most hardened reader of divorce cases. A system which requires that a man pay heavily for the privilege of once having called this women his wife is tear-jerking in itself. Too many selfish women have, through the sobbing plea of “I gave him the best years of my life,” been able to put a first-rate lien on their husbands’ income forever after. The husbands, who’ve already supported them for a good many years, get no sympathy from anyone.

Should a man’s income be cut, or should he lose his job entirely, no account is taken of such facts if his ex-wife wishes to make him pay. It’s “pay up, or go to jail.”

That this already lop-sided system should add the further irony of allowing the wife free counsel but forcing the husband to fight his own case (when whatever small change may be around is in the wife’s pocket) is no less than heart-breaking.

While we Americans sneer at the medieval domesticity of other nations, which makes the husband the master in no uncertain terms, those other nations have laughed right back at us for our idiotic glorification of the American wife. The American husband, it is claimed, makes the money but his wife gaily tosses it away. He is expected to stick to his job, but she sloughs off her housekeeping with a flip of the dust mop and spends most of her time in beauty parlors or at the bridge table. If she decides that she wants her “freedom,” she gets not only that but enough alimony to keep her from having to lift a finger for herself. And our European cousins think that such goings-on can hardly be turned be termed marriage.

Even the husbands over here probably wouldn’t really want a return to the shackles of the old days. But they would be the first to admit that women have walked roughshod over their own newly won privileges, and a harsh word from the law might do the more scheming females a lot of good. On those grounds we can only hope that the National Divorce Reform League wins its care for free counsel for the husband in arrears on payments to his onetime wife. It might just be the heralding of a much needed swing back toward equality between the sexes.