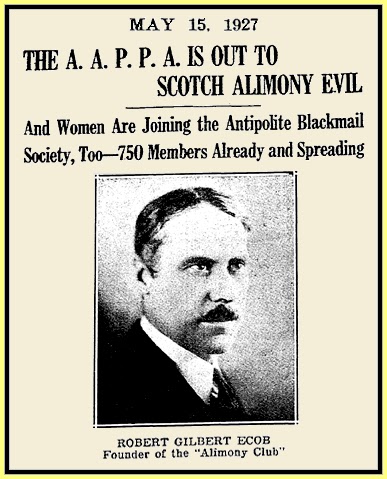 All the early Men’s Rights organizations in the United States were focused on combating the epidemic of alimony racketeering. The American Alimony Payers’ Protective Association was founded in New York City in May 1927. A month later the Alimony Club of Illinois was founded in Chicago.

FULL TEXT:  Alimony, for many years, has been the goal of disgruntled wives, the material of the professional joke-smiths, and the weekly or monthly bête noir of all the ex-husbands who had to pay it.

Alimony, for many years, has been taken for granted as fine, progressive American institution.

But now no longer. For just the other day in New York a very earnest man appeared at the State capital with papers and a speech and all the legal requisites, to form the very first association of its kind in all America. [Chicago was to follow with the second, The Alimony Club of Illinois, in June 1927.]

The gentleman was Robert Gilbert Ecob, New York architect by profession, alimony fighter by avocation. Mr. Ecob is the founder and executive secretary of the first American Alimony Payers’ Protective Association, duly incorporated and now grown to 750 members. When Mr. Ecob launched his “Alimony Club” he explained its purpose and the reasons which prompted him to found it.

“The American institution of easy alimony,” said Mr. Ecob, “is responsible for the largest share of wives gone mad, marriages wrecked, husbands ruined, unscrupulous divorce court lawyers unscrupulously enriched. Alimony, in our country, and all that goes with alimony have become a menace to our children, our homes, and our law courts.

“Polite blackmail is committed every day in the name of alimony, perjured testimony is suborned in sadly too many instances; unscrupulous women, in our state of New York, have actually contracted marriages with wealthy men of wistful affections, just to bring about a speedy quarrel and collect the alimony ever after.

“If we are to protect our marriages, we must fight this easy alimony. That’s why I and the other founders of our association, have taken off our coats and started in to work.”

So much, Mr. Ecob says, by way of explanation. Then he elaborates, giving facts, details, specific cases which came to him when he had studied the matter of legal separation, alimony, shyster divorce court lawyers and disgruntled wives.

“First,” says Mr. Ecob, “our association admits that the wife whose marriage is hopelessly wrong is entitled to alimony. But our association urges that many a reconciliation after an early quarrel would result, did not the average judge award alimony so easily. Now the women’s rights women will tell you that even with the vote women don’t have equal political rights. They don’t. they have political rights far, far ahead of any a man has. The husband in court is too generally judged and ordered to pay before he has adequately defended himself.

“But let me tell you of one or two pathetic cases we turned up in our study.

“There was Raphael. He was just a laborer, speaking poor English. His wife told a lurid tale to the judge, which our investigators later proved was made out of whole cloth in the office of her rascally divorce court lawyer. Raphael’s wife had learned American ways; she wanted to be rid of Raphael, but she wanted to keep his support.

“The poor wretch, on the strength of her story of abuse which never happened, was ordered to pay her $30 of the $40 he made weekly. He was also ordered to put up a $500 bond, to insure the regularity of his payments. That poor devil hadn’t $500! He had no lawyer, nor any means of procuring such a bond. He was promptly clapped into jail for contempt of court. When he had been in jail three months, he was ordered to pay three months arrears in alimony. ‘How can I?’ he asked, ‘when I haven’t worked, having been in jail?”

“’Very well,’ said the fine legal system of our State of New York, ‘then you go back to jail again, for contempt of court and for arrears in alimony. In addition, we impose a fine.”

“Now, our association contends that this procedure is violating the constitutional rights of this American naturalized citizen, since it seems to our advisors, very much like imprisoning a man and finding him for what is practically, the same offence. At any rate, Raphael’s is to be made a test case.

“But, as we studied the haphazard administration of the alimony laws, we were amazed and chagrined by the fashion in which those laws played into the hands of wicked, unscrupulous alimony hunters. We uncovered the case of a young woman more beautiful than she was good or virtuous.

“While still on the sunny side of 30 she had inveigled an elderly man into marriage. her husband has comfortable means. Two months from the date of the marriage, she filed suit for separation and alimony.

“Now the things the wifes charged her husband with were – our investigation disclosed, absolutely false. They were all unpleasant sex charges, which had they been made public in a court trial would have ruined the man, professionally and socially.

“His lawyer heard the wife’s accusations. ‘You can fight it, of course,’ he said, ‘but the girl is pretty. If it’s a jury trial – and besides, it will be a public trial. She is not asking for a hearing in chambers –‘

“The result was that this respectable elderly gentleman whose life had been meticulous before his marriage, made over to this young adventuress more than half of his fortune to save his name and that of his children by a first marriage. a few days after the transfer was effected we found out that this young woman had been divorced by a previous husband who had named five correspondents. We told the husband. ‘It would not have mattered,’ he said. ‘I could not had lived through the public disgrace.’ It was just another instance of easy alimony. And the superior powers of women in domestic litigation.”

But not only in such cases, the “Alimony Club” declares, do innocent husbands suffer because of the system. There’s the question of human happiness and a husband’s right to a home and children – when he pays out his money for a home and children.

“We have a case of a wife her husband because of some slight tiff which most any couple might have had in the early, shaking-down process of marriage. had she met some sensible well-wisher, who would have given her a little sensible old-fashioned advice, she might be a happy wife today.

“She fell into the hands of a specialist in divorce and alimony, who began filling her up with an idea of her wrongs.”

“The husband had a good business, real estate, money in the bank. The lawyer clapped liens on everything he could lay his hands on. The husband, having money, begged the court to be allowed to use a little of his own funds to defend himself. Litigation dragged, shockingly expensive. After five years the wife had brought 31 actions, of various sorts.

“The husband’s business was quite ruined; his assets poured out to his lawyers, his wife’s lawyers, in alimony and other fees; the wife had collected just $1500, which had cost the husband $250,000 in litigation and business depreciation, first.

“Today that professional man is working for less than $100 a week – a ruined, unhappy citizen, all because he loved his wife, wanted to convince her of her folly, and trusted to the laws of his country to bring her back to reason. Again and again we see our present system kill the goose that lays the golden egg, without enriching the wife. The only party that often profits is the lawyer.

“But there are some ugly facts we should face. It is because of these facts that our association will be made country-wide, with a New England branch, a Middle Western branch, a Far Western branch and a Southern as well.”

So the only association of its kind in the world [the writer was unaware of the Austrian Liga für Menschenrechte, founded in 1926], has started to work. And each day it adds to its membership goodly numbers of women. “But women do not pay alimony,” you will say, quickly, “why, then, women?”

Ah, brethren and sistren, these women are the devoted mothers, sisters, maiden aunts and cousins of men who do. These devoted female relatives have now and then mortgaged a piece of real estate or taken money from the savings account to “buy out of jail” a male relative clapped there for alimony troublers. These women, so says Mr. Ecob, have greatly helped the cause already. 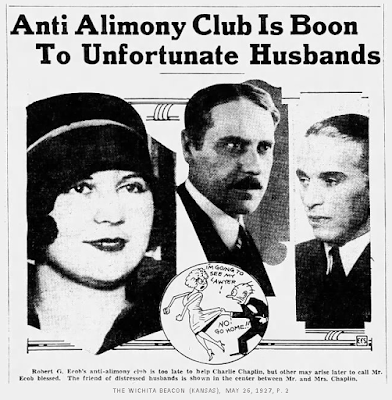 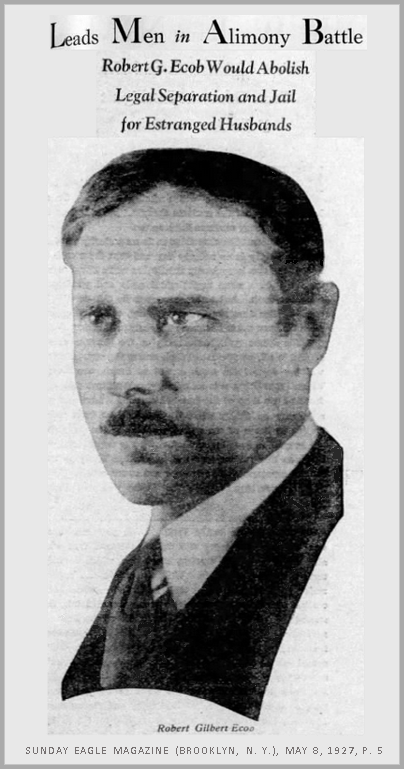 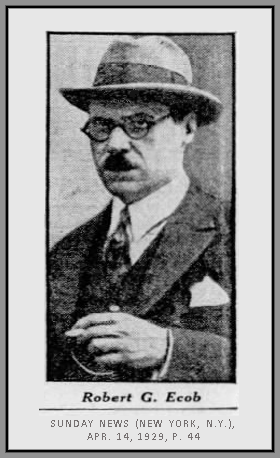 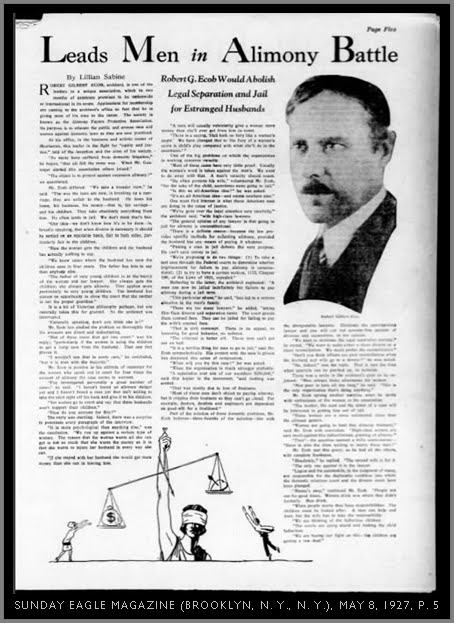 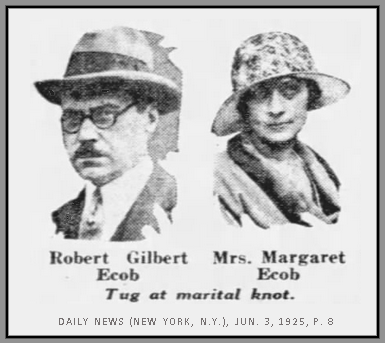