GIVE ‘EM THE AXE – Female Empowerment with an Edge This is a collection of newspaper stories concerning women who have empowered themselves by having murdered men, women, girls and boys with axes or with hatchets. The patriarchy has attempted to suppress women’s self-esteem and consciousness of strength by keeping the subject of women who murder using axes and hatchets hidden in the closet. But now we will reveal the blades in the closet.

Thanks to special funding provided by VBWUAA, the Violence By Women Using Axes  Act, this previously under-served research topic will begin to get the attention it really deserves.

***
All kidding aside, it must be said that violence committed by women is indeed a serious social problem, just as is the “cultural Marxism” which has corrupted the universities and the professions, resulting in deceptive studies and reports and in some cases, outright fabrications and cover-ups.

To illustrate how the myths of female non-violence  propagated by agenda-driven “experts” become ingrained in the public mind, Here is a chatroom post discussing a London stabling of two children: “Women don't tend to commit violent crimes like this. Just look at the statistics the majority of violent murders are committed by men. Women tend to kill using less forceful means, like smothering or poison/overdose. There are clear distinctions between how men and women who commit crime because whether you like it or not men and women are very different.” [Irina R; Netmums Coffee House Chat, 01-06-08, 13:28 #30]

***
You might wonder why the Lizzie Borden case is not included here. The reason is that it is still an unresolved case. There is significant doubt as to whether Lizzie committed the crime. There is an abundance of material on the Borden murders easily available elsewhere.

This is the first axe murderess collection to be compiled, as far as we know. It is only a small sample. There are many, many more cases.

Note: Both “ax” and “axe” are correct spellings of the word. There are a few cases here using hatchets or pickaxes.

1901 – George Lewis – Boston, Massachusetts – Wife bought a hatchet to use on her husband’s head – she had her eye on another man – but he survived the attack.

1908 – Belle Gunness – LaPorte, Indiana – murdered 2 husbands & dozens others, mostly “fiancés,” plus a number of children (she had been a baby farmer when residing in Chicago); men were killed with drugs or an axe. 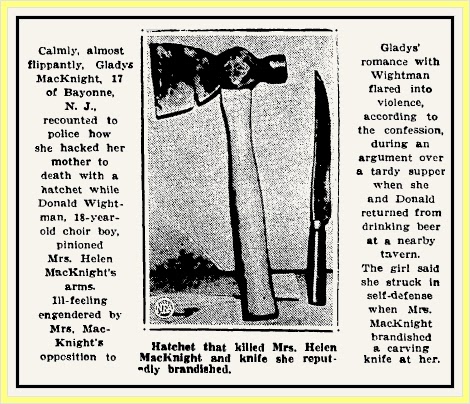