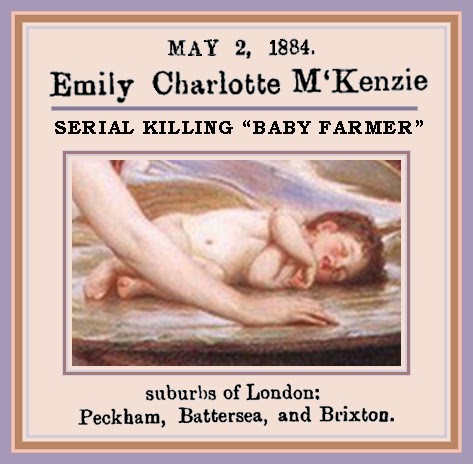 FULL TEXT: A baby farmer, Emily Charlotte M'Kenzie, in the suburbs of London, has been detected in her atrocious crimes and held for trial for the wilful murder of two infants. She had deliberately starved them to death, and three other babies found in her den were rescued in the nick of time from a similar death. It is the worst case of its kind on record since 1870, when one Margaret Waters was hanged on conviction of the murder of five babies. Her trial lasted three days, and in the course of the evidence it was stated that this hardened wretch, who was a widow but 35 years old, had lived in succession at Peckham, Battersea, and Brixton. In each of these localities the bodies of young children had been found during her residence there deposited in out-of-the-way places, and there is no doubt, from the condition of the remains, that she caused their death by neglect and starvation. Babies were often handed over to her tender mercies at railway stations or in the streets, by their unnatural parents or their agents, and in many of these cases a sum of money was given to the woman without any certainty that she would ever again hear from the parent. Under such circumstances it is impossible to tell how many murders this woman may have committed.