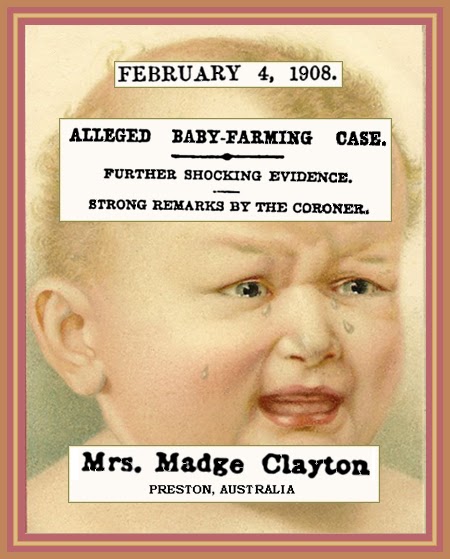 FULL TEXT (Article 1 of 3): Melbourne, Wednesday. – An inquest was held to-day into the circumstances of the deaths of five boarded-out babies. On January 17 12 babies were removed from a house of Nurse Clayton’s, at Preston, to the depot for neglected children at Royal Park, and five of them died there. Their ages ranged from six weeks to six months. The cause of death in each case was colic, accelerated by intense heat. One infant, aged five months, weighed only 5 lb; another, seven weeks old, 5¼ lb; and a third, six weeks old, 6 lb.

Madeline Murray, inspector under the Infant Life Protection Act, deposed that on January 13 she visited Nurse Clayton’s home, which was a six-roomed dwelling. In one good-sized room she found six babies. There were others in another room, and one was outside. Most of the children were suffering from dysentery, and were so dirty that she was affected for a couple of days. The children were in boxes and in makeshift beds. The bed-clothing was ragged and dirty. The place was not too small if properly aired.

Dr. James J. Sheahan said that when the children wore admitted at the Royal Park depot on January 17 they were in an extremely emaciated condition, and looked as it they had been starved.

Constable McCormlck gave evidence as to Mrs. Clayton’s residence at Whittlesea as a registered nurse. Before she removed to Preston in December last, he considered her an excellent nurse. She had as many as nine children there, and had the assistance of two girls. Everything was clean.

Agnes L. Taylor, a married woman, stated that she visited Mrs. Clayton at different times. She was there when Miss Murray called, and did not notice any bad smell. The children were thoroughly looked after. The inquest was adjourned till Saturday.

FULL TEXT (Article 2 of 3): Melbourne, Monday. 8 – Further remarkable evidence was given on Saturday at the adjourned inquest regarding the deaths of the five infants who were among the 12 boarded out to Mrs. Madge Clayton, a registered nurse, residing at Preston.

The Coroner: Is this portion of her report to you? “Jack Smith, 14 months old. Nurse J informed me he was three months, very small, and thin, and badly needs medical care and nursing. This child’s legs were tied together with a piece of rag at the ankles to keep him from kicking and disturbing the other babies in the same cot or box. There were four babies in this structure of 4 ft long, which was bad smelling and dirty.”

The Coroner: How were the children fed? —One of the bottles out of which the children were fed was a pickle bottle.

Did the children ever cry? —Yes.

What was done to them? They were put on the floor and given a good smacking until they stopped.

Marian Lane, a domestic servant, said she was at Nurse Clayton’s when she removed from Whittlesea to Preston on Christmas Eve. During the seven weeks witness was there Nurse Clayton kept the children nice and clean.

The Coroner: How were the children removed? – In the train, some were put in hat racks, and others on seats and on the floor.

Did you see any of the children with their legs tied? – Yes; and one had its arms tied to prevent it taking a teat out of its mouth.

After being warned by the Coroner, Mrs. Clayton said she did not wish to say anything or give evidence.

The Coroner said, “This is an inquest, the like of which has never occurred before, and I hope will never occur again. It is a good  thing that the children were discovered when they were, and it is a pity that they were not discovered before. The constable at Whittlesea, whose duty it was to visit the nurse, should have known that 12 children were far too many for one nurse, even with the assistance of two girls to look after them. I do not think he is free from censure for not reporting the number of children the nurse had. There is not sufficient evidence to warrant the nurse being committed for manslaughter, but she certainly should not be allowed the care of any more children; and it is possible to punish her for her cruelty to them it should be done. I return a verdict in accordance with the medical testimony, with a rider that the children were not properly treated by the nurse.”

Melbourne, Tuesday.—Yet another of the 12 infants who were entrusted to the care of Nurse Clayton of Preston, has died from colitis. As the child had been under the care of the doctor since January 17 the coroner has decided not to hold an inquest.

FULL TEXT (Article 3 of 3): Melbourne, Friday. – Nurse Clayton, of Preston, who had control of six infants, all of whom died, was charged at the police court to-day for failing to provide adequate nursing in the case of two of the infants, and was fined £1 on each of the two charges with costs.