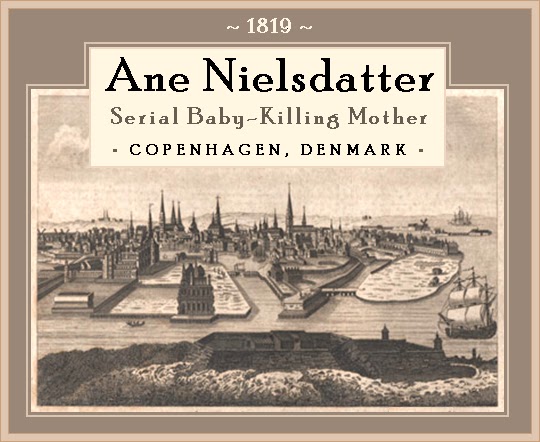 EXCERPT: This criminal was beheaded in Copenhagen, in the spring of 1819; her crimes constitute one of the most remarkable mental phenomena, which cannot be explained but by the principles of Phrenology, and her organization confirms, on the other hand, the truth of these to a degree which cannot be stronger or more evident. She was an infanticide; she confessed to have murdered five of her children; but probably she had killed a sixth too.

She was born at Roeskilde, a small town, 18 miles from Copenhagen, and was in her 17th year married to Hans Tenfew, a peasant. In the early part of her marriage she lived with her parents; but, as her husband bought a small farm-house at Fredrikborg, a village 22 miles distant from Copenhagen, she became a servant, and was, in the year 1817, separated from her husband. During her marriage she had six children, of which only one was alive at her execution; one of them died three weeks after its birth in 1799, and another died in 1808. What became of the others we shall immediately see.

In the month of May, 1818, she left the farm-house Dalsborg, where she lived, and took a natural child, that had been born in the spring of the same year, along with her. As she returned after some days without the child, and could not explain where she had left it, she was arrested; and now begins the communication of her crimes. She gave, with respect to the child that was missing, with great candour, the following explanation:—” Seeing the impossibility to maintain herself and the child, she resolved to kill it; she went, therefore, one day into the neighbourhood of Copenhagen, tied a handkerchief tight round the neck of the child, and threw “it into a lake near the town.”

From a question of the Judge, whether she had more to confess, she, without farther hesitation, said, that, from the year 1813 to 1817, she had murdered four others of her children; two of which were born in marriage, the other two were illegitimate. She had murdered them all in a very violent manner, by suffocating them, or killing them with a hatchet. The one was three years old; the others only half a year, or several months old. Besides these infanticides, she had killed a sixth too.

NOTE: The full article contains lengthy phrenological analysis and interpretation, which have been removed in this excerpt.


Wikipedia: For the most part, Denmark followed the style of other European nations, with government-employed executioners, called skarpretter (headsman) in Denmark. The headsman had the status of a Royal government employee. The last public execution was in Lolland of Anders “Sjællænder” Nielsen, by decapitation in 1882. The spectacle generated calls for the abolishment of the death penalty, particularly since the headsman, Jens Seistrup, had to swing his axe several times in order to complete the job. [Capital Punishment in Denmark, Wikipedia] 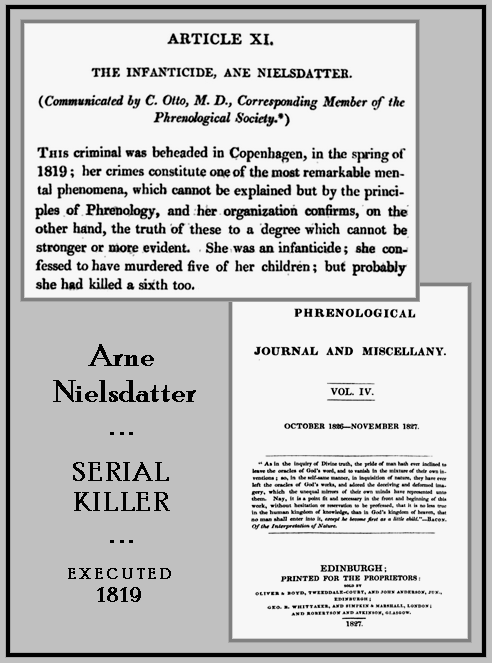