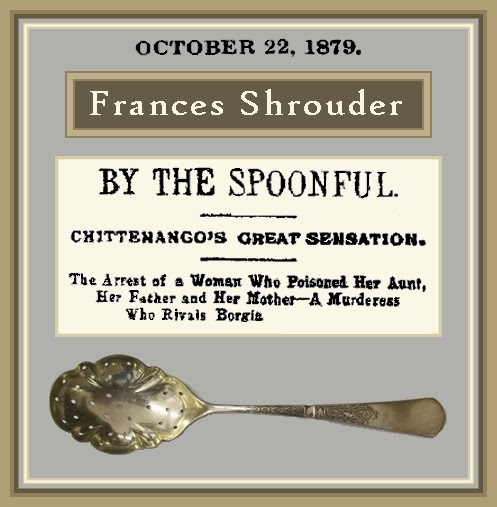 FULL TEXT: Syracuse, N. Y., October 21. – The village of Chittenango, fifteen miles east of Syracuse is greatly excited over the alleged case of a modern Borgia, whose deeds, if found guilty of the bloody deeds of the [illegible] of that name two weeks ago [illegible] lady named Mrs. Laney Barnard, a widow aged eighty years, died under circumstances that led to the suspicion that she was poisoned. Immediately after her death Frances Shrouder and the latter’s husband were arrested for the crime of poisoning Mrs. Barnard. It was shown on the coroner’s examination that Frances Shrouder purchased arsenic at the village drug-store the same week that her mother died, and both Frances and her husband were indicted by the grand jury at Morrisville for the murder of Mrs. Barnard. A chemical analysis of Mrs. Barnard’s stomach discovered arsenic in it.

This week there have been further developments, which, if substantiated, will prove Frances Shrouder to be one of the most cold-blooded murderers ever heard of in the annals of criminal history. Mrs. Louisa Pope, an old lady aged eighty years, a great-aunt of Frances Shrouder, came to Chittenango in April, 1876[?], and took up her abode with the Barnards. Previous to that time she had lived at the village of Truxton, in Cortland county. When Mrs. Pope came to live with the Barnards she had a $1,000 mortgage on some property in Truzton, and, also $800 in United States bonds, which she brought with her to Chittenango. Charles Barnard, husband of Mrs. Laney Barnard, was then alive. Within three months from the time that Mrs. Pope came to live with the Barnards she died very suddenly and under circumstances of the most suspicious nature. Her death was accompanied by violent spasms and other symptoms that would indicate that she had been poisoned. Her death occurred on the last Saturday of July, 1876, and as soon as she was dead Charles Barnard procured a cheap coffin of Mr. Greminger, an undertaker in the village, and immediately boxed the old lady up and allowed no one to see her.

The next day, which was Sunday, he started at daybreak for Truxton, carrying the body of Mrs. Pope in his wagon. He arrived at Truxton about noon, and insisted upon having Mrs. Pope buried that afternoon to Mrs. Pope’s death, Frances Shrouder was seen to have large sums of money in her possession, and on several occasions she endeavored to have bills of a large denomination changed at the village stores, and for a couple of years the Barnards appeared to be very flush with money. Charles Barnard claimed, after Mrs. Pope’s death, that the old lady gave him the mortgage, and as Mrs. Pope had no relatives but the Barnards, no one disputed his claim. Barnard kept the mortgage until be died.

Public opinion in Chittenango and in central New York now seems to be almost unanimous that Frances Shrouder poisoned Mrs. Pope in order to get her bonds, and old lady’s death, put in his claim for the mortgage as his share of the plunder. Since these facts have come to light public opinion in Chittenango is of the almost unanimous belief that Frances Shrouder poisoned her father also, who died under suspicious circumstances about a year ago. His remains have been exhumed and sent to Dr. Englehart and Dr. Manlius Smith, of Syracuse, for analysis of the stomach and viscera. The body of Mrs. Pope was exhumed at Truxton last week by Coroner Kendrick, of Cortland county, who impaneled a jury. Dr. Manlius Smith, of Syracuse, who had been sent for, was present when the body was exhumed, and brought portions of the vitals to Syracuse, where a most searching analysis will be made. The coroner’s jury adjourned until October 27th, when it will meet at John Wheeler’s hotel, and the inquest will be resumed.

The circumstantial evidence is very strong that Frances Shrouder poisoned her aunt, her father and her mother, and that she was urged to poison her father and mother by her husband. The authorities are of the opinion that Frances Shrouder will make a confession, admitting that she killed her aunt, her father and her mother. She is a weak-minded person, and already, it is said, there are evidences that lead the authorities to anticipate a confession. It is said that her husband, George Shrouder, is also disposed at the proper time to tell what he knows about the poisoning of the parties. It is anticipated that he may be prompted to attempt to turn state’s evidence in order to save himself.

[“By the Spoonful. – Chittenango’s Great Sensation. – The Arrest of a Woman Who Poisoned Her Father and Her Mother – A Murderess Who Rivals Borgia,” The Daily Constitution (Atlanta, Ga.), Oct. 22, 1879, p. 1] 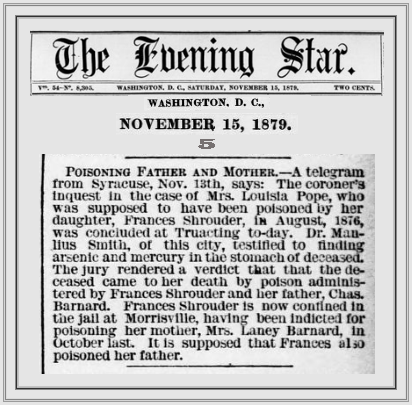 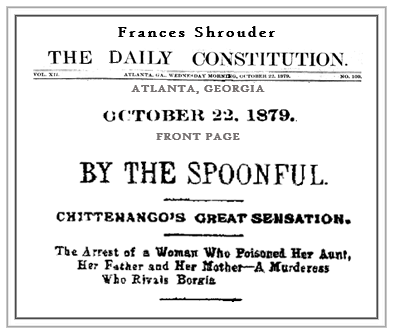