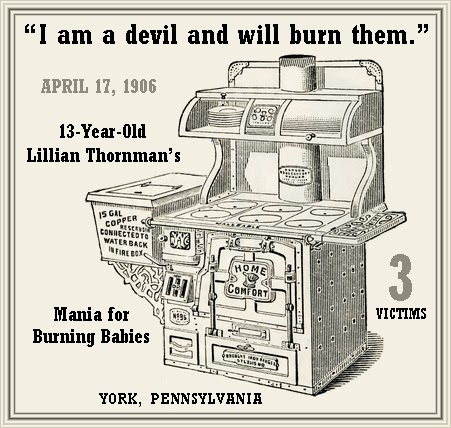 Note: “Thornman” is the correct spelling an is used in the York, Pa. newspaper, yet some out-of town papers misspell the name as “Thorman.” Detailed accounts of this case from the York Daily will be added later. At the bottom of the post is a chronology based on these articles.

The girl, who was employed to do light work around the house literally fried the child and while the child was writhing and screaming in its agony an aunt entered the room and rescued it, but the child had been roasted from head to foot and cannot live.

The servant girl in jail tonight confessed that she had fatally burned three other children in a similar manner, giving their parents the impression that they had fallen on the stove accidentally while climbing to reach something.

FULL TEXT (Article 2 of 4): York, Pa., April 17.—With a mania for burning children when they are bad, because, as she says, “I am a devil and will burn them,” Lillian Thornman, a 13-year-old colored girl, knocked upon a red hot stove a two-year-old daughter of Robert Dorsey, also colored, and for several seconds calmly watched her struggle to get off the stove and away from the boiler of hot water, which was poured over her body as she alighted on the stove. Another girl then ran in from the yard and saved the child from further injury. This was the Thornman girl’s third victim. A year ago she set Esther Louise Harris, aged three years, on a red hot stove and hold her fast until she made the statement that she was a devil.

Two months ago she threw hot grease over Leon Johnston, a small boy. Owing to the fact that she had been convicted of petty thievery she was to be sent to a Philadelphia Institution this afternoon, but was arrested after the burning of the Dorsey child.

She is now confined in jail on a charge of aggravated assault and battery with intent to kill.

FULL TEXT (Article 3 of 4): York, Penn. – Lillian Thorman, a 13-year-old girl, pleaded guilty to killing Helena Dorsey, a three-year-old daughter of Mr. and Mrs. Robert Dorsey. On Washington’s birthday the Thorman girl, having become angered at something the little Dorsey child had done, placed her on a red-hot stove. The child died later. The Thorman girl added: “I did it because I have the devil in me.”

FULL TEXT (Article 4 of 4): York, Pa., Feb. 25. – “Well, I ‘spose they’ll hang me; but I couldn’t help it; the devil that was in me made me do it.” So said 13-year-old Lillian Thornman, colored, when she was informed that Helena, the less than 3-year-old daughter of Robert Dorsey, also colored, had died of the burns she inflicted upon her on Thursday.

This is the case in which the demon-possessed young cousin of Mrs. Dorsey tossed the baby upon a red-hot stove and basted her with scalding water, after similarly torturing two other children on different occasions. She came came her from Philadephia, and was almost to be sent back to her step-mother there. Explaining her resentment on this score she said:

“All Thursday morning  the three Dorsey children were teasing me about my being sent back to Philadelphia, and at that I got mad. My temper got the better of me and I threw Helena on the stove.” 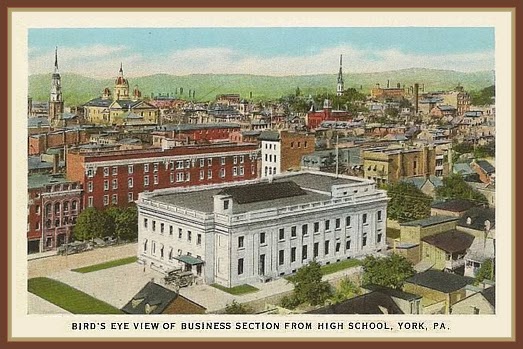 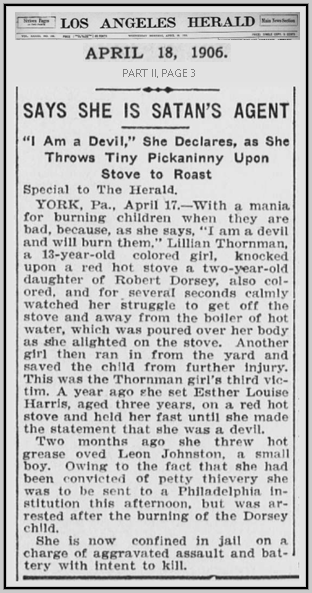