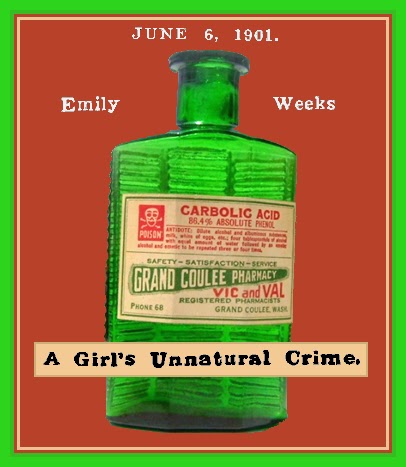 FULL TEXT: The amazing depravity of an Albany girl named Emily Weeks, 28 years of age, is responsible for her incarceration in the county jail, charged with a most unnatural offense. To prevent her mother discovering forgeries amounting to $2,900 which she had perpetrated by the use of her mother's name, she threw carbolic acid into her face, almost blinding her. The Albany County hank has preferred a charge of forgery against her. The girl took the money so that she might give it to a fellow named Williams with whom she is infatuated and who was confined in a hospital undergoing an operation. She says that she was introduced to Williams by Mrs. Catherine Leighton, who employed her, and that the latter induced her to draw the money from the bank, telling her she had as much right to it as her mother. Mrs. Leighton has been arrested as an accessory.