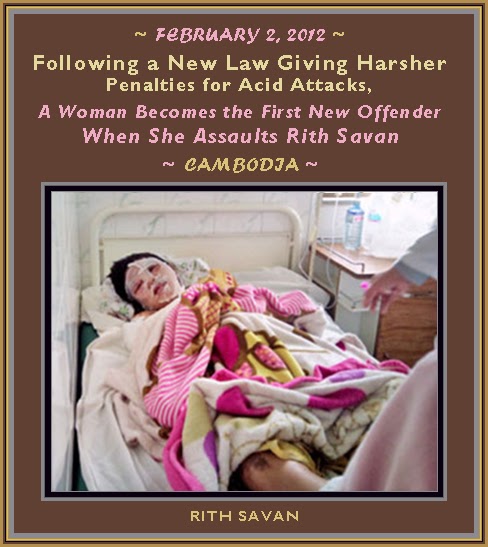 Cambodia – An unnamed woman, an acquaintance of her victim Rith Savan, attacked the 24-year old factory worker in her home in the Tuol Sangke commune,​​ in Phnom Penh  Russei Keo at 8 p. m. on February 2, 2012, in the first acid attack crime to occur since Cambodia passed a law went into effect on December 21, 2011 which gives harsher penalties for this crime. Almost every part of the victim’s body was burned by acid: her face, chest, stomach and legs

The assailant had entered the victim’s room while she was alone, carrying a bowl of acid hidden in a black plastic bag, called her name and targeted her face as she turned to look at the intruder. The acid dripped onto other parts of her body.

Almost every part of the victim’s body was burned by acid: her face, chest, stomach and legs.

Police were unsure of the motive for the attack because the victim was now unable to see and speak because of her burns.

The victim’s mother, Torn Puth, reported that her “daughter and the suspect know each other, but they were not close friends,” Torn Puth explained. “One day, I received the phone call from the suspect, who I just know by the name ‘Kha.’ The suspect asked her to take her daughter “back home because she had fallen in love with her husband. Then she hung up the phone.” She told the daughter Rith about the phone call and Rith called back and told the suspects sister, who answered the phone that the accusation was untrue and said that spreading such a lie could get the woman jailed.