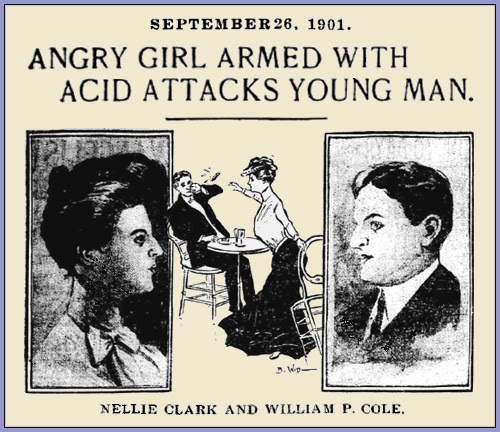 Miss Nellie Clark Says Desire for Revenge Caused Her Assault oil William P. Cole, Who Had Failed to Keep an Appointment Both Are Severely Burned and the Young Woman May Lose Her Sight.

FINAL MEETING IN CANDY STORE TO TALK OVER DIFFERENCES.

FULL TEXT: Miss Nellie Clark, a Bell Telephone Company operator, threw carbolic acid in the face of William Cole, a married man, yesterday afternoon and received most of the fiery liquid in her own face.

Frenzied screams the young woman as the acid ate into her flesh drew a crowd several hundred persons when both ran from Huyler’s candy store No. 716 Olive street to the Chemical building opposite.

Both were taken into custody after their injuries had been dressed. They are disfigured for life, and the girl may lose sight.

Miss Clark is 19 years old and before yesterday’s events was prepossessing in appearance. Her home, she said, is at No. 523 North Theresa avenue. Cole gave his age as 23 years, and stated that was a special agent for the Prudential Insurance Company. He is married and stated that his family is the East and will return St. Louis in October. He claimed to live No. 3816 Delmar avenue.

The crowd followed couple to Chemical building, and when the first report that a woman had dashed carbolic acid into a woman’s face was announced, several excited persons, shouted “Lynch him! Lynch him!” One person with a hammer was greatly excited and declared that he would brain the man as soon as the police brought him from the building. Manager James F. Cook of the Chemical building overheard the remark and requested the police to clear the corridor. This was dope, but many curious persons hung around entrance until Cole and Miss Clark were brought out.

Cole’s office being in the Chemical building, he knew exactly where to go to find a physician. Jumping into an elevator that was just about to ascend, he was taken to the office of Doctor John B. Logan in room No. 303. 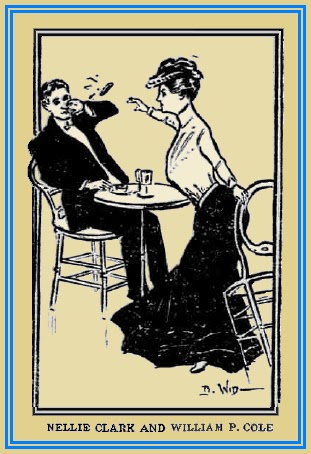 Manager Cook assisted Miss Clark to another elevator and she was taken to Doctor H. N. Lyon’s office, room No. 608. Screaming in agony as the deadly fluid burned into her flesh. She was hysterical, and for nearly an hour could make no statement. When finally she did consent to talk to the police who had gathered she stated that her name was Nellie Martin and that she lived at No. 5120 Old Manchester road. Later she changed this, address and made it No. 2512 Chouteau avenue. Both .numbers proved fictitious, and then she claimed that she lived at No. 522 North Theresa avenue.

After Doctors Lyon and Logan had bandaged the faces of the patients and applied lotions to counteract the effects of the drug. Cole was taken to the Four Court Moloney and Miss Clark was conveyed to the City Hospital. At the Four Courts Cole said to Captain Reynolds, reiterating his statement to a reporter for The Republic:

“I was dragged into this affair through my own folly. My family has been away all summer. I met this girl at one of the summer gardens. She told me her name was Nellie Martin. I have met her several times since then and had an engagement to meet her again late Sunday night. I did not keep the engagement and this angered her.

“This afternoon I met her at Seventh and Olive streets. I could not talk to her at the time, hut told her I would meet her at Huyler’s at 2 o’clock. I returned to the candy store at the appointed time and found the girl seated at a table. I sat down opposite her and she asked me why I had not kept my appointment with her on Sunday night. As I started to explain I noticed she was lingering a small package which she held in her hand.

“Suddenly, she arose and I comprehended her intention. I threw up my arm to shield my face, as she dashed the acid at me. My arm struck the bottle and I saw that most of the acid-ha- been dashed back into her face. When he felt the burning of the fluid on my face. I ran across the street to the Chemical building, where I knew I could find a doctor. If the girl’s name is Clark I do not know it. She told me it was Martin.

“I am glad to get out of the scrape as I have, and shall not prosecute her for her attempt to blind me.”

Cole was released on bond about 6 o’clock by Captain Reynolds, who says he will prefer a charge of disturbing the peace against him. 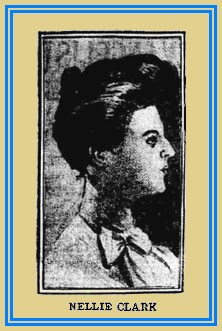 ~ “SOME THINGS THAT A WOMAN CANNOT STAND.” ~

“There are some things that a woman cannot stand,” said Miss Clark “when seen at the City Hospital last evening.

“I met Cole at Forest Park Highlands several weeks ago. He told me his name, but did not say he was married. I met him several times after that, as he say, and had an engagement to meet him Sunday night. He did not keep the appointment and it angered me.

“I met him to-day on Olive street near Seventh street. He promised to meet me half an hour later at Huyler’s. I went at once to Judge & Dolph’s drug store on Locust street and purchased the carbolic acid, telling the clerk I wanted it for disinfecting purposes.

“Then I returned to Huyler’s to wait for him. I had the acid put in a small jar, such as is used for salves. As I was talking to Cole I unscrewed the lid, and, thinking I had a good chance, dashed the acid at his lace. He threw up his arm, and this caused most of the fluid to rebound in my face.

“The pain was fearful. I followed him across the street and ran into a woman, knocking her down, as I entered the Chemical building. If Cole got anything he deserved it. I am not sorry.”

Miss Jennie Zork, a saleswoman at Huyler’s, told Policeman Moloney the story of the couple’s visit to the store, saying:

~ FINAL MEETING IN THE CANDY STORE. ~

“The young woman came in first. She ordered a glass of whiskey and seemed very nervous. She paced the floor for several minutes. I noticed that she carried a small package in her hand. She had just seated herself at the table when the man entered. They carried on a heated conversation. We could not hear what they said.”

“We had turned to wait upon other customers and the first we knew of the acid throwing was when we smelled the fumes. Turning around I saw the cup lying shattered on the floor. The man had run out the door and the woman was following him.”

At the City Hospital last night Doctor Nietert stated that he hopes to save his patient’s eyes, but considers the task difficult. The girl will be disfigured for life,” he declared. Doctor Campbell, senior surgeon, dressed the wounds, and he coincided in Doctor Nietert’s statement.

When Cole left Doctor Logan’s office he gave his name as T. W. Eloc. This, he later explained, is his name, Cole, spelled backwards.

Miss Clark insisted that her name was Nellie Martin until she was asked to explain why she carried several visiting cards with the name Nellie Clark in her purse which she left at the confectioner’s. Then she admitted her correct name.

She begged when taken to the City Dispensary that she might be taken home. Instead
of to the City Hospital. She stated that she had lived In St. Louis but one year and said she came here from Kansas, but refused to give the name of the city or town. The police have preferred a charge of disturbing the peace against the girl, as Cole refused to swear out a warrant charging her with throwing the acid.

At No. 2816 Delmar boulevard, where Cole claimed to reside, lives the family of W, M. Dell. At that house and others in the neighborhood no one could be found who knew Cole. 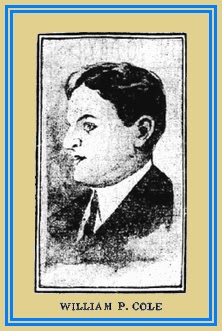 At No. 522 North Theresa avenue an elderly woman stated that the young woman who was then at the hospital was her daughter. “She works for the Bell Telephone Company as an operator,” said Mrs. Clark. “To-day she told me she did not feel well and said she was not going to work.

“Cole has been coming to our house about two months. Of course we did not know he was married. He was introduced to my daughter at a party given, I believe, by a young lady in the West End. At least that it what I have been told. I suppose my daughter ascertained that he was married and decided to avenge herself with the acid. I do not blame her.”

Officials of the Bell telephone office say that Miss Clark had been employed there as an exchange operator for about six weeks.

Miss Clark was released from the City Hospital last night on a bond signed by Robert V. Patterson, No. 3614 Locust street. She signed the name Nellie Martin to the bond and attached her address ‘as No. 2814 Manchester avenue.

I threw the acid in his face for revenge. He had fooled me. I did not know he was married until after he failed to meet me on Sunday night. If he got anything, he deserved it. I am not sorry.

I got into this affair through my own folly. My family have been in the East all summer, and I met the girl while at one of the summer gardens. She said her name was Nellie Martin. I never knew her by any other name, and believed she lived on Old Manchester avenue. I am sorry it has happened, but consider myself lucky to get out of the thing as I did with both of my eyes untouched.