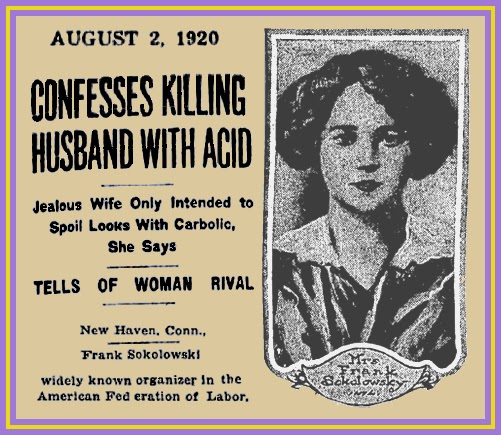 FULL TEXT: New York, Aug. 2. – Mrs. Alexandria A. Sokolowsky, twenty-eight, widow of Frank Sokolowsky, representative of the American Federation of Labor, who died of carbolic acid poisoning in their home at New Haven June 20, was arrested last night and locked up in police headquarters and charged with murder.

The detectives say she confessed she threw acid on her husband as he slept, because she had found love letters in his clothing and wanted to spoil his good looks.

The Sokolowskys lived at 25 Beers street, New Haven. At about 3:30 o'clock on the morning of June 20 Sokolowsky, blinded, seared and choking, ran from his first floor apartment shouting: "Doctor! Police!" He fell dead upon the porch.

Immediately afterward his wife sped to Bridgeport in a taxicab, paid the driver $115 from a roll of bills and vanished. She took $700 with her, the police learned. Sokolowsky was one of the loaders in a strike of brass workers at Waterbury, Conn., and his death was at once suspected to have been caused by strikers opposed to the conciliatory attitude he had adopted during the strike.

The police working on the theory he was murdered by persons opposed to his leadership until Mrs. Sokolowsky's absence became prolonged. Then a country-wide search for her was begun. Her photograph and description were gent throughout the country. She was arrested here.

After severe questioning at headquarters. Sokolowsky, with tears streaming down her cheeks, signed a confession of guilt, the detectives say. The confession, as given out by the police, in part, was:

“We lived happily for three years and then he began to stay away. He told me he had business to attend to. On June 4 I found two letters written in English – a language I could not read very well.

“I took them to a girl friend and after reading them she told me they were love letters. On June 5 my husband went to Brooklyn, .but came back later in the night. I wondered whether I could spoil his handsome looks. I thought of carbolic acid. The next day he wanted to go to Brooklyn, so I went with him. I saw the woman and saw that she was very much in love with him. A few days later at the Grand Central Station he told me he had to go to Jersey City. On June 24 I found another letter and on June 25 my husband began looking among some of his papers and I felt he was looking for the letter. He went out and came home about 1:30 the next morning.

At about 3 o'clock on the morning of June 20, I went to the medicine chest and filled a glass with carbolic acid. I threw it on my husband in bed. I did not mean to kill him and when I did not hear him cry but I spoke to him. Then I ran to the street, where I met a doctor. He came to the house and said, ‘He is dead.’”

Coroner Mix, of New Haven, arrived here early today to question Mrs. Sokolowsky. He said a statement would be issued later in connection with the confession the police say she made soon after her arrest. 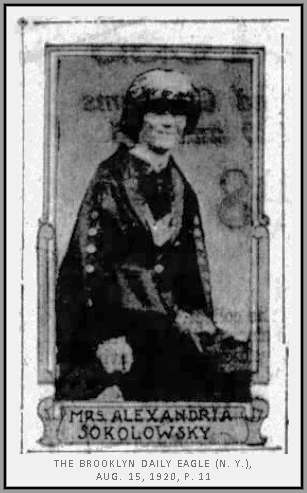 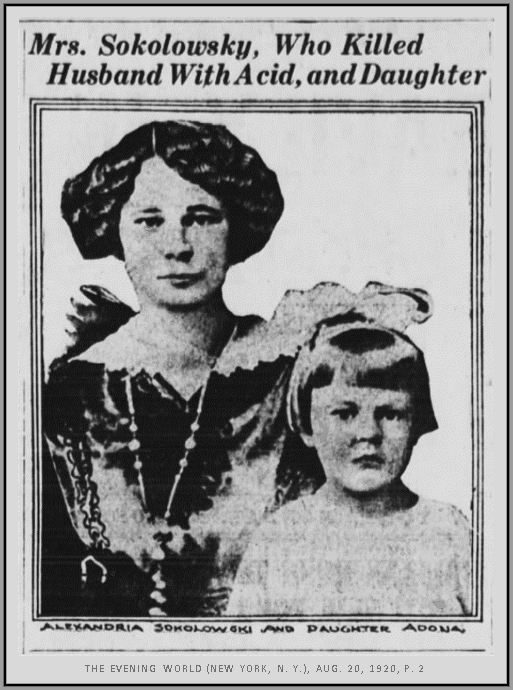 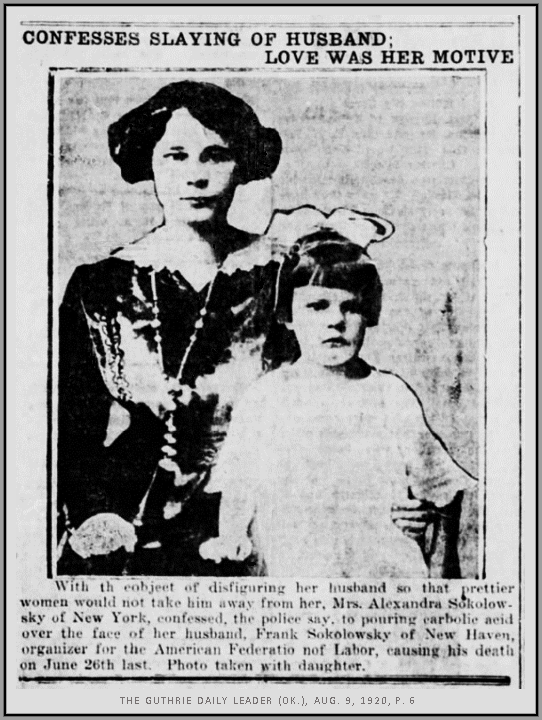