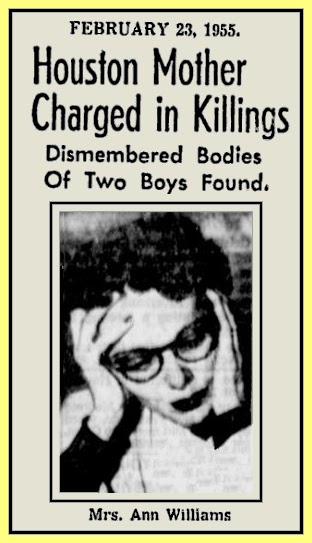 Police say the bodies are those of the 9 and 8-year-old sons of Mrs. Ann Williams, 28-year-old 10-cent store clerk of suburban Pasadena, who had been missing six days.

Clayton Johnson Jr. said Mrs. Williams, a friend of the Johnson family had asked permission, to dump packages of spoiled venison behind his father’s garage. He volunteered to bury them.

Johnson said he returned about nine hours later with a friend dug up the packages after learning that Mrs. Williams and the boys had been missing since last Thursday.

Justice of the Peace A. M. Hickey returned a verdict of murder in the death of each of the boys./ he said they had been dead three or four days.

Mrs. Williams, a slim, quiet-mannered brunette, has been living at a Pasadena tourist court in suburban Houston with the two boys, Calvin, 9 and Conrad, 8. 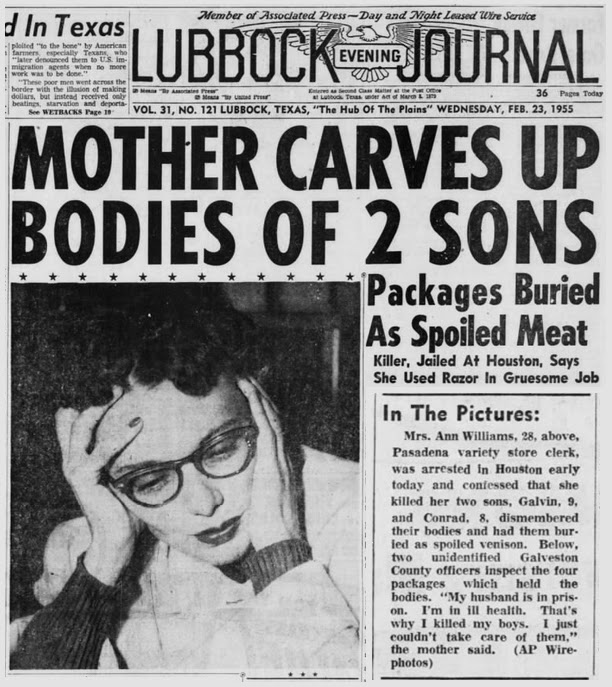 FULL TEXT (Article 2 of 4): Houston, Tx. – a red-haired mother who strangled, dismembered and helped bury the bodies of her two small sons, is “absolutely insane,” a psychiatrist said today.

He indicated that Mrs. Williams who made an abortive attempt to kill herself with sleeping pills on the same night she killed her sons, was “running from reality.”

He described her as “above average intelligence … she has poise and bearing.”

Mrs. Williams says she had no accomplice in the slayings.

She explained her reason for trying to take her life and the lives of her sons, Calvin, 9, and Conrad, 8, Feb. 17.

“I didn’t want them to live in poverty like me when I was a child.”

Investigators say a bank book found in her apartment showed she had $1,000 in a Pasadena, Tex., bank.

Mrs. Williams was arrested early yesterday,  after a young friend revealed he had unwittingly buried the youngsters’ bodies.

FULL TEXT (Article 3 of 4): Houston, Tx., Feb. 23 – Slight Mrs. Ann Williams today calmly related how she slew her two young ones, kept their dismembered bodies nearly a week and had them buried as “spoiled venison.”

“I’m ill and my husband’s in prison. I couldn’t take care of them. That’s why I killed my boys, she said.”

The attractive brunette, 28, was known here as a quiet, well-mannered person.

But the FBI knows her as Annie Laurie Hazel Williams, who took about 50 shots at FBI agents and state police near Smithville, Tenn., as officers sought to arrest her husband as an armed deserter.

The shooting occurred Aug. 10, 1946. No disposition of the shooting or desertion charges is noted in FBI files here.

She was arrested about 4 p. m. today after officers kicked in her front door. She was traced through an automobile she purchased Monday.

Clayton A. Johnson, 19, son of an Algoa Tex., garage owner, yesterday buried four packages which Mrs. Williams told him were spoiled venison. But he became suspicious when he learned she and her two sons had been missing six days. He dug up the packages.

Mrs. Williams, at first denying slaying her sons, broke down after four hours of questioning and told this story:

She gave the boys big sleeping pills “I bought in Mexico.” She moved the bodies at night from their trailer home to An apartment she had rented.

“I put the bodies in a bathtub and left them there two or three days, I don’t know exactly. I took a single edged razor blade and dismembered the bodies.”

She wrapped the bodies neatly in four packages and took them to Algoa in adjoining Galveston County yesterday and asked if she could dump then behind the Johnson garage. The younger Johnson buried them for her.

Another clerk at the dime store started the search which was climaxed in the predawn hours today.

Mrs. Marie Grimes reported to officers that her friend had been missing since last Thursday.

A week earlier said Mrs. Grimes, her friend had given her a sealed envelope with a request to open it “if anything happens to me.”

Mrs. Grimes said the letter held a blank check signed by Mrs. Williams and instructions to take care of the boys until their grandmother arrived. It also contained keys to Mrs. Williams’ 1950 Cadillac. In the meantime, she purchased another car, which led to her location and arrest today.

Her grandmother lives at Mendota, Ill.


FULL TEXT (Article 4 of 4): Houston – Pretty Ann Williams, who says she strangled her two young sons and then dismembered their bodies, hopes to end her troubles in the electric chair, she told police.

Should the attractive redhead be executed she would be the first woman to die in Texas’ lethal chair.

“I wish they’s electrocute me and get it over with,” she told Dr. C. A. Dwayer, Harris county psychiatrist Thursday.

Dwyer said two examinations had convinced him the Pasadena, Tex., dime store clerk is “absolutely sane” although “running from reality.”

“She has poise and bearing,” he said, “ … above average intelligence.”

The bodies of her two sons – Calvin, 9, and Conrad, 8 – were found Tuesday night in a shallow grave near Algoa, Tex., in adjoining Galveston county. A young friend of Mrs. Williams unwittingly buried the bodies after she told him the four bundles contained spoined venison. 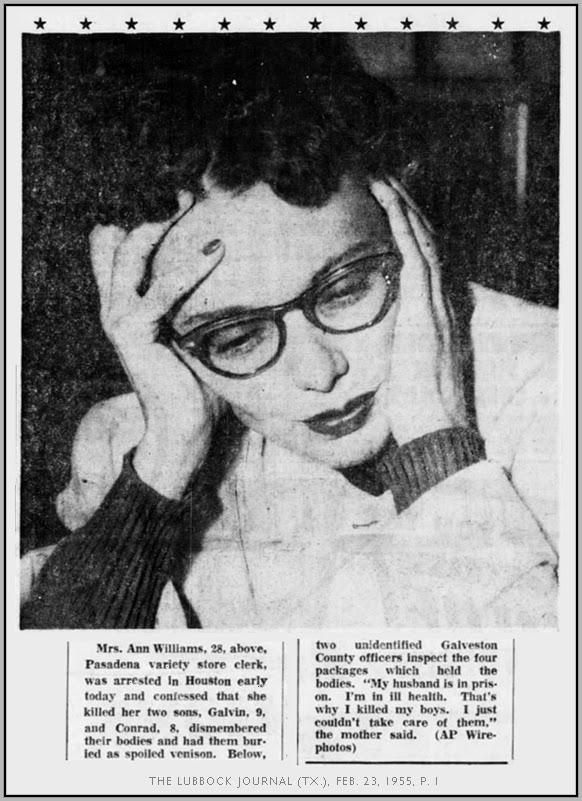 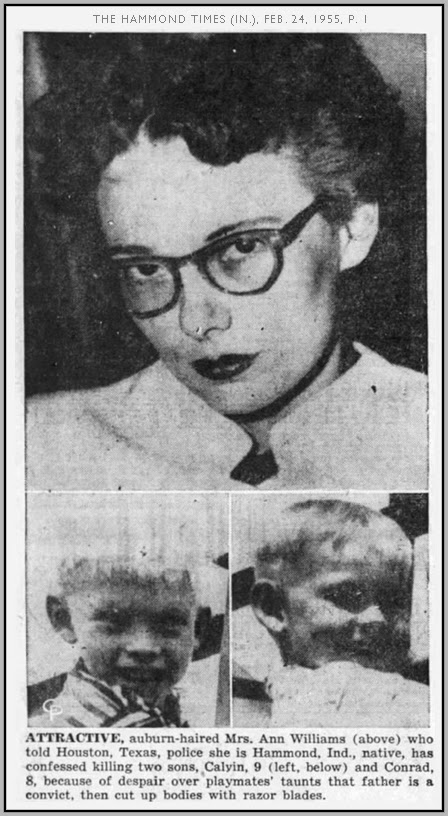 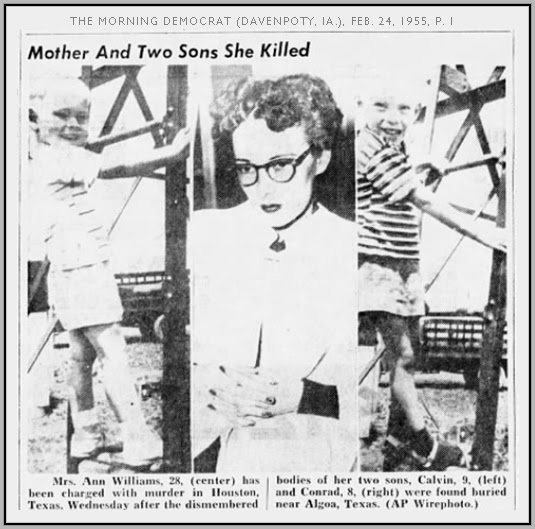 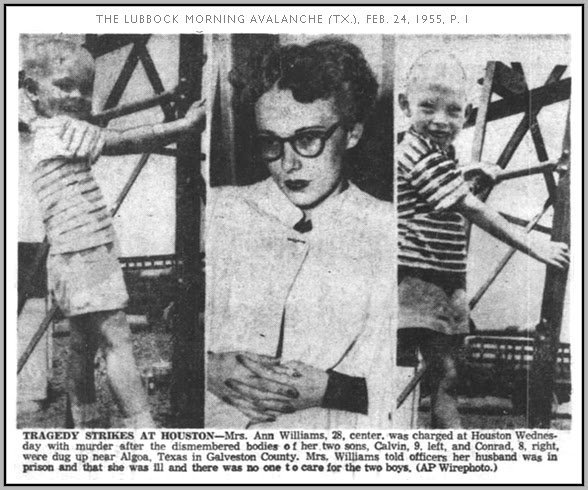 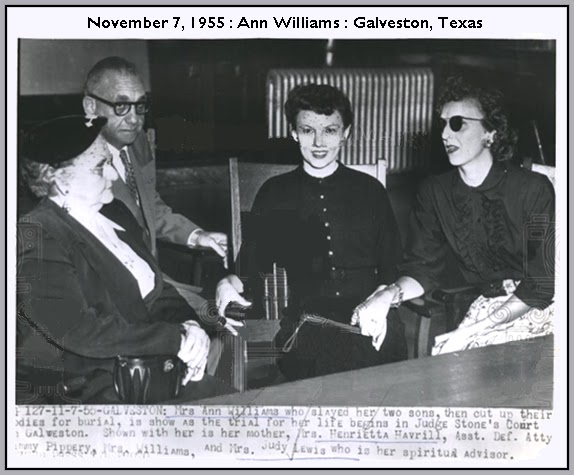