Marie Maharies Hated Her 8-Year-Old Stepson, So She Drowned Him – 1924 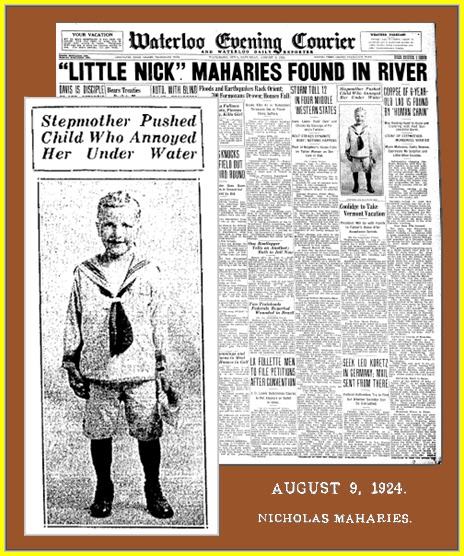 FULL TEXT: Information charging Mrs. Marie Maharies with first degree murder, to be held without bail, was filed this afternoon by A. C. Neilson, assistant county attorney. The question of her mental condition will not be taken into consideration will not be taken into consideration, the county attorney’s office holding the woman sane and responsible for her act, the death penalty will be demanded.

Following serving of the warrant, the self-confessed murderess will be transferred from the police matron’s quarterly to the county jail.

Partially buried in mud, face downward, beneath four feet of water, the body of Nicholas Maharies, six-year-old victim of insane hatred of his stepmother, Mrs. Marie Maharies, sr., who confessed she killed him, was found at 11:30. today by volunteer searchers about 300 yards below the place where he was cruelly thrust in the river Thursday morning.

The body was discover by Francis Hurd, 25, 1602 River street, working in conjunction with a posse organized and directed by G. R. Witt, veteran retired fireman, and possessor of a Carnegie medal for saving the life of a boy on June 17, 1919, under heroic circumstances.

Witt gathered his searching party of a dozen expert river men at a point 20 yards above the place where Mrs. Maharies said she pushed the lad into the stream. Forming a hand to hand chain, the men swept down the river slowly examining every inch of the bottom with their feet. In half an hour, Hurd, who was stationed about 12 feet from the shore, struck a submerged plank. Back of the plank he found the little form held fast.

When told that the body had been found, Mrs. Maharies expressed no surprise, although a genuine note of sadness crept into her voice when she inquired for the meager details. Last evening for the first time she expressed the wish that the body might be found – the first reference she has made to her deed other than when questioned.

This morning the emotional strain seemed to be telling, for she expressed some regret for her criminal action to Mrs. F. C. Stage, police matron, who brought her the news of the finding at noon. Other than that moment of reaction, the woman has maintained the same despondent attitude from the time she was arrested, according to Mrs. Sage, who has been her constant attendant. Since the find no other material change has been observed. She is waiting patiently for whatever might come expressing the hope that it may be death. 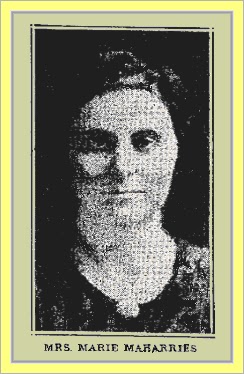 ~ Coroner in Charge of the Remains. ~

The body was taken to the shore and placed upon the bank in a little clearing of the dense underbrush, while Mr. Witt reached the nearest telephone to notify the police that the long search was over. Sergt. Mark Rechtfertig. Lee Smith, patrol driver, and Dr. Sydney D. Smith, county coroner, answered the call and took charge of the remains.

Those who took part in the organized “foot” search, besides Witt and Francis Hurd, were Manuel Hurd, Arthur Harries, Lloyd Avery, Guy Boss, Roy Morain, and several boys whose names were not learned.

News of the finding of the body of “Little Nick,” as he was known and loved in the neighborhood where he lived, spread rapidly in the lower section of the city and scores of men, women and children hurried to the scene. The place could be reached only by several paths that have been beaten by the searchers of the past three days. These soon became choked  with humanity, eager to see the victim of a woman’s insane jealousy and wrath.

Evidence of cunning not previously revealed was given by Mrs. Marie Maharies to her sister-in-law, Mrs. Harry Maharies, when the latter encouraged by reports that her loved nephew might be alive, visited the confessed murderess at the city jail last night.

The stepmother claimed she took a stick to measure the river at several points before she found a place which she felt satisfied would be deep enough to drown the little chap. When she found a point at which she could not touch bottom, she persuaded the six-year-old boy to sit on the bank nearby and throw stones into the water. While he was so engaged, she says, she pushed him from the back, toppling him into the river.

Mrs. Harry Maharies, who cared for the little boy two years following the separation of his mother and father, surrendering him to the stepmother on her marriage two years ago to Nick Maharies, sr., called on the prisoner to attempt to substantiate that the boy was not killed, but given to custody of his mother. Mrs. Maharies, however, maintained her stolid acceptance of her role as murderess and repeated her story without change. 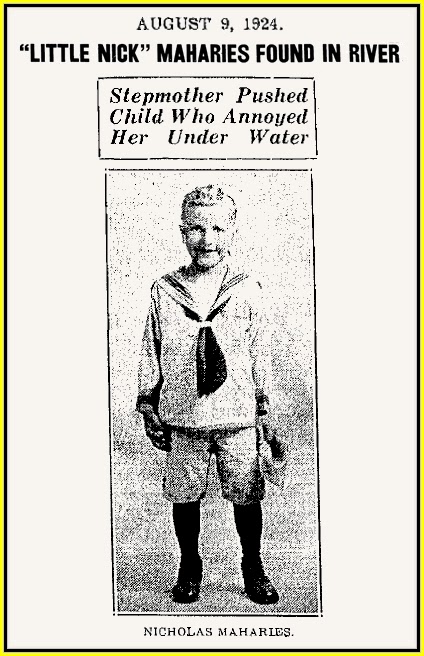 Nick Maharies was divorced from his first wife in 1919, a few months after he entered the army for the world war, according to his brother, Harry. He had two children, a girl and a boy. Until 1921 they were cared for by Mrs. Harry Maharies. The mother having remarried came to Waterloo three years ago and claimed one of the children. The girl, now nine, was given into her custody. She also has a child by her second husband, it is said. They live in a small town near Des Moines, it is believed.

The first Mrs. Maharies in an American-born woman. Mr. Maharies is a native of Greece. He has not visited his wife at the city jail since she was placed under arrest as the confessed murderess of her stepson.

After viewing the body as it lay on the river bank,  and questioning the men who recovered it,  Coroner Smith communicated with the father, Nick Maharies, and it was removed to Petersen Bros. mortuary. An inquest will be held later, the coroner stated.

With the finding of the body in the river, every detail of the stepmother’s story of the crime and her signed confession is proven as the truth. Mute testimony of premeditated murder was the still little form, barefooted, and wearing light blue coveralls, just as he had been seen wearing Thursday morning, trotting along with his stepmother, joyful over promised pleasures down by the river.

Funeral service will be conducted at 11:15 a. m. Sunday at Greek Orthodox church. Rev. Christopher Morkides in charge. Burial will be in Fairview.

The body may be viewed at the undertaking parlors after 8 p. m. today.

[Note: Some sources spell the name with a double “r.”]