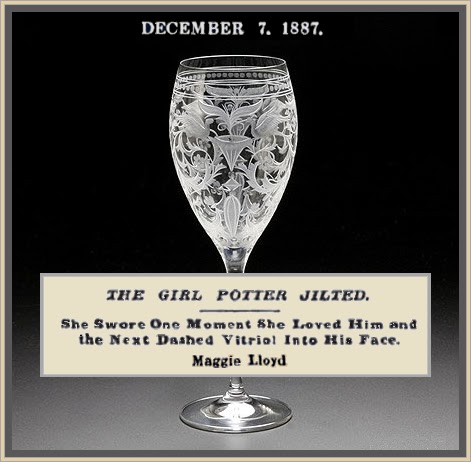 FULL TEXT: Reading, [Pa.], Dec. 6. – Young HOWARD POTTER, who was so horribly burned with vitriol in the parlor of Dr. Frank Rieser by Miss Maggie Lloyd, a few days ago, was able to-day to give his side of the story of the desperate attempt to kill him. Potter is the son of Gen. Potter of Painesville, Ohio, and his mother is a lady of Montreal, where Gen. Potter spends much of his time. The vitriol victim is not yet 21 years of age and quite boyish in appearance. Potter was advised by his parents not to marry on account of his youth, and he meant to obey them. He tried to be manly and straightforward and break off the engagement as gently as possible. He had discovered that Miss Lloyd’s vicious temper might cause him trouble in later years, and rather than risk a life of misery he determined not to marry.

He says he went to Miss Lloyd’s house on Sunday evening, as requested by her note. They calmly sat for nearly an hour, talking over their separation. “I was sitting in an easy chair,” he says,” and Miss Lloyd in another. When I finally told her of my decision she said she felt weak, and excused herself, saying she would go to her room for a little brandy, which she kept there for illness. In a few minutes she returned with a small wine glass filled with dark liquid which I took to be brandy. She held the glass to me asked me to take some. I refused, saying I did not need any. ‘Take some just to please me,’ she continued and once more held the glass toward me. I did not smell anything, but then for the first time I noticed a wicked glare in her black glistening eyes. Just as I refused for the second time she quickly drew back her right hand and exclaimed, ‘Then take it in this way!’ and she dashed the vitriol into my face.

“I had just time sufficient to close my eyes, or I would have received much of the contents in my eyes.  It felt as I red-hot coals were clinging to my face and eating in to the blood. I clapped my handkerchief on my burning face and ran to the kitchen in my confusion and agony I tried to wash the stuff off with water. The heat then became more intense, and I hurried out of the house to a near-by restaurant and sent for a doctor. Miss Lloyd did not hold a handkerchief to my eyes, but she deliberately dashed the vitriol into my face. A few minutes before that she had vowed her eternal love, and said she could not live without me. That is the truth, and reluctant as I am to speak about it, yet the truth might as well be known.”

Miss Lloyd has loft the city for Pottsville. Before going she looked at the scar on her right wrist caused by a few drops of the vitriol that fell on her and exclaimed: “I love that scar I could look at it forever.” Later she said: “I have Welsh blood in my veins and I am proud of it.” To-day slut is in tears and is bewailing her fate, sorry that she ever did such an inhuman act.

Potter will be terribly disfigured to his dying day. The left side of his face will be black and indented like a cancerous affliction. His many friends deeply sympathize with him. When Miss Lloyd first came to Reading she worked in a spectacle factory at $3 a week. Later friends procured her a position as cashier in this city.