“Female Serial Killers Are Rare” – Is What We Hear Really True? 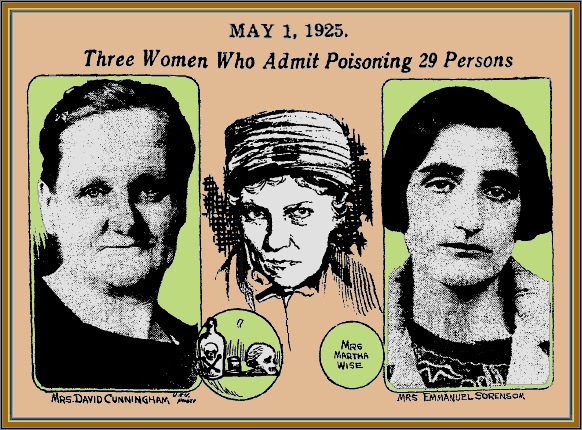 FULL TEXT: Chicago, Apr. 30. – An amazing chapter is being added to the history of American crime by the parallel cases of three women – one from Ohio, one from Illinois and the other from Nebraska – who have recently confessed wholesale poisoning of their kin.

Mrs. David Cunningham of Chicago, admits that she killed her husband and four children. A fifth child, also poisoned, may live.

Mrs. Martha Wise, Medina, O., widow, solved the mystery of the poisoning of 16 persons, three of whom died from the effects, by confessing that she fed them arsenic.

Mrs. Emmanuel Sorenson has all Nebraska amazed with her calmness as she awaits trial on the charge of killing eight persons, including her first husband and three of her own children.

In all three cases the murders were committed over long periods.

The Cunninghams lived on a farm at Bachley Corners, Ind. In 1919 the father died there. His death was much the same in circumstances as those that followed – intense stomach pains, a sudden attack and several days of illness. She collected the $1,000 insurance and the family moved to Gary. A year later a daughter, Isabelle, 28, died. She had been insured for $1,000 just five weeks before her death.

When the last of the boys, David, Jr., was seized with a sudden attack and taken in a hospital, authorities began to investigate the series of deaths in the Cunningham family. The bodies were exhumed, their organs tested, and Mrs. Cunningham arrested. Her confession followed.

Mrs. Martha Wise declares that “the devil made her” poison to death her mother, Mrs. Sophie Hazel, her uncle, Fred Gienke, Sr., and his wife, Lily, and cause the illness of thirteen other relatives and friends. On three occasions she put arsenic into the pails from which Hazels and the Gienkes, living in separate house, drew their water for cooking.

All of the women are declared by alienists to be mentally deficient, all, they say, being sufferers from dementia praecox [the archaic term for schizophrenia], the brain ailment which allowed Loeb and Leopold, highly educated and wealthy Chicago youths, to murder the Franks boy without a shudder.

Mrs. Wise is 41 and the mother of four children, none of whom she attempted to poison. Mrs. Sorenson is 28, Mrs. Cunningham is in her fifties.

Although women are less addicted than men to crime, in all assassinations by poison the percentage of women criminals is extremely high, a phenomenon explained, psychologists say, by the fact that they control the household kitchen. Excluding the Borgia family, the most celebrated poisoner in history happens to have been a woman. Historians are still busy with her. This is the Marquise de Brinvilliers, who, with the notorious Sainte-Croix, poisoned her father and two brothers to get their fortunes. She also administered, on several occasions, doses of arsenic to her daughter and husband, but always changed her mind about killing them, and gave them timely antidotes.

In 1925 there were at least two other confirmed serial killers in the US, and at least three in Europe. For the most famous of these, see: http://unknownmisandry.blogspot.com/2011/07/vera-renczi-used-men-as-disposible-sex.html 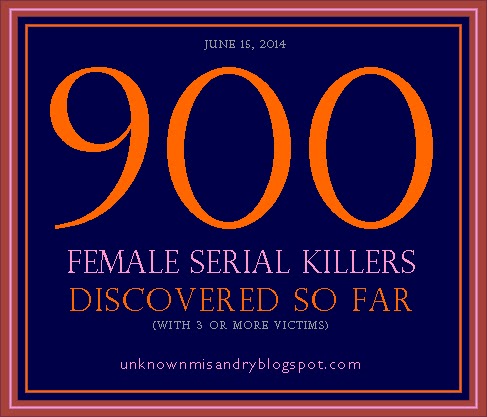 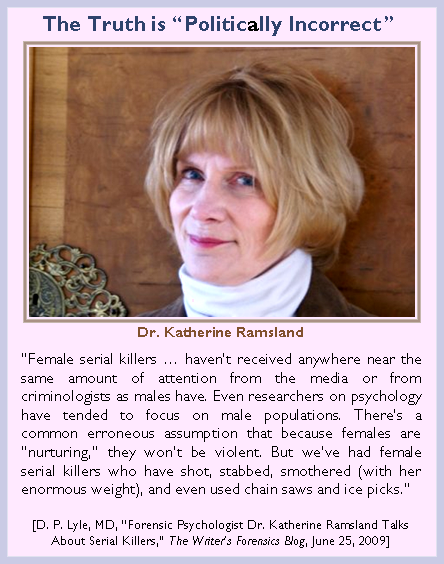 “Female serial killers … haven’t received anywhere near the same amount of attention from the media or from criminologists as males have. Even researchers on psychology have tended to focus on male populations. There’s a common erroneous assumption that because females are “nurturing,” they won’t be violent. But we’ve had female serial killers who have shot, stabbed, smothered (with her enormous weight), and even used chain saws and ice picks.” [D. P. Lyle, MD, “Forensic Psychologist Dr. Katherine Ramsland Talks About Serial Killers,” The Writer’s Forensics Blog, June 25, 2009]