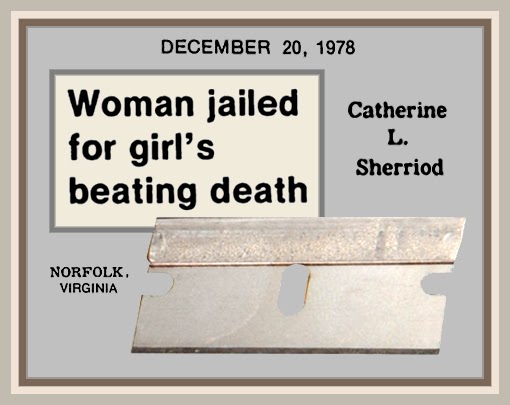 FULL TEXT – Norfolk, Virginia – A woman convicted of voluntary manslaughter in the beating death of her stepdaughter will wait in jail until she is sentenced next month.

The statement of a 13-year-old girl who said her stepmother often savagely beat 10-year-old Gail Sherriod led to the conviction earlier this week.

“Everytime me and Gail be cleaning up the house and Cathy say this ain’t right or this ain’t done right, she jump up and hits us with the same stick,” Doris Sherriod’s statement said.

Gail Sherriod dies Aug. 12 of shock and circulatory collapse brought about by the beatings, an autopsy showed.

In a 10-minute court hearing Monday, Deputy Commonwealth’s Attorney Tommy Miller read Doris’s statement detailing the brutal beatings Aug. 11 and 12 that led to the death of her sister.

While Doris babysat for her infant stepsister, Mrs. Sherriod repeatedly beat Gail for eating cookies and not cleaning up her room, the statement said.

Doris Sherriod said she heard her sister’s screams and saw the wooden stick with which her stepmother beat Gail.

At a preliminary hearing, Mrs. Sherriod testified that the girl had slipped in the bathtub and was listless for hours, refusing to eat or move until she died.

The autoplay refuted her statement.

Charges against the girl’s father, James Sherriod, a bowling alley maintenance man, were dropped because he was not at home at the time of the beatings.

Email ThisBlogThis!Share to TwitterShare to FacebookShare to Pinterest
Labels: Step-Mother from Hell, Torture